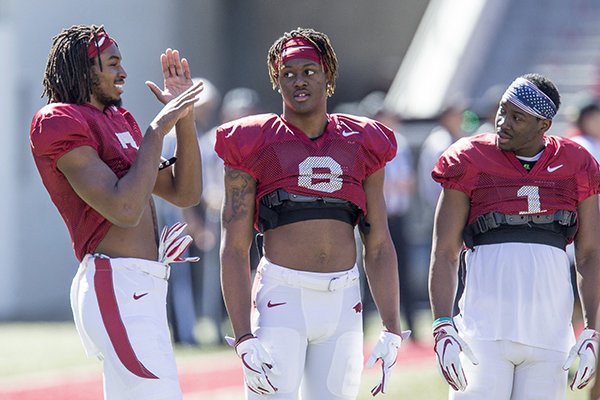 FAYETTEVILLE -- The Arkansas Razorbacks worked inside the Walker Pavilion on a gloomy afternoon Tuesday, and their precision and speed on offense stood in stark contrast to the previous Tuesday's work.

A week ago, there were a bunch of dropped and off-target passes in the swirling wind during the high-tempo early passing periods on the outdoor practice fields.

The incomplete passes were very minimal Tuesday, with overcast skies, periodic rain and lower temperatures moving the workout inside.

The receivers ran sharp, crisp routes, and the quarterbacks delivered on time, with zip on the football.

The Razorbacks (2-6, 0-5 SEC), who host Mississippi State on Saturday at 3 p.m., are responding to the "November to remember" mantra preached by Coach Chad Morris this week.

Junior Nick Starkel ran at the front of individual quarterback drills while Hicks was at the back.

When the full offense came together to match up against the scout-team defense, redshirt freshman John Stephen Jones took the first set of snaps. Jones went 6 of 7 for 49 yards, including an 8-yard touchdown strike to Cheyenne O'Grady, while playing the second half plus a few other snaps in Saturday's 48-7 loss at No. 1 Alabama.

Morris and Craddock said Monday the starting quarterback job was up for grabs.

On the first snap of fifth period, as media members were leaving Walker Pavilion, Hicks came on and threw a rope to Trey Knox on a flag route for about a 15-yard completion.

No quarterbacks were brought in for media interviews Tuesday.

Center Ty Clary delivered kudos to line mate Colton Jackson, who announced Monday he was stepping away from football after suffering chronic injuries.

"It's super sad to see him go away," Clary said. "Awesome teammate, great player. I'll definitely miss him more. I mean, he's an awesome guy. It's the decision he kind of needed to make but didn't want to make. Sometimes it happens."

"Ever since my back surgery last year I have been pushing myself through pain in order to play the game I love," Jackson wrote, in part. "It's disappointing when you put in countless hours of training, practice and rehab each week for it to not even come close to being reflected through your performance and on film and there is nothing you can do about it. But I know God has a plan for me and my future.

"I've had an amazing experience in my 5 years at this University, even though it hasn't ended as planned. I can't complain knowing all it has blessed me with."

Based on post-practice and postgame reports from Coach Chad Morris, the Razorbacks have had 10 players in concussion protocol during the season, with a heavy representation of offensive linemen.

Senior Colton Jackson missed two games while in protocol before retiring this week. Other offensive linemen to engage in the protocol (in chronological order): Ty Clary, Austin Capps and Kirby Adcock. Capps missed the Alabama game due to his head injury, while Adcock is doubtful for Saturday's game against Mississippi State.

In camp, tight end Hudson Henry, defensive tackle Isaiah Nichols and running back T.J. Hammonds all spent time in concussion protocol. Since the season began, Jackson, receivers Treylon Burks and De'Vion Warren, running back Chase Hayden, Clary, Jackson, Capps and Adcock were reported to be in it.

Morris said the athletic training staff, with David England as director and Dave Polanski as head trainer for football, is continually studying and monitoring the team's concussions.

"Are they in games or in practice? If you're in practice, what part of practice? So we're on that," Morris said. "Our medical staff does a tremendous job of supplying the information.

"We've had quite a few occur during the course of a game, more than I can remember. Once that happens, we immediately go into the protocol and start that process. But we're definitely on top of it and analyzing a lot of things on it."

Junior center Ty Clary came out of last week's loss to Alabama with a shoulder injury, but he was back at practice Tuesday.

"We were running a screen, and I came out to go fit up the linebacker, which is my assignment, and then I lowered my shoulder into him," Clary said. "I already wear a brace on that shoulder, because I kind of banged it up in fall camp. It just kind of came loose."

The Arkansas receivers combined for one catch -- Treylon Burks' 15-yard grab in the first quarter -- in last week's 48-7 loss to Alabama.

"Yeah, the football didn't go our way," sophomore wideout Mike Woods said. "We had a lot of plays that were real close to going, but just didn't bounce our way last week."

That marked the first time Razorbacks' receivers had one reception in a game since a 52-7 loss to South Carolina in 2013 in which Javontee Herndon had one catch for 20 yards.

Brandon Allen, the former Fayetteville High School and Arkansas quarterback, is scheduled to make his NFL debut on Sunday as the Denver Broncos' starter against the Cleveland Browns.

Bobby Allen, Brandon's father and a longtime Arkansas assistant coach who is now the Razorbacks' director of high school and NFL relations, said a family contingent of more than 10 will attend the game in Denver.

"We're really excited for him," Bobby Allen said. "Obviously, he's worked hard to get this opportunity.

"I don't like the fact a guy got hurt to get the opportunity, but in the game of football you've always got to be the next guy up."

Allen is starting in place of Joe Flacco, who is out with a herniated disk in his neck.

"I think he's ready. He's prepared," Bobby Allen said. "In his mind, each week he's prepared himself to get out there and play."

On the Air with Chad Morris airs Wednesdays at 7 p.m.

Cunningham, of Warren, Ohio, has made six starts, three at right guard and three at left tackle, and has permitted one sack in 255 pass protection plays out of his 445 snaps.

Pool, of Lucas, Texas, has 54 tackles, fourth on the team, while starting all eight games. Pool has 3.5 tackles for loss, with 3 pass breakups and a hurry.