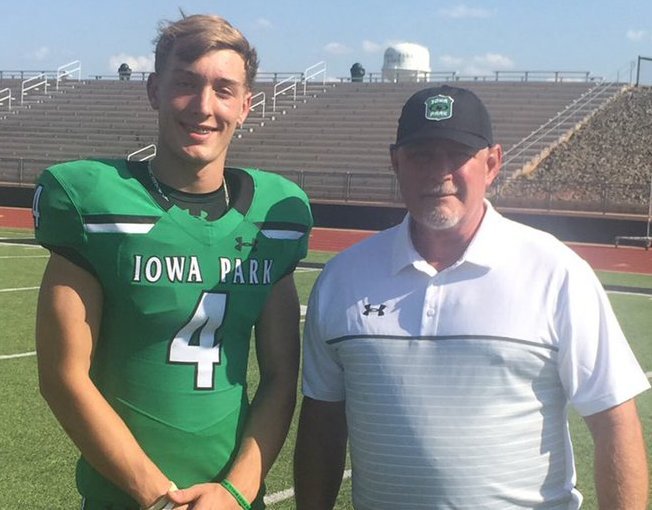 About three weeks after sending game film to Arkansas, junior athlete Cirby Coheley will make his way to Fayetteville for a visit.

Coheley, 6-4, 195, 4.63 seconds in the 40-yard dash, of Iowa Park, Texas, plans to visit the Razorbacks for the Mississippi State game on Saturday.

Being that Iowa Park is about 10 miles from Wichita Falls and near the Oklahoma border, it is not a hotbed for college recruiters. Coheley discovered that after living in the Dallas-Fort Worth area until about two years ago.

“Definitely more looks in that area and Dallas and the metroplex than here,” said Coheley, whose father, Craig, is an assistant coach at Iowa Park. “We’re a little bit under the radar.”

Coheley has recorded 36 tackles, five tackles for loss, seven pass breakups and two forced fumbles along with an interception this season at outside linebacker. He has 35 catches for 562 yards and four touchdowns at receiver, and 190 rushing yards and six scores.

As a sophomore, he completed 22 of 52 passes for 508 yards and four touchdowns while catching 23 passes for 315 yards and four more touchdowns. He had 39 tackles, four tackles for loss, 13 pass breakups, two forced fumbles and an interception. He was named District 5-4A Utility Player of the Year.

Coheley also plays baseball, basketball and runs a leg on the 4x100 meter relay and the 4x200. He was part of a group that finished sixth in the region in the 4x100 relay. He earned District 5-4A first team All-District honors in baseball and basketball as a sophomore.

His size and frame makes him an intriguing prospect.