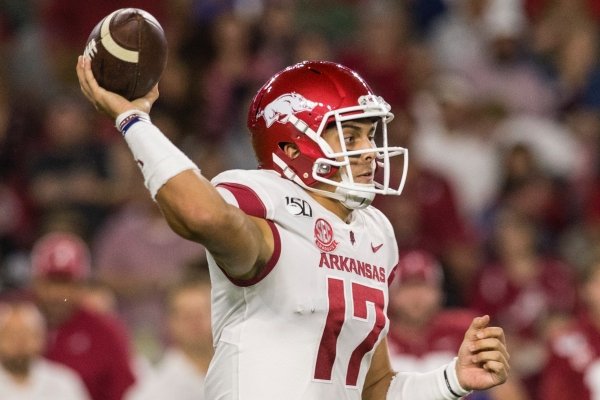 Nick Starkel, Arkansas quarterback, throws the ball in the second quarter vs Alabama Saturday, Oct. 26, 2019, at Bryant-Denny Stadium in Tuscaloosa, Ala.

FAYETTEVILLE -- The University of Arkansas' offense can put up points, as evidenced in the Razorbacks' 55-point outburst against Colorado State.

To make that kind of result more of the norm, the Hogs have to maintain balance between the run and pass and find their cast of receiving playmakers more frequently.

Rakeem Boyd and Devwah Whaley have provided a solid 1-2 punch at tailback; Cheyenne O'Grady has established himself as one of the best tight ends in the country; and the young receivers -- headlined by freshmen Treylon Burks and Trey Knox, and sophomore Mike Woods -- seemingly have been on the brink of breaking out throughout the year.

As the Razorbacks (2-6, 0-5 SEC) enter their final four-game stretch of the season, starting with Saturday's 3 p.m. game against struggling Mississippi State (3-5, 1-4 SEC), the offense also is looking for consistent blocking and protection from a banged-up offensive line.

And finally, the Razorbacks are seeking a quarterback who can start fast and finish strong. Not since Nick Starkel went the distance in that 55-34 victory over Colorado State on Sept. 14 has an Arkansas quarterback turned in an impressive full game.

Starkel, with five starts, and senior Ben Hicks, with three, have shared the role as the top quarterback, but after last week's 48-7 loss at No. 1 Alabama, new options have emerged.

"We had a package for John Stephen last week, and I thought he came in and did a nice job," offensive coordinator Joe Craddock said. "We'll continue to grow that and continue to get him ready with reps as well."

Morris likened Jones' work in the RPO package to the offense run by Mississippi State with freshman quarterback Garrett Shrader.

"It's the dimension of his ability to run the football," Morris said. "Very similar to what Mississippi State does with Garrett. He's a big part of their run game, and it's a lot of the zone-read game.

"If you're reading the end, the end boxes and he gives the ball underneath, it takes the extra hat out of there because he's accounting for the quarterback. If the end squeezes and he pulls it, then you get your quarterback up on a safety or out in the flats.

Arkansas' quarterback options do not end with Hicks, Starkel or Jones. True freshman KJ Jefferson has not played yet, meaning he could participate at will in the final four games and retain his redshirt season.

Morris and Craddock said the quarterback competition is wide open.

"You get crossover film throughout the course of the season, and certainly Starkel, Hicks and the young kid Jones came in and did a nice job at the end of the Alabama game and led a touchdown drive," Moorhead said. "So it's difficult to prepare for all three. I don't know the system necessarily changes based on who is in the game, but you certainly have seen glimpses of production out of all three of those guys."

The glimpses haven't been lengthy enough for the Arkansas offense to maintain a solid level of production.

Last week, Starkel threw three interceptions to hike his season total to 10. The Razorbacks opened that game with three drives of 20-plus yards to midfield, but could not sustain that momentum after a fumble and interception led to a 17-0 Alabama lead. Hicks had not recovered enough from a left shoulder injury and did not play against the Crimson Tide.

Jones was in on four running plays that netted 29 yards in the second quarter, then guided a 13-play, season-long 85-yard touchdown series that ended on his 8-yard touchdown pass to O'Grady.

The wideouts had only one reception, though they were targeted numerous other times, against Alabama.

"It obviously didn't feel good, but we had a lot of plays that were real close to going that didn't go," Woods said. "That's just football. Sometimes it's not gonna go your way. You have to come back and work."