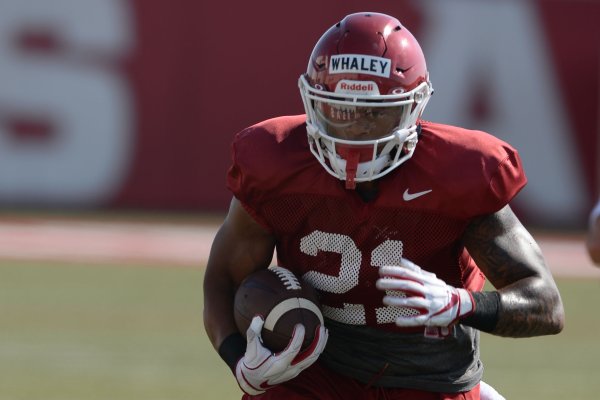 Arkansas running back Devwah Whaley carries the ball Tuesday, Aug. 20, 2019, during practice at the university's practice facility in Fayetteville.

FAYETTEVILLE -- University of Arkansas tailback Devwah Whaley is one of the more buttoned-up Razorbacks, but the senior left the running back group in stitches during drill work Tuesday.

After Rakeem Boyd's rep on the drill -- in which the running back ran a couple of steps, left his feet, smashed a dummy with his right shoulder and landed on a huge padded mat -- running backs coach Jeff Traylor called out "perfect" to describe the rep.

Then it was Whaley's turn.

Whaley ran to the mat, jumped in the air and brought his right elbow down on top of the dummy as if he were executing a wrestling move.

While the running backs, including Whaley, broke up in laughter, Traylor -- who calls Whaley "Beaumont" on occasion in reference to his home city in Texas -- just stared at the senior.

Whaley dutifully returned to the front of the line and performed a perfect rep on the drill, but he continued laughing after the fact.

Senior guard Austin Capps did not practice again Wednesday after missing the Alabama game due to concussion protocol. His backup, Kirby Adcock, went out with a concussion in the loss to the Crimson Tide. Shane Clenin is targeted to start at that position Saturday.

Junior tailback Rakeem Boyd was the lone Razorback in a green no-contact jersey, as he was on Tuesday. The coaches are taking it easy on Boyd's sore right shoulder.

Asked the difference in Starkel since his big game against Colorado State and now, Craddock referenced his performance against San Jose State, when the junior threw five interceptions in a 31-24 loss.

"I think the week after that [Colorado State] game was tough on him, whatever it may have been," Craddock said. "I think he lost a lot of confidence in that game. We've tried to bring his confidence back.

"Last week going into the Alabama game, I felt like he was starting to feel it again. We've just got to continue to love on him, be there for him and try to work him through this process."

Coach Chad Morris said the coaching staff had to do a great job of making sure the decisions Starkel makes are comfortable for him. Starkel threw three interceptions in the first half in the loss to the Crimson Tide.

"We limited a lot last week to try to keep that going," Morris said. "Some of those he had pressure in his face and couldn't follow through on some of the throws.

"At the end of the day, you know we've got to protect the football, and that's what this whole thing's about. And to be able to do things he feels extremely comfortable and confident doing."

Coach Chad Morris said the plan is for junior running back Chase Hayden, who already has played in four games, to redshirt this season.

Hayden has 12 carries for 39 yards, and 4 receptions for 12 yards in light duty. He hasn't played since suffering a concussion on a kickoff return in Week 4 against San Jose State.

Rakeem Boyd and Devwah Whaley have handled the running back duties, with spot action from T.J. Hammonds, the past four games.

"Right now with where we're at with our running back position, he's already played in his four games," Morris said Wednesday. "Our plan right now is to try to redshirt him if we can."

The Razorbacks were not penalized in Saturday's loss at Alabama. The Crimson Tide declined the only flag thrown against Arkansas, an offensive pass interference against Trey Knox on Trevon Diggs' 84-yard interception return for a touchdown.

"I don't ever recall going through a game without any penalties," Coach Chad Morris said. "That was a shocker."

UA officials said this week their records showed it was Arkansas' first game without being assessed a penalty since at least 1997. Research is still ongoing to clarify when the Razorbacks last played a game without a penalty.

For the season, Arkansas is No. 25 nationally with 44.6 penalty yards per game, and tied for No. 31 with 42 total penalties.

Arkansas' average starting field position against Alabama last week was its own 23. Those starting spots included the Razorbacks' own 2 after Nathan Parodi stepped out of bounds while fielding a kickoff, its own 15 after an Alabama punt in the third quarter, and its own 4 when the Razorbacks stopped Alabama on downs late in the game.

By contrast, Alabama's average starting field position was its own 45. That advantageous position was helped by a 37-yard fumble recovery to the Arkansas 14; two interceptions in Arkansas territory, including a return to the Hogs' 25; and a punt from the Arkansas 4 to its 48.

"Good D-linemen getting their hands up," Arkansas offensive coordinator Joe Craddock said. "We've got to do a better job cutting them down."

Craddock said he and offensive line coach Dustin Fry have talked about linemen cutting their opponents if they set up to jump.

"When they jump, we've got to start pushing them over," Arkansas center Ty Clary said. "I mean, that's the solution. If they jump and you push them down, they probably won't jump again."

[Video not showing up above? Click here to watch » https://www.youtube.com/watch?v=31jhpxNmYdI]

Freshman tight end Hudson Henry, who has not played this season, is expected to start taking game-day reps now that he's clear to have a redshirt season.

"He's ... kind of figuring out what it takes to play at this level, what it takes to be a successful tight end in this league," said his brother, junior linebacker Hayden Henry. "And yeah, I'm excited. I hope he gets a shot on Saturday. I think he'll prove a lot of people ... right I guess."

Said Chad Morris: "We anticipate playing Hudson this week. I think he's really been developing and coming along really well for us. So we're excited about seeing him on the field a little bit this week."

Junior center Ty Clary will serve as the offensive captain Wednesday for the second time this season. He'll join permanent defensive captains McTelvin Agim, De'Jon Harris and T.J. Smith as he did earlier this season for the Hogs' 31-24 loss to San Jose State.

"I thought he had a good day [Tuesday]," Morris said. "He'll respond to the challenge. He's a great competitor. It's just something that you deal with. You just come back to work, you put your head down and you try to get better. That's what he did [Tuesday]."