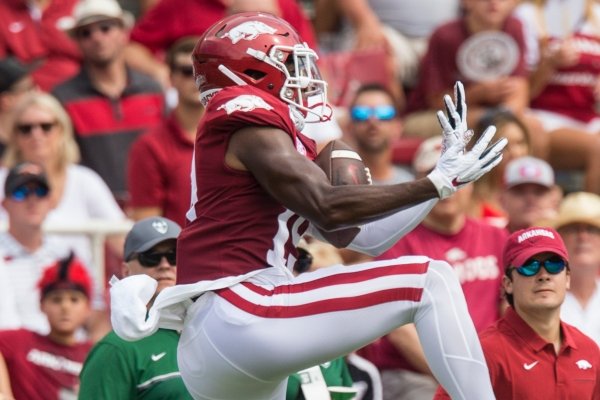 The Razorbacks ran 47 out of 77 offensive snaps, 61% of their plays, in Portland State territory or at the 50-yard line. They racked up 26 first downs, 395 yards of total offense, averaged 5.1 yards per play, committed zero pre-snap penalties and owned an advantage in time of possession of 7:16.

"We had 11 possessions, and we had four 10-play drives or more, which was really good," University of Arkansas Coach Chad Morris said.

But the advanced metrics tell the story behind the reality of the Razorbacks' less-than-scintillating 20-13 victory over the Vikings.

The Razorbacks had a bunch of dropped passes -- five by offensive coordinator Joe Craddock's count and seven by the accounting of Pro Football Focus. They converted just 5 of 15 (33%) third-down plays.

"We were moving the ball successfully," Craddock said. "It's been the finish. We've got to learn to finish the drive. And I don't think we did a very good job with that."

The Razorbacks did not, particularly late in the first half.

After safety Kamren Curl's 29-yard interception return to the Portland State 18, the Razorbacks turned it right back over when quarterback Nick Starkel did not see a linebacker -- who dropped back to the 5-yard line over the middle -- and threw an interception.

Then there was the clock-management fiasco to end the half. With about 12 seconds remaining, the clock running and the Razorbacks out of timeouts, Morris signaled for Starkel to spike the ball on third down at the Portland State 19. However, several staff members were signaling to Starkel to run another play, which he did.

Arkansas snapped the ball with about six seconds left, Starkel hit Rakeem Boyd on a short throw to the right, and Boyd fought his way out of bounds just as the clock expired.

The Razorbacks also had a few timing issues between quarterback Ben Hicks and the receivers, as the wideouts didn't get enough depth on a few plays, and Hicks threw behind them on a few other pass plays.

Craddock gave Hicks and Starkel "OK" grades, taking off mainly for not carrying out their fakes long enough.

"I know there were a couple of balls that Ben would like back," Craddock said. "I counted about five drops and about three throwaways. So you take that away from his stat line ... he's up there in that 66% range of completions.

"The three throwaways, I've got to call a better play. The five drops, we've got to make those plays. We've got to execute and be sharper and we'll be OK."

There's another layer to the moderate offensive production. The Razorbacks wanted to keep a large array of their sets and plays under wraps until later to force SEC teams to make in-game adjustments.

"We were very basic by design, for a few reasons, one of those being Week One and a lot of unknowns," Morris said. "And two was some of the scheme and the way that they aligned, there was some uncertainty ... on how they'd play us on the back end of things. So by design we were vanilla, especially knowing we were going into a conference opener this next week."

Some things did go right for the Razorbacks, such as the running game. Rakeem Boyd rushed for a career-high 114 yards and a touchdown while averaging 6.3 yards per carry.

Boyd was named the coaching staff's offensive player of the week Monday.

"I thought we ran the ball well," Morris said. "Not great, but well. We left a lot out on the field.

Burks averaged more than 17 yards per catch with 3 grabs for 52 yards. Woods had a game-high five catches for 30 yards, but he slipped on a quick hitter at right end for negative yardage on a play that might have broken open for a big gain.

Craddock and Morris believe the rhythm with timing and depth between the quarterbacks and receivers will improve.

"I thought a few of the balls were in the radius of a receiver that you would hope that we could make those catches, but when you put young guys out there in the first game, things are going to happen," Morris said.

"We're not disappointed in those guys for dropping the ball. They're going to make those catches. They've made them a thousand times at practice. You wish you had a guy that could throw the perfect ball, but that's not going to happen. We've got to make sure when it's in that catch radius, we have to make the catch. That'll come."