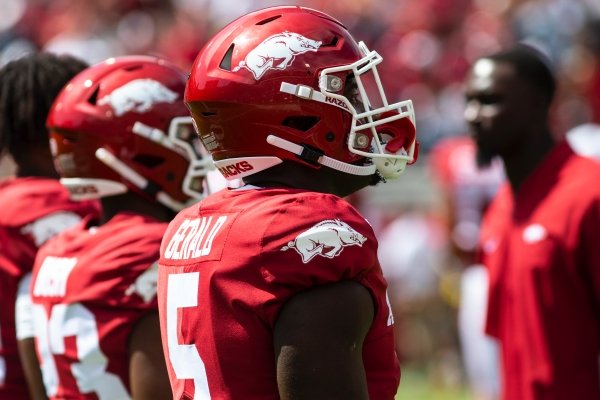 FAYETTEVILLE -- University of Arkansas defensive end Dorian Gerald strained an artery in his neck against Portland State and will miss the rest of the season, Coach Chad Morris said Monday.

Morris said Gerald, 22, has been put on blood thinners and hopes to be released from the hospital today.

Gerald, a senior who has a redshirt season available, tweeted Monday that the injury isn't career-ending, "but it definitely is an injury that my coaches and family want me to watch carefully." He added that after redshirting, "I'll be back next year stronger than ever."

Morris said it's probably too early to know for certain whether Gerald will play next season.

"I think it will not be something we'll know for quite some time," Morris said. "I think that we're several months away from knowing that as tests will continue to be run."

Morris, who spent time at the hospital with Gerald and his family Saturday night and Sunday, praised Arkansas' training staff and team doctors for quickly recognizing Gerald had a serious medical situation.

"We were very fortunate," Morris said. "Those things are always tough to deal with, but the way our medical team handled it was first-class and right on point. The good news is he's going to be OK. He's on the road to recovery."

The injury occurred in the second quarter, and Morris said there didn't appear to be a precipitating event.

"There was nothing that showed up as far as a hit," Morris said. "It could have been as easy as your neck getting strained in a certain way. We don't know. It just kind of puzzled us all. It was very frightening."

Senior Jamario Bell is expected to start at end opposite Gabe Richardson at Ole Miss on Saturday. True freshmen Mataio Soli, Zach Williams, Collin Clay and Eric Gregory, who returned from an ankle injury last week, are the backup ends.

Soli suffered a broken bone in his right hand against Portland State and will wear a cast, but he's expected to be available against Ole Miss, Morris said.

Arkansas defensive coordinator John Chavis said he expects the hard work Gerald has put in to pay off next season.

"In this game you get injuries and you've got to get people ready," Chavis said. "That's why in the fourth period we played a lot of young people. If we sit there and don't get them in the game, and then all of a sudden we have to get them in the game and they haven't been there, it's going to be different for them."

"I think C.J. brings another dimension to our team," Morris said. "We all know what he's capable of doing. We know what he did last year."

O'Grady had 30 receptions for 400 yards and 6 touchdowns last season despite being suspended for the first two games.

Senior guard Austin Capps is expected to be available after coming out of the opener with an apparent leg injury.

"Both of these young men played about as well as I've seen these guys play since we've been here," Coach Chad Morris said.

"I thought Kam Curl probably played as good as he has played," defensive coordinator John Chavis said. "I thought he was very solid on the back end. Kam made a lot of big plays for us, but I kind of expected that.

"When you start breaking it down in the offseason, not that all our kids haven't gotten better, but he probably made the biggest improvement, so I'm not shocked to see him play as well as he did."

Defensive coordinator John Chavis, after noting his unit would have played better if it had contained the scrambling of quarterback Davis Alexander, hammered home a point.

"One thing that I want you to make note of: Our kids played relentless," Chavis said. "Did we make mistakes? Absolutely. And that's coaching.

"We've got to fix that and help them, but in terms of effort, if we play that way every week then that's going to put us in position to win more ball games."

Alexander had 8 scrambles or runs for 56 yards in gains, which were offset by 6 sacks for 29 yards in losses.

"Certainly we had some concerns with this team that we played, and we knew the quarterback could extend drives with his feet, and we didn't do a good job of that, as you saw," Chavis said. "If we had done a better job of that, then we'd have played better."

Ole Miss receiver Braylon Sanders, one of only two Rebel wideouts with more than two receptions last year, did not play in the second half of Saturday's 15-10 loss to Memphis after suffering a hamstring injury. He is questionable for Saturday.

Outside linebacker Qaadir Sheppard suffered a hand injury in camp and played with a heavy wrap on his left hand versus Memphis. Sheppard played defensive end last season.

Right tackle Alex Givens is probable against Arkansas after playing about half of the game last week. Givens missed all of camp after having a surgical procedure on his back in the summer.

The loss of Dorian Gerald to a season-ending injury in his neck marked the fourth consecutive season opener in which the Razorbacks lost a defensive starter for a solid length of time.

Cornerback Kevin Richardson suffered a season-ending torn pectoral muscle in 2016 against Louisiana Tech; cornerback Ryan Pulley had the same season-ending injury in 2017 against Florida A&M and linebacker Dre Greenlaw suffered an ankle injury against Eastern Illinois last season that caused him to miss the next two games. Greenlaw was slowed by the injury the rest of the season and missed two more games.

Arkansas offensive coordinator Joe Craddock said on quarterback evaluations of senior Ben Hicks and junior Nick Starkel that "both graded out OK. The biggest things that hurt their grade was not carrying out their fakes enough."

Craddock said there were a few things that can get cleaned up for both of the quarterbacks.

"I don't think Nick did anything to overtake Ben," he said. "I think if he goes in and throws a touchdown over the top instead of an interception, we may be talking something different. I think Ben played good. He protected the football and managed the game."

Hicks took one sack and did not commit a turnover in his 70 snaps. Starkel was not sacked but threw an interception to a linebacker he didn't see near the Portland State goal line in the second quarter.

Sam Loy had four of the Razorbacks' five punts, and all of them came from between the Portland State 35- and 45-yard lines. Three of his punts landed inside the Vikings' 10-yard line, but two of them caromed quickly into the end zone with players in between the ball and the goal line.

Loy was named special teams player of the week by the Arkansas coaches.

"First of all, I was excited that we caught the punt, finally, to down it inside the 5," Coach Chad Morris said. "Those are things, first game, that you get better at. That won't happen anymore. But I thought our special teams played well."

Portland State punt returner Beau Kelly had a fair catch on a 33-yard Loy punt to the 12.

The upshot: Arkansas averaged 35.6 yards per punt to rank 106th in the nation. The Hogs' net punting of 27.6 ranked 113th after Saturday.