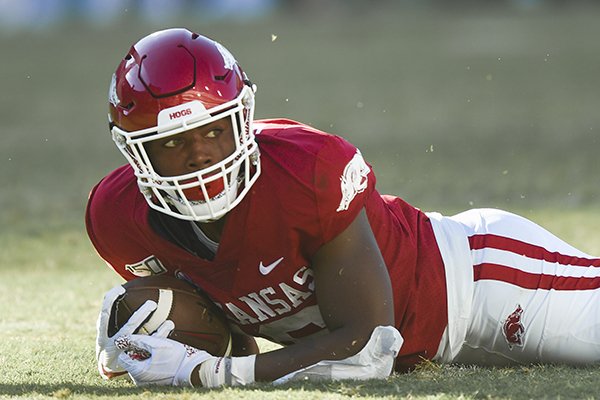 Arkansas receiver Treylon Burks is shown after catching a pass during a game against Portland State on Saturday, Aug. 31, 2019, in Fayetteville.

FAYETTEVILLE -- Treylon Burks and Trey Knox signed with the Arkansas Razorbacks as part of a celebrated group of wide receivers, and both made solid contributions as starters in their first collegiate game Saturday.

The rookies were both available to the media for the first time this season on Tuesday based on Coach Chad Morris' policy of true freshmen having to see playing time before they do interviews.

"It was a great experience," Burks said of the Hogs' 20-13 victory over Portland State. "I had fun playing out there with my brothers. We worked hard all summer to get to where we're at."

Burks caught 3 passes for a team-high 52 yards, and returned 2 punts for 16 yards. Knox had a 38-yard reception and was targeted a couple of other times.

[Video not showing up above? Click here to watch » https://www.youtube.com/watch?v=VfP2U3Bqta0]

"It shows what we have coming in the future, and to just get our feet wet for this year," Knox said.

Both freshmen said they feel like better things are in store, starting this week at Ole Miss.

"I think we're going to put a lot of points up in this game," Knox said.

"They're pretty good," Burks said of the Ole Miss secondary, "but I feel like we're going to dominate, just being honest with you."

Burks got his first playing time since going down with a torn knee ligament about halfway through his senior season at Warren.

"It was a big learning experience," Burks said. "I mean, it was my first time playing since last year, so that was a little nerve-wracking."

Burks reached out to grab his surgically repaired knee after a 5-yard punt return in the fourth quarter.

"It just scared me," Burks said. "That's the first time I got hit on my knee since I've had knee surgery. It was just a scare."

Knox was tough on himself for his dropped pass on third and 8 early in the second quarter.

"Yeah, we needed that one," Knox said. "I came across the middle. I didn't think it was going to get through, but I should have been prepared for it. But it's not going to happen again."

Arkansas quickly has hit a crisis point with its defensive ends. The loss of senior Dorian Gerald for the season with an arterial issue in his neck knocked out the Razorbacks' best pass rusher.

But he's not the only ailing defensive end.

Senior Jamario Bell sat out Tuesday's workout with an undisclosed injury, while freshman Mataio Soli wore a heavily wrapped club on his right hand after suffering a fracture in the opener.

Soli paired with senior Gabe Richardson on the first unit during the early part of practice Tuesday.

The second pair of ends were true freshmen Zach Williams and Collin Clay. Another true freshman, Eric Gregory, who is a few weeks removed from surgery for a high ankle sprain, would be next on the depth chart.

Tight end Cheyenne O'Grady was back at full go in a white 85 jersey Tuesday, while tight end Chase Harrell -- who came off the field at one point on Saturday clutching a shoulder -- wore a green (no-contact) jersey. Harrell returned to the game after his injury.

Linebacker D'Vone McClure, who came out of the game with an undisclosed injury, also wore a green jersey Tuesday.

Offensive guard Austin Capps, who suffered a left foot or ankle injury in the game, did not participate in practice. Offensive tackle Colton Jackson engaged in individual work but not the early team period.

With guard Austin Capps out and tackle Colton Jackson limited with his foot injury, the left side of the offensive line consisted of tackle Myron Cunningham and guard Kirby Adcock during the first team period. That duo paired with center Ty Clary, right guard Ricky Stromberg and right tackle Dalton Wagner during the early team period.

Nickel back Greg Brooks had a pass breakup and no tackles in his first college game. He said he expects things to get better.

"I know what to do now," Brooks said. "I know what to expect. The game is a lot faster, making the transition from high school, but I think I did good. The defense did good."

"He said, 'Play more your style. Don't be laid back. Be more aggressive,' " Brooks said. "Stuff like that."

Joe Foucha, who had one of Arkansas' three interceptions in the opener, enjoyed the blitzing he and fellow safety Kamren Curl got to do against Portland State.

It reminded him of how defensive coordinator John "Chief" Chavis and safeties coach Ron Cooper employed Tyrann "Honey Badger" Mathieu during his time at LSU.

"I mean, to be put in that position, that's something I've always wanted to do," Foucha said. "Watching Tyrann Mathieu, of course he was in that scheme with Chief and coach Coop, so us coming off the edge and sending that pressure shows we can come down and play in the box and cover. It just shows a lot of things we can do."

"I like their new quarterback," MacIntyre said. "He does a good job. He understands the offense.

"To me, even watching film from last year and this year, he's making more checks. He's getting to the right play. Looks like he's going with the ball quicker to the right receiver like Chad [Morris] would want. That's what I notice there."

Coach Chad Morris will be joined by junior safety Kamren Curl and sophomore wide receiver Mike Woods during his weekly radio show On the Air with Chad Morris tonight.

"He'll probably play, I would imagine," Craddock said. "I don't know when, but it's all about how you practice. We've got to have a good week of practice. We're consistently evaluating those guys, and obviously you've got to go with the guy that gives us the better chance to win.

"We'll see this week in practice how it looks, but I would imagine he would play at some point."

• Connor Limpert went 1 of 2 on 37-yard field goals during the early team periods. The left-footer pulled his first try wide right, then knocked the second one down the middle.

• The temperature was 88 degrees during practice, but the heat index soared to 95 degrees Tuesday, making it one of the hotter days since the start of camp.