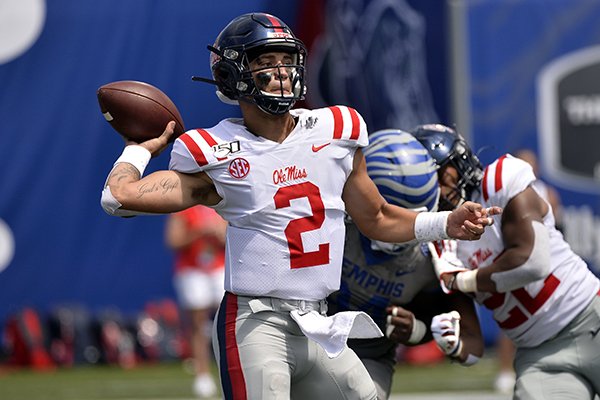 FAYETTEVILLE -- Ole Miss ranks 127th nationally in total offense and last among all Power 5 conference teams going into its SEC opener against the University of Arkansas on Saturday night at Vaught-Hemingway Stadium.

The Rebels gained 173 yards in losing at Memphis 15-10 to open the season last week. It was an underwhelming debut for Rich Rodriguez as the Ole Miss offensive coordinator.

RANKINGS Neither team is ranked

Rodriguez, a former head coach at West Virginia, Michigan and Arizona, is known as one of college football's top offensive minds.

The Rebels had 42 yards in the first half, including minus-1 rushing on 13 attempts -- counting quarterback Matt Corral being sacked twice -- and were 0 of 6 on third-down conversions to trail 13-0 at halftime.

In the second half, Ole Miss gained 131 yards.

"I think our guys settled down a little bit in the second half and got a little bit accustomed to what they were seeing and doing up front," Rodriguez said. "We had the huge mistake there on the last possession in the fourth quarter giving up the safety."

"It was just a missed block," Corral told reporters after the game. "We had a guy get confused out there. He didn't pick it up, and I didn't have time to throw it away."

Ole Miss never got the ball back as Memphis ran out the last 6:21 on the clock.

"Our guys are going to hang in there," Rodriguez said. "They're going to get better.

"We have a lot of inexperience that's going to get experience every time we play. I've got to do a better job getting them some opportunities that they can execute well."

Corral, a redshirt freshman, was among six Ole Miss players on offense who made their first career starts at Memphis. Three other players had made a combined seven starts going into the Memphis game.

"This is probably the youngest we've been, the most inexperience, not only with the starters but with the backups as well," said Rodriguez, who is in his 32nd season as a college coach. "That's our job as coaches to understand that and get those guys ready to go.

"I was really pleased with fall camp, the way guys progressed and then game-week preparation, but we obviously didn't play well so I've got to make sure we do some things to help them have success on Saturday."

Corral, who played in four games off the bench last season to retain his redshirt status, has taken over as the starting quarterback with the departure of Jordan Ta'amu.

Against Memphis, Corral completed 9 of 19 passes for 93 yards and 1 interception. He was sacked three times.

"He made some really good decisions and some poor ones," Ole Miss Coach Matt Luke said Monday at his weekly news conference. "In your first start, that happens.

"There are some things we can do to help him with the O-line and receivers. We can't put it all on Matt. It's coaching, everybody working together and finding a way to get it done.

"We have to get the ball out quicker, and if we want to take a shot down field, hold up in protection for him."

Rodriguez said Corral wasn't able to get in a comfortable rhythm against Memphis.

"Matt can make all the throws," Rodriguez said. "He was really sharp leading up to it in camp, and in the game a few things happened."

"They did a good job of making some things look like one thing, and it was really another thing," Rodriguez said. "After our long film session [Sunday], he understood it. He'll get better. He's a sharp guy. Football's important to him.

"He's learning the offense. It was his first game in that offense. Every time we play a game where it's live and competitive, he'll grow from it. That's the part I'm excited about."

Senior running back Scottie Phillips led the Rebels with 19 carries for 62 yards, and he scored their only touchdown on a 1-yard run with 11:49 left in the fourth quarter that pulled Ole Miss within 13-10.

Elijah Moore, a sophomore making his fifth start, had four catches for 60 yards to lead the Rebels.

"Offensively, not what we expected," Luke said. "We have the right pieces in place. We have some young guys, and we're going to get them better. We'll coach them better.

"There were some mistakes made, but we can put them in a little bit better position, too."

Rodriguez will face an SEC defense for the first time since his final game at Michigan, when Mississippi State beat the Wolverines 52-14 in the Gator Bowl to cap the 2010 season. He's never gone against Arkansas defensive coordinator John Chavis.

"It's the same kind of preparation you do for anybody," Rodriguez said of SEC play. "Obviously, you're going to get some bigger, faster guys, particularly up front.

"I've got a really good coaching staff I'm working with, and a great group of young guys, so they'll get better."