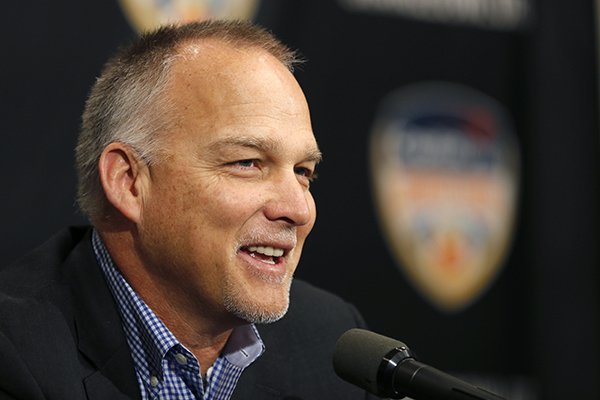 Mark Richt had a message for those in attendance at the Little Rock Touchdown Club luncheon Tuesday, some of whom are University of Arkansas fans who saw the Razorbacks hold on to defeat Portland State in the Razorbacks' season opener Saturday.

"There's a huge difference between the Arkansas game and the Tennessee game," Richt said of Arkansas' 20-13 victory over Portland State and Tennessee's 38-30 loss to Georgia State. "Arkansas won.

"In one month, is anybody going to think about that game? The bottom line is, they won the game. If you lose a game like that, it sticks in your craw for a long time."

"Game one, everybody's healthy and fired up," Richt said at the DoubleTree Hotel in Little Rock. "If you play a team like Portland State, by the end of the year, they may not have enough depth to play with you. But at the start of the year, they're excited.

He was one of the most respected coaches in college football for how he treated people and how he ran his programs at Georgia and Miami. Richt said he doesn't mind being called a better person than a coach by some college football fans and experts.

"God is going to be more concerned about how I treated those players than how many games I won," he said.

After retiring from coaching last year, Richt is now with the ACC Network, which began this season. Richt said he is enjoying his new career.

Richt is high on Clemson, which won the national championship last season and has played in the College Football Playoff the past four seasons.

"SEC teams look different," Richt said. "But Clemson blends in and looks better than most. Once you get it rolling, it's hard to slow down."

Before becoming a head coach in 2001, Richt was an assistant coach at Florida State under Bobby Bowden for 15 seasons. He said he understands the challenge of being a head coach and knows how different that position is compared to being an assistant.

"There's a lot of respect in that room," Richt said. "Until you sit in the seat of the head coach, it's a different world. Even when I was an assistant coach, I saw Coach Bowden make a lot of decisions. I'd think, 'Why did Coach Bowden do that?'

"Then you became a head coach, and I saw why coach did what he did."

• Richt on hearing that former Arkansas coach Bobby Petrino is speaking at the Touchdown Club on Monday: "Can I come back?"

• Rex Nelson on Arkansas' 20-13 victory over Portland State on Saturday: "A win is a win. We'll have some group therapy here [as he asks the audience to repeat him]: A win is a win. As Houston Nutt would say, 'All victories are precious.' "

• Richt on playing Arkansas during his coaching career. He was 6-1 against the Razorbacks at Georgia: "We had a lot of respect for Arkansas. It was never an easy day."