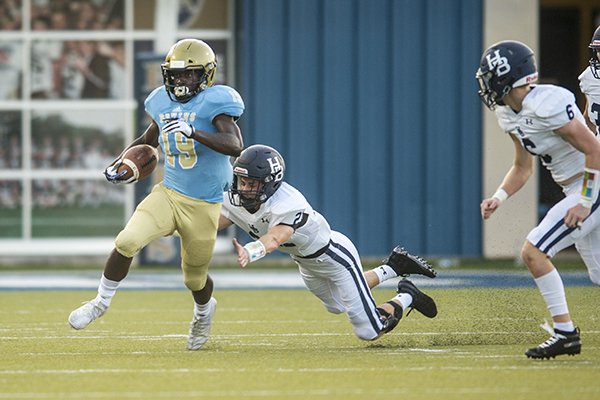 Pulaski Academy running back Joe Himson (19) breaks a tackle during a game against Springdale Har-Ber on Thursday, Aug. 29, 2019, at Joe B. Hatcher Stadium in Little Rock.

Pulaski Academy sophomore running back Joe Himon had a major college offer long before his first varsity game and it is likely other programs will follow.

Himon, 5-9, 180 pounds, started the season strong with 148 rushing and receiving yards. He took a screen pass 85 yards for a score in the Bruins' 84-68 victory over Springdale Har-Ber.

He missed the majority of his ninth grade season after suffering an injury in the first game.

“I knew the kid was talented, but his coaches were telling me, ‘Coach, this kid is the real deal’,” Pulaski Academy coach Kevin Kelley said. “I just don’t want to say a sophomore that hasn't played a senior high game is the real deal, especially since he missed his whole junior high season.”

After seeing him in practice and in the season-opening victory, Kelley believes Himon has a high upside.

“He has a chance to be really good,” Kelley said. “He already has an offer from SMU. They were here to watch somebody else in spring practice and watched him for a little bit and it was like, ‘Wow,' and they offered him right then.

“I think he’s going to be a big-time kid. He definitely has the chance to be the best running back to come out of here.”

Himon’s work ethic helps separate him from others.

“He’s continued to work really hard, he loves lifting weights,” Kelley said. “He loves going out and training. He’s turned his body into just an athletic, strong kid that’s fast and gifted with little moves here and there.”

Har-Ber defeated Tulsa Union in a scrimmage prior to playing the Bruins. Kelley believes the Wildcats will be one of the top teams in the 7A West this season, but said Himon showed he was at a different level than others on the field.

“Golly, he just looked like he was better than everybody else in a lot of ways on the field,” Kelley said. “He’s really good at hitting the hole and accelerating through the hole and running through arm tackles. Great vision, good cutbacks and he has great feet when that last guy is trying to get him and diving from afar he just moves his feet ever so slightly to get past that and he’s off and running.”

Himon is a team player who is willing to do whatever is needed of him.

“That’s one of the highlights I showed to the team: him blocking a guy 25 yards downfield,” said Kelley of the Har-Ber game.

Character won’t be an issue on the next level.