Aggies not lacking in confidence 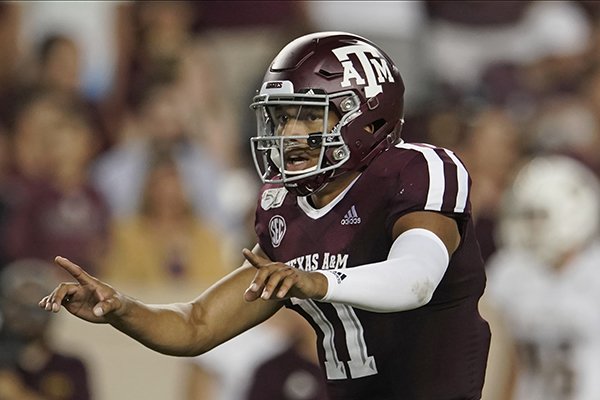 Texas A&M is 2-14 against No. 1 teams going into Saturday night's game at top-ranked Clemson.

Aggies junior guard Jared Hocker is confident No. 12 Texas A&M will be 3-14 after playing the Tigers.

"There will be an upset," Hocker told reporters in College Station this week, according to TexasAgs.com. "I'm pretty confident in my ability and my team's ability."

"I like being the underdog," Hocker said. "You always have something to prove. I'm looking forward to the opportunity."

"There's nothing wrong with being confident. If you're not confident, you're not going to be successful," Fisher said. "We understand the opponent. You have great respect for them, but also you have to go compete.

"Any time you line up to play, you expect to be successful. You understand it's a tall task.

"But what Jared said doesn't need to be said. That's great, but at the same time, you've got to play well. After the first two hits of the game, that stuff all goes away anyway."

Hocker's comments got the most attention, but his teammates also expressed confidence playing at Clemson.

"I have never thought about losing a game this season," junior wide receiver Jhamon Ausbon said. "I can honestly say this is the first time I've ever done that before."

"Those are great teams we're playing," Ausbon said. "Kudos for them. But we're not coming out with a loss in a game."

Jake Bentley, who has been South Carolina's starting quarterback since midway through the 2016 season, is expected to be sidelined for at least six weeks and could miss the rest of the season after suffering a foot injury in the opener against North Carolina.

If Bentley has to undergo surgery, he's done for the season.

Bentley is a senior, but hasn't redshirted, so he could be back next season.

"It's devastating," running back Rico Dowdle said of Bentley's injury. "I hate it for him."

Hilinski was a touted recruit.

"I'm excited about Ryan," Muschamp said. "He's got a lot of arm talent, a lot of ability. And I think he'll play extremely well. We got a lot of confidence in him and the job he'll do on Saturday."

Cutcliffe also coached Daniel Jones -- the New York Giants' first-round draft pick this year -- at Duke, so he knows a lot about quarterbacks.

What was Cutcliffe's assessment of Alabama quarterback Tua Tagovailoa after he completed 26 of 31 passes for 336 yards and 4 touchdowns without an interception in the Crimson Tide's 42-3 victory over the Blue Devils?

"He is incredible. He's accurate," Cutcliffe said. "He's poised. His release is so compact ... and quick. He can throw on the run.

"I had never studied him until this summer. I think he's going to be a great quarterback this year, and he will play in the National Football League a long time."

If Saturday night's LSU-Texas game needed any extra hype, it was provided by Tigers outside linebacker K'Lavon Chaisson.

The game will give Chaisson another chance to go against Longhorns quarterback Sam Ehlinger, his Texas high school rival.

"I'm glad that we get to go against [Ehlinger] again," Chaisson told reporters last Saturday night after LSU beat Georgia Southern 55-3. "I don't really find him too much as a threat. Not taking a shot at him, but he uses his legs more than his arms. So, just like in high school, he has a decent arm, but it's more about his legs."

Give Chaisson credit for not backing down from his comments when he met with the media again Tuesday.

"I mean what I say, and I say what I mean," Chaisson said.

Gus goes for it

Auburn trailed Oregon by a point with 16 seconds left and a first down at the Ducks' 26 during Saturday night's game at AT&T Stadium in Arlington, Texas.

The safe play would have been to set up for a field goal attempt, but Tigers Coach Gus Malzahn didn't play it safe.

Malzahn called a play with two receivers running go routes, and true freshman quarterback Patrick Nix connected with Seth Williams for a touchdown pass that lifted Auburn to a 27-21 victory.

"We had 16 seconds left, so we wanted to get a little bit closer, and we'd been trying to get Seth Williams one-on-one for I guess the last three drives," Malzahn said Wednesday on the SEC coaches teleconference. "The quarterback saw it, and he threw a ball that only Seth could catch it. The rest is history."

Count former Gamecocks wide receiver Tori Gurley among South Carolina alumni who are being critical of the program after a 24-20 season-opening loss to North Carolina.

The Gamecocks blew a 20-9 lead in the fourth quarter against a team coming off a 2-10 season and starting a true freshman quarterback.

Gurley tweeted a video after the game suggesting the Gamecocks don't deserve to be using their new $50 million complex.

"It's the truth," Gurley told The Athletic website this week. "If I lied, anyone is open to challenge me on it. You go out and give all these young men shiny bells and whistles and for the most part, these young men didn't work for it, and it can make you soft.

"That's sad to say, but that's how it goes. Hopefully, they can start worrying about winning football games instead of what jersey they are going to wear or some hype video on Instagram."

Gurley questioned why there is a recording studio in the football complex named for musician Darius Rucker, a South Carolina alum.

"Since when is having a Darius Rucker studio going to make you a better football player?" Gurley said. "If you want to go be in the band, go be in the band. You're there to win football games, and that's what we want to see. Pull back on the distractions so guys can worry about the task at hand."

Kelly Bryant completed 31 of 48 passes for 423 yards and 2 touchdowns at Wyoming in his first game as Missouri's starting quarterback.

The senior graduate transfer from Clemson also had two turnovers, including a lost fumble that was returned for a touchdown in the Cowboys' 37-31 victory over the Tigers.

"He accounted for a lot of yards and put our team in position to win the game," Missouri Coach Barry Odom said on the SEC coaches teleconference. "But he had two turnovers, and those were untimely."

It was Bryant's first game in nearly a year after he played in Clemson's first four games last season, then left the team in order to redshirt and transfer.

"He'll play better as the year goes on," Odom said. "That's the first time he's played a real game in quite some time. He's a great competitor and a wonderful teammate, and I'm sure glad he's our quarterback.

"He's a seasoned, veteran guy, but he's also got a lot of room to grow, and he's going to end up having a really good year."

Alabama is ranked No. 2 in The Associated Press poll this week behind Clemson.

It's the record 56th consecutive week for the Crimson Tide to be ranked in the top five during a streak that started Nov. 8, 2015.

Alabama broke a record it had shared with Miami, which was ranked in the top five for 55 consecutive weeks from 2000-2003.

Before Georgia State upset Tennessee 38-30 on Saturday, a 45-foot cabin cruiser -- part of the Volunteer Navy that travels to games by boat via the Tennessee River -- that was docked near Neyland Stadium caught fire and eventually sank.

No one was injured in the fire, but it seemed to be an early sign that things weren't going to go well for the Vols and their fans.

• Mississippi State junior quarterback Keytaon Thompson is staying with the team after entering the transfer portal when he was beaten out by Tommy Stevens -- a senior graduate transfer from Penn State -- for the starting job. Thompson didn't travel with the Bulldogs for their opener against Louisiana-Lafayette in New Orleans, but Coach Joe Moorhead confirmed this week he's back with the team.

• Missouri receiver Barrett Banister, a redshirt sophomore from Fayetteville, had three receptions for 32 yards against Wyoming.

• Prior to Georgia State's victory at Tennessee, the Vols hadn't lost to a non-Power 5 conference opponent since 2008 when Wyoming beat them 13-7.

Burrow, a senior, will lead LSU’s expanded offense against Texas. He completed 23 of 27 passes for 278 yards and tied a school record with 5 touchdowns in the Tigers’ 55-3 victory over Georgia Southern. All five of his touchdown passes came in the first half as Burrow became the first LSU player to throw for that many scores in a half. Burrow, a graduate transfer from Ohio State who is in his second season as LSU’s starter, will go against Texas Coach Tom Herman, who as a Buckeyes assistant recruited him five years ago to play for OSU.

Is Texas really back after the Longhorns beat Georgia 28-21 in the Sugar Bowl? LSU (1-0) hopes to prove Texas (1-0) isn’t all the way back — at least against SEC teams — when the Tigers take on the Longhorns in a matchup of top 10 teams. Whoever wins will have a major nonconference victory on its resume come playoff time. LSU is a 6 1/2-point favorite.

Murray State at No. 3 Georgia