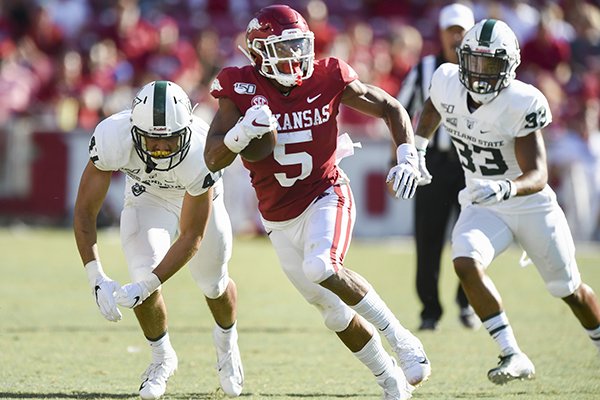 Arkansas running back Rakeem Boyd (5) runs during a game against Portland State on Saturday, Aug. 31, 2019, in Fayetteville.

FAYETTEVILLE -- Rakeem Boyd was on pace to rush for 400 yards against Ole Miss last season.

The tailback piled up 106 yards on 6 carries in the first quarter, including a 69-yard touchdown run as the Razorbacks raced to a 17-3 lead.

But Boyd's first carry of the second quarter was his last.

He was slammed into the hard turf at War Memorial Stadium in Little Rock by Zedrick Woods after a 3-yard gain and bruised his tailbone. Boyd was down on the turf for a bit before hobbling to the sideline, finished for the night.

Ole Miss rallied to win the game with a late fourth-quarter drive for a 37-33 victory, snapping Arkansas' four-game winning streak in the series.

Boyd would like to spin a different story with his play Saturday, when the Razorbacks (1-0) face Ole Miss (0-1) in the conference opener for both teams at 6:30 p.m. in Oxford, Miss.

"I mean, really this game is for redemption," Boyd said. "Last year, we were up on them and I got hurt, we got down, and stuff like that. This year, we just have to finish. I've got to stay healthy."

Boyd, a native of Stratford, Texas, got a late start with the Hogs last summer after his transfer from Independence (Kan.) Community College. He got into the flow with 66 and 47 rushing yards against Auburn and Texas A&M in Games 4 and 5, then Boyd was on a roll after amassing 102 rushing yards and 126 yards from scrimmage against the typically stingy Alabama defense Oct. 6.

Boyd was chewing up ground early the next week against the Rebels, with a 38-yard catch and run, followed by carries of 4, 6, 6 and 19 yards before his breakaway 69-yarder up the middle with 31 seconds remaining to cap Arkansas' most explosive first quarter of the season.

"I saw it first-hand last year, him being able to run through people and also make them miss," Ole Miss Coach Matt Luke said. "He's just got a knack. He's a very, very good player. He's hard to get on the ground. He's one of the top backs that we saw last year."

Arkansas defensive personnel have more of an up-close look at Boyd, who signed with Texas A&M out of high school, than any other defensive unit.

Arkansas defensive coordinator John Chavis was at Texas A&M for Boyd's redshirt year there in 2016, so he's seen the 6-0, 213-pound junior in practices for parts of three years.

"I think he's got really good speed, he's got fluid hips, and he can change direction," Chavis said. "He can stick his foot in the ground and get vertical, and he runs physical, a lot more physical than you think."

Boyd not only had the tailbone issue late last season, but he also played through a shoulder injury that required labrum and rotator cuff surgery during the winter.

Now, in good health and in sync with the playbook, Boyd has stamped himself as one of the best tailbacks in the SEC.

He's off to a good start, with his 114 rushing yards ranking third in the SEC behind Mississippi State's Kylin Hill (27 carries for 197 yards) and Georgia's D'Andre Swift (16-149).

"I mean, he's a special talent, and we kind of expect that from him," quarterback Ben Hicks said. "We expect him to play well every week."

Boyd averaged 6.3 yards per carry on his 18 carries against Portland State. He scored on a 2-yard run in the third quarter, but receiver Trey Knox said he could have scored on the play before that, another 2-yard run.

"I low-key screwed him," Knox said. "I missed a block, and he got tackled ... and I was so mad because like, 'Bruh, there's no point why we're on the [two] when he should be standing in the end zone right now.'

"All in all, he did great. He was making people miss, making two, three people miss on bubble screens and everything. So he brought the juice, he brought that wood, so I think we're going to be good."

Boyd's 114 rushing yards marked his career high as a Razorback.

"Rakeem is stronger and more physical than he's been," Coach Chad Morris said. "I thought as the game went on he got more comfortable in seeing it. ... I just think the more reps, the more opportunities he gets, as you saw, the better he's going to get. I know he wishes that this game a year ago, when he didn't get to finish it."