DE depth getting an early test 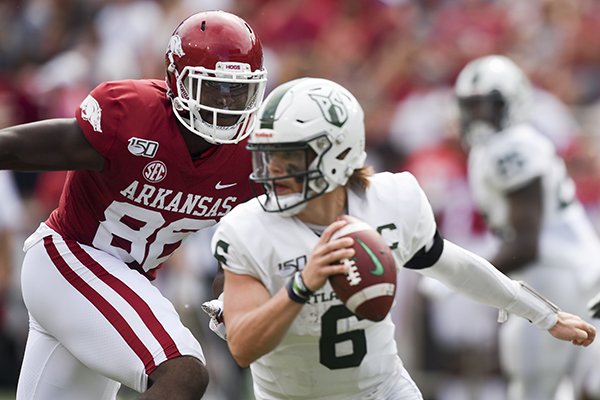 FAYETTEVILLE -- University of Arkansas defensive players are not outwardly concerned about the Razorbacks' sudden spate of injuries at defensive end.

Senior end Dorian Gerald was lost for the year with an artery issue in his neck in Saturday's 20-13 victory over Portland State, and two other key players were injured. Senior Jamario Bell is questionable for Saturday with a knee problem, and freshman Mataio Soli, who is now likely to pair in the starting lineup with Gabe Richardson, will wear a heavy wrap on his right hand after breaking a bone in it Saturday.

"I'm not concerned at all," linebacker Grant Morgan said. "Soli is doing really well. The next guys, they've all done really good. Gabe has held down that left side, and when you have a really good interior like Sosa [McTelvin Agim] and TJ [Smith], it's hard to just focus on the D-ends because you got to mess with those guys too."

Freshman nickel back Greg Brooks Jr. has faith in the young ends who signed in his class.

In addition to Soli, Zach Williams and Eric Gregory signed in January and went through spring drills, while Collin Clay arrived in the summer. Gregory has returned near to full speed after undergoing surgery in camp to repair a high ankle sprain.

"We've talked even back in the spring about building depth and that's obviously a part of it. You don't like to lose anybody, but we've got to get the next guys up ready to go."

The Razorbacks are expected to add a premier weapon for their SEC opener, as tight end Cheyenne "C.J." O'Grady should be ready after sitting out last week.

"I think we saw what C.J. is capable of doing a year ago," Coach Chad Morris said Wednesday. "He's very much a playmaker. He's 255 pounds, runs extremely well, very athletic. A guy that can block and be a threat in the passing game.

"He creates mismatches. We're excited to have C.J. back and ready to go. He had a really good practice [Tuesday] and I anticipate that today."

O'Grady is the Razorbacks' top returning pass catcher with 30 receptions for 400 yards and 6 touchdowns.

Arkansas safety Kamren Curl said he was fortunate the targeting call thrown against him on a sideline hit on Portland State quarterback Davis Alexander was overturned in the second quarter last Saturday.

"I was probably being a little too aggressive," Curl said. "I saw him diving for the first down and I didn't want him to get it. But I just have to be more careful.

"Coach Morris talked to me about being more careful because you don't want something that close and they miss it and then kick me out."

Arkansas Coach Chad Morris will face Ole Miss on the road for the first time on Saturday, but it won't be his first visit to Oxford, Miss., for a game.

Morris went to Ole Miss a couple times for games when Jevan Snead, his quarterback at Stephenville (Texas) High School, played for the Rebels and Coach Houston Nutt during the 2008 and 2009 seasons.

The forecast calls for temperatures in the mid-90s on Saturday when Arkansas plays at Ole Miss, about 10 degrees warmer than the temperaure for the Razorbacks' opener last week.

"Well, we always try to have a plan early in the year, a good rotation plan for humid days or heat or altitude or whatever it may be," Coach Chad Morris said. "That's kind of customary, probably pretty much across the country with coaches. We want to get some guys in, rotate and get them some experience early on."

Chavis is in his 25th season as an SEC coordinator.

"He's been doing it a long time," Luke said. "There's not going to be anything that he hasn't seen. We've faced him several times. There's a lot of familiarity, but a lot of respect for him as a person and a coach."

Memphis beat the Rebels 15-10, but two of those points came on a safety.

"There were a couple of times that we might have gotten lined up late. A couple of those were my fault. A couple of them were our guys' fault, kind of seeing different things, but overall we were in the right area.

"Now we've got to be a little bit better in our technique when we get to that area. Those are the type things you hope improve from game to game."

"He's a big rascal in there," Arkansas offensive coordinator Joe Craddock said. "He's hard to move, he's quick. He has good moves inside. We're going to have to do a good job of collecting him in movement with the different stuff that they do."

Arkansas leads the series with Ole Miss by a count of 36-26-1 according to its records, while Ole Miss claims the Razorbacks have a 35-27-1 edge.

At issue is the 1914 game, which the Razorbacks claim as a forfeited victory due to an ineligible player, though the Rebels won the game 13-7 in Little Rock.

The series is tied 6-6 in Oxford, Miss., with Arkansas winning six of the last nine games at Vaught-Hemingway Stadium. The Rebels have won two of the last nine at home and vacated a 34-24 win in 2013 due to NCAA violations.

"I think the offense wasn't up to our standard, but a lot of that was keeping it vanilla playing somebody like Portland State," tight end Grayson Gunter said. "Obviously, coming out this week, this is a big game. We want to pull out all the stops and really leave it all out there as an offense."

Both of safety Kamren Curl's sacks in the season opener came on instinctive moves, not called blitzes, he said.

"My assignment blocked and the quarterback rolled so I went and attacked," Curl said. "I hope I can blitz some this season, but that was really just a play I made."

Mike MacIntyre, in his first season as Ole Miss defensive coordinator, has faced Arkansas before.

MacIntyre was an assistant coach for the Rebels from 1999-2002 when he coached receivers and then defensive backs. His tenure included the 2001 Arkansas-Ole Miss game, won 58-56 by the Razorbacks in an NCAA-record seven overtimes.

Senior Scottie Phillips led the Rebels with 19 carries for 62 yards against Memphis last week. The 5-8, 211-pounder rushed for 928 yards last season, including 86 against the Razorbacks on 18 carries.

"He's a good little back," Arkansas linebacker Grant Morgan said. "I think he's gotten more physical this year. Just in that first game, he ran a couple of those safeties over.