Eason down to 2, receptive to French recruiting him 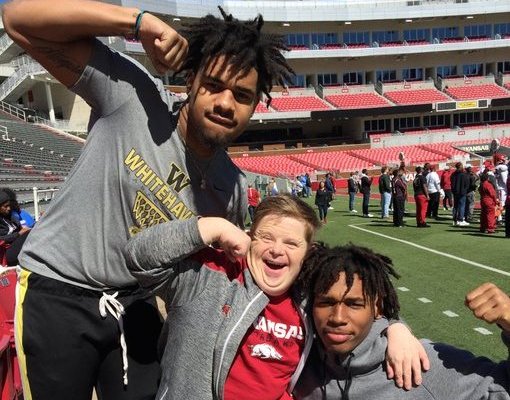 Arkansas linebacker commitment Martavius French has been in the ear of teammate Bryson Eason about being a Razorback.

Eason, 6-2, 248 pounds, of Memphis Whitehaven, said after the Tigers' 23-0 victory over North Little Rock said his recruitment was down to Arkansas and Tennessee. French being committed to the Razorbacks is a key.

"One thing is my brother is committed there," Eason said. "That's a big thing and you know it's just like a family there. SJ (Sean Tuohy) is from Memphis. He's a Memphian, so he keeps it real with us and lets us know it's a brotherhood there and it's a family there, inside football and outside football."

French is urging him to continue his playing days in Fayetteville.

He explained why the Volunteers are one of his finalists.

"Just like Arkansas, I have a chance to play early and they're looking for me to come in and be a big leader and take a big step and grow up as a freshman," Eason said.

ESPN rates Eason a three-star prospect, the No. 12 inside linebacker in the nation and the No. 14 prospect in Tennessee. He recorded 111 tackles, 8 tackles for loss, one sack, one interception and a recovered fumble as a sophomore.

His relationship with Arkansas defensive coordinator John Chavis is strong.

"Great dude. He hits me up every day, texts me today and tells me to have a great game," Eason said. "You know, ball out. Everybody on the staff, we always communicate."

Eason said he and French plan to officially visit Arkansas for the Auburn game Oct. 19.

French, 6-2, 236 pounds, 4.7 seconds in the 40-yard dash, of Memphis Whitehaven, picked the Razorbacks over scholarship offers from Tennessee, Ole Miss, Mississippi State, LSU, Oklahoma, Florida and others in July.

He has a good vibe about Eason and Arkansas.

"Arkansas is where home is at," French said. "I'm trying to keep it 100 with him. I tell him as long as we keep doing our job, we're going to be the best in the country. I'm telling you now, when you see me at Arkansas, I'm doing the same thing. We've been doing this."

He had 135 tackles, 15 tackles for loss, two sacks, two interceptions, four forced fumbles and two recovered fumbles as a junior for the Tigers, which finished state runner-up in Class 6A. He and Eason have been named to preseason high school Butkus Award watch list.

French's excitement for Arkansas is obvious.

"I just love it," French said. "It's aways been love since they started recruiting me and the love still hasn't changed, and I'm not going to change my love for them either."

"When we put a big zero on the board, coach brings us a box of donuts and we love those donuts," he said.

French recorded 53 tackles, 4 tackles for loss, one sack, one forced fumble and a fumble recovery as a sophomore. ESPN rates him a three-star prospect, the No. 36 outside linebacker in the nation and the No. 11 recruit in Tennessee.