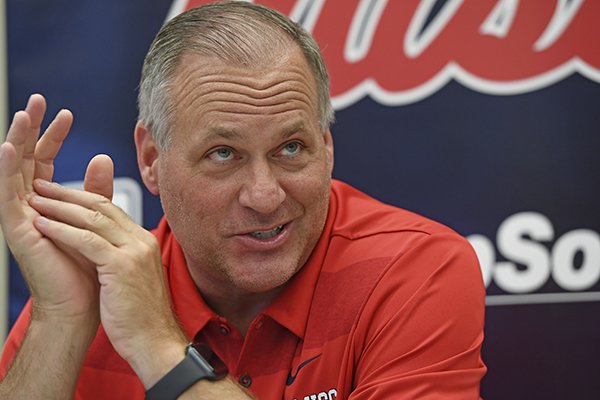 FAYETTEVILLE -- The Arkansas Razorbacks can relate to what the Ole Miss offense is going through right now.

Not only have the Rebels changed offensive coordinators and tweaked their over-arching philosophy with Rich Rodriguez taking the reins for Coach Matt Luke, they've largely swapped out personnel, including redshirt freshman quarterback Matt Corral.

Arkansas struggled in the transition to the Chad Morris offense in 2018, and the Rebels are off to a rough start this year with Corral surrounded by new starters at most positions outside of tailback Scottie Phillips and tight end Octavious Cooley.

Where quarterback Jordan Ta'amu tore up secondaries with his arm and legs last year, such as with his 528 total yards in a 37-33 victory over Arkansas in Little Rock, Corral is taking infant steps in the new system. The 6-1, 206-pounder from Ventura, Calif., had 110 total yards -- 93 passing and 17 rushing -- in the Rebels' 15-10 loss at Memphis

"We really weren't able to get him in a rhythm, comfortable, and any quarterback is like that," Rodriguez said on Monday. "Matt can make all the throws. He was really sharp leading up to it in camp, and in the game a few things happened. ... He's played a little bit, but that was his first start, and I think Matt will continue to get better."

"They want to run the football," Chavis said. "That's what they like doing, and to be a good football team I think that's something you have to do. They want to get that done and certainly use the quarterback in running the football. ... We expect to see a wide-open offense."

Ole Miss was not wide open last week, mustering 80 rushing yards, 13 first downs and 1 of 10 third-down conversions against the Tigers at the Liberty Bowl. That prevented the Rebels from operating at their desired tempo.

"You're going to see tempo with them," Arkansas linebacker Grant Morgan said. "They go fast as can be. They'll probably be one of the fastest teams we see all year."

Said Arkansas safety Kamren Curl, "They spread out, run the ball and take shots, zone read, stuff like that."

Morris thinks the Rebels, who had trouble beating man coverage on the outside, will make a significant leap this week.

"We're going to see an improved Ole Miss team," Morris said. "We know that. They've got two fantastic coordinators that have been in this situation before. They've both been head coaches, and they understand what it takes to get from week one to week two and get better, just like our staff does."

Ole Miss allowed three sacks against Memphis, including a critical one for a safety with 6:27 remaining to set the final score. The Rebels never got the ball back.

Memphis pushed back the line of scrimmage with frequency while going against three new starters on the Ole Miss offensive line. Additionally, veteran right tackle Alex Givens was not at 100 percent in his recovery from a back issue that kept him out of camp.

Luke expects that unit to take on plenty of extra pass rushers against the Razorbacks.

"We struggled against pressure last week, so I expect to see that," Luke said. "We're going against Coach Chavis, and I worked with Coach Chavis [at Tennessee]. He's a great football coach and I think he'll do a good job of mixing it up.

"He's an experienced guy, and I do expect to see some pressure. We've got a young quarterback and some young players so I expect him to try and exploit that."

Morris was coy on the blitz plan.

"Each game you look at the personnel and decide what's the best way you want to attack it," he said. "I think that varies game to game. But I know that we're going to get a very much improved offensive football team from what we saw on video last week against Memphis."

Sophomore safety Joe Foucha is confident the Razorbacks can corral Corral and company.

"We've got the right scheme in place for what they do with the spread," Foucha said.

Ole Miss was shut out in the first half against Memphis, and it's not hard to find a key culprit. The Rebels were ambushed on first downs. Ole Miss gained 9 yards on its 11 first-down plays in the opening half. The Rebels had lost-yardage plays of -2, -1 and -6 to open its first three series, all of which went three and out.

Their only completed pass was Corral's 15-yard strike to tight end Jason Pellerin, their only first-down snap that moved the chains in the half. Ole Miss had eight run plays on first down in the first half and totaled -6 yards. Corral was 1 of 3 passing on first downs in the half.

"They did a good job taking the run away," Chavis said of Memphis. "Then you see Ole Miss come out in the second half and change their game plan a little bit and they got after them in the second half. ... The coaches did a great job and the players responded to it."

The Rebels indeed changed their fortunes in the second half with 83 total yards on 12 first-down plays, including a 36-yard pass completion and runs of 16 and 10 yards by Scottie Phillips to move the chains.

Ole Miss' last first-down snap was its worst, however, as Corral was sacked in the end zone on a delayed blitz by Bryce Huff with 6:27 remaining.