Fun at the bottom: Razorbacks, Rebels ready to put on show despite SEC woes 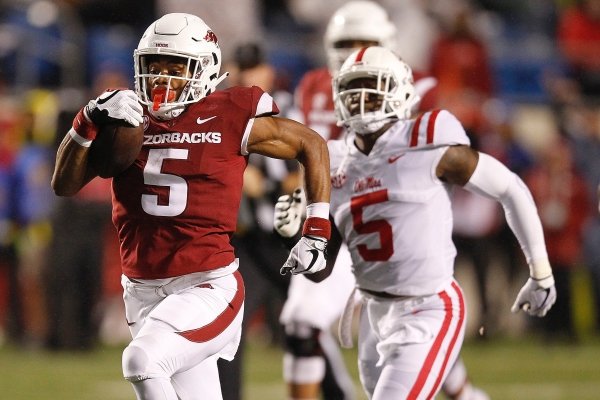 Arkansas running back Rakeem Boyd (left) races to the end zone for a 69-yard touchdown during the first quarter on Saturday, Oct. 13, 2018, at War Memorial Stadium in Little Rock.

OXFORD, Miss. -- Shenanigans should be in order for tonight's SEC opener at Vaught-Hemingway Stadium.

Sure, many across the SEC bill the Arkansas at Ole Miss game at 6:30 p.m. as an SEC West cellar-dweller affair between teams picked to finish at the bottom of the division.

Those inside the rivalry know to expect fireworks.

But the drama between these teams in Oxford goes well beyond that, back to the first seven-overtime game in Division I history in 2001, and further back to their first meeting here in 1928.

"It's been a real fun series," Arkansas junior safety Kamren Curl said. "It's the type of series you've got to stay locked in the whole game because crazy plays are going to happen between us."

Ole Miss Coach Matt Luke has been around for a lot of the craziness between the schools as a player, assistant coach and head coach.

"I don't think you really ever know what to expect in this game," Luke said. "It's been pretty crazy."

The Razorbacks (1-0), under second-year Coach Chad Morris, are looking to snap an 11-game SEC losing streak, their second skid with double-digit losses in SEC play in the past five years. Their last SEC and Power 5 victory? Right here in Oxford on Oct. 28, 2017.

Ole Miss (0-1) is aiming to right the ship after suffering a 15-10 loss at Memphis last week as Luke continues a Rebel rebuild in his third season as head coach after NCAA sanctions uncovered during Hugh Freeze's tenure.

Tonight's winner will have a leg up in the bowl pecking order. The loser will be regarded as the favorite to finish in the cellar in the SEC West, as the Razorbacks did last year.

"To travel on the road, especially when you consider playing on the road in this league and how hard it is to win on the road, this is a big ballgame for both teams," Morris said.

"Obviously it's a new year, so you don't want to look at last year," Luke said when asked about his team knocking Arkansas into last place a year ago. "It's a new season, and both of us are totally different than we were last year. So it's very important because it's the next game. This is the SEC opener, so it's very important."

The Razorbacks, a 6.5-point underdog, could springboard into a hot start with an upset. They have nonconference home games against Colorado State and San Jose State coming up before they resume conference play against Texas A&M.

"The second week when you go to Ole Miss, that's the Super Bowl," CBS analyst Houston Nutt, the former Arkansas coach, said this summer. "I mean, when you to Oxford, you've got to win. And if you do that, you're going to be 4-0 if you take care of business."

Ole Miss defensive coordinator Mike MacIntyre has previous experience in the series as an assistant with the Rebels from 1999-2002. He was asked Monday why the series has been so tight.

"I guess it's just the way it's put in the cards," MacIntyre said. "They have always been good football games, exciting games. It won't be any different this time."

Drama has marked most of the recent meetings. The past four games all have been decided by four points or less.

Arkansas holds a 6-6 record in games played in Oxford, though the Rebels were forced to vacate their 2013 victory.

Arkansas has had it struggles against SEC West competition in recent years, but not against Ole Miss. The Razorbacks had a four-game winning streak in the series snapped last year in a wet and wild shootout at War Memorial Stadium in Little Rock. In that game, UA skill players Rakeem Boyd, Devwah Whaley and Ty Storey were sidelined by injuries while building a 27-10 lead.

The Razorbacks had their own remarkable road comeback in the 2017 game, which was touched off by Santos Ramirez's forced fumble in Arkansas territory against tight end Octavious Cooley, who is still on the team, with the Rebels ahead 31-7 in the second quarter.

The Razorbacks cashed that takeaway into a Cole Kelley touchdown run, then scored again on Kelley's 23-yard pass to Deon Stewart just before halftime.

Just as significant was Richardson's 22-yard touchdown return of a fumble, when Ole Miss QB Jordan Ta'amu and tailback Jordan Wilkins bungled their handoff in the Rebels' backfield. That score pulled Arkansas to within 37-35 with 6:01 remaining.

"That was crazy," said Curl, who was a freshman that season. "That was God, really, because that ball was right there for him, and I was so happy when he picked it up."

The comeback was complete when Limpert drilled a 34-yard field goal with four seconds remaining for a 38-37 Arkansas victory. Limpert made the kick three consecutive times, though the plays had been blown dead as Luke called all three Ole Miss timeouts in an effort to disrupt him.

The Razorbacks have not won on the road nor beaten a Power 5 opponent since that game.

One of the most famous plays in Arkansas history came in Oxford in 2015. Facing a fourth and 25 from the Ole Miss 40 in overtime, tight end Hunter Henry caught a short pass on the Rebels' sideline, then unleashed a sidearm heave toward his backfield.

In that frozen moment, Freeze and others on the Ole Miss sideline were raising their arms in apparent victory. However, Alex Collins scooped up the long lateral on one bounce, motored around left end behind blockers, and converted the first down. Two plays later, Brandon Allen found Drew Morgan for a 9-yard touchdown pass, Morgan's third and Allen's sixth of the game.

With Arkansas now trailing 52-51, Allen was stopped on a two-point conversion pass as Coach Bret Bielema went for the win, but Marquis Haynes grabbed him by the facemask on the would-be sack. Allen ran in the two-point conversion as the Razorbacks stunned the No. 18 Rebels.

That victory started the streak of four games decided by four points or less.

"Coach Morris said today in the team meeting that, I believe it was the last four times we've met with Ole Miss, it's been decided by 10 points, combined," Arkansas tight end Grayson Gunter said. "That speaks a lot to the series, these two teams. It's a good game every single time, and we just want to be as prepared as we can and bring it."

Both teams played snoozers last week against lower-level opponents and rank near the bottom in FBS offensive stats.

Ole Miss was shut out in the first half with freshman Matt Corral directing the offense, and went 1 of 10 on third-down conversions at the Liberty Bowl against Memphis.

Arkansas, a four-touchdown favorite against FCS Portland State, struggled in Vikings' territory in a 20-13 win.

While neither offense lit it up in Week 1, coaches on both sides expect different outcomes tonight.

"They had a couple of plays that they just missed in the Portland game, or they would have had another 21 points or so," MacIntyre said. "I think they feel they have the ability to stretch the field a little bit more."

"They will have those guys improved and ready to go, as we will," he said.