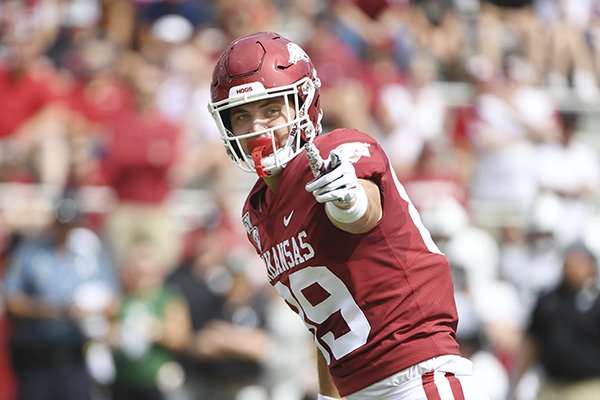 OXFORD, Miss. -- Grayson Gunter has been to plenty of football games in Vaught-Hemingway Stadium, but tonight's visit is different.

Instead of sitting in section O with his parents -- Ole Miss graduates Bubba and Donna Gunter -- and cheering for the home team, Gunter will be playing tight end for the University of Arkansas and trying to beat the Rebels.

NOTEWORTHY Had a career-high 3 catches last week for 16 yards in 47 snaps against Portland State. … Has played in 25 games, including 3 starts, and has 8 catches for 96 yards and 1 touchdown. … Redshirted in 2017 to add weight and strength while recovering from a shoulder injury. … Father, Bubba Gunter, played outside linebacker at Ole Miss. … Three-star high school recruit.

"I'd been going to Ole Miss games for as long as I can remember," Gunter said. "We had season tickets since my dad stopped playing there."

Bubba Gunter lettered at Ole Miss in 1988-89 as an outside linebacker, but he won't have any mixed feelings about tonight's game.

"He made it very clear in the recruiting process that wherever I went, that was going to be his school," Gunter said. "Even though I'm in the SEC and playing Ole Miss every year, it's never really been about Ole Miss or Arkansas for him. It's been about wanting me to play good and wanting us to win."

Gunter, a redshirt junior from Madison, Miss., said he got a scholarship offer from Hugh Freeze -- the Ole Miss coach at the time who is now at Liberty -- late in the recruiting process in 2015 after he already had committed to Arkansas.

"Sure, I listened to what Coach Freeze had to say," Gunter said. "But at the end of the day, I was solid with the staff here at Arkansas."

Gunter started in place of injured senior Cheyenne O'Grady against Portland State in last week's season opener and played a career-high 47 snaps. He also had a career-high three catches for 16 yards.

"It was cool to get my feet wet in my first college game really playing an extended amount of snaps," said Gunter, who last season had 4 catches for 51 yards in 11 games. "Just getting used to the physicality and going play after play, it was good to do that."

O'Grady has recovered from a knee injury and is expected to play tonight, but Gunter figures to get significant snaps.

"He's doing some really good things for us," Arkansas offensive coordinator Joe Craddock said. "He'll be excited to play back in his home state and continue to get better."

"He's good at getting open and has great hands," Hicks said. "So he's a real receiving threat. We've got to keep finding ways to get him the ball."

Tight ends coach Barry Lunney Jr. said Gunter is a tough matchup with his combination of size and speed.

"Grayson can really, really run for someone 6-6 and 245 pounds," Lunney said. "His foot speed is way above average for the position.

"That's obviously his strength, but what he's doing differently and better than what he's done in the past is playing with more grit and more confidence in the run game. Everybody has noticed it, so he's making a real clear-cut attempt to be more physical."

Gunter said he wants to be an all-around tight end, especially with the losses of Austin Cantrell and Jeremy Patton from last season.

"Austin and Jeremy really carried the bulk of the run game stuff," Gunter said. "I was in there a lot in passing situations. But with those guys gone this year, I've taken it on my shoulders to be more physical and get in the box and mix it up."

"He'll obviously have some extra motivation being from Mississippi, but he's a tremendous player and tremendous young man."

Gunter sat out Arkansas' 38-37 victory at Ole Miss in 2017 when he was redshirting, so tonight will be the first time he's played in Vaught-Hemingway Stadium.

"I remember being a kid always dreaming of playing in the SEC," Gunter said. "To walk into the stadium where I used to dream about that, I think it'll be very cool."

Gunter requested the 2017 redshirt after playing in all 13 games, primarily on special teams, as a freshman in 2016. His lone catch that season was for a 29-yard gain at Mississippi State.

"It was definitely humbling," Gunter said of redshirting. "But I brought it to the coaches, and they agreed with it.

Gunter was asked in training camp if the Ole Miss game has special meaning to him.

"Absolutely," he said. "Growing up a Mississippi kid and having family ties to Ole Miss, I'll definitely play with an edge that game."