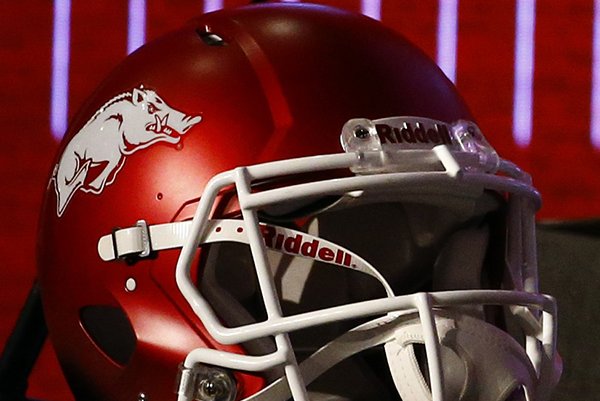 An Arkansas football helmet is shown during SEC Media Days on Wednesday, July 17, 2019, in Hoover, Ala. (AP Photo/Butch Dill)

It is well-known that Arkansas football coach Chad Morris and his staff have made recruiting Texas a priority as many successful Razorbacks coaches have done in the past.

But Morris and his staff have also spent a lot of time walking in Memphis since arriving in Fayetteville less than two years ago and that was not really something done successfully since the newest century arrived.

It's rather shocking that only 16 Memphis recruits have signed or committed to Arkansas in the past 19 years.

When you consider that eight of those have signed or committed since Morris and his staff arrived in December of 2017, it's clear that the Razorbacks are making the Bluff City a priority as well.

"We consider Memphis part of our recruiting footprint and it is a place where we think we can and will continue to have positive results," Morris said. "There are a lot of good players over there."

On the other hand, when Ole Miss takes the field against Arkansas today, the Rebels will do so without a single Memphis player on its roster.

Ole Miss, which wants to make Memphis a priority as well since it is just an hour away from Oxford, does have a 2020 commit in Memphis Briarcrest tailback Jabari Small.

Rebels head coach Matt Luke told The Commercial Appeal that Memphis has to be a priority for his program.

"Still one of the top factors in recruiting is distance," Luke said Monday. "And with Memphis being an hour away, I think it's really important. There will always be really good players in Memphis and it'll always be one of our top areas because of location."

Arkansas got its second pledge from a Memphis high school player in the 2020 class when Memphis Central athlete Darin Turner (6-foot-4, 215 pounds) committed to the Razorbacks last week.

"It comes from the fans," Turner told The Commercial Appeal. "People in the crowd. They say, 'Oh, he's a freak of nature. Oh, he reminds me of Calvin Johnson. How he catches, how he runs, just his game, reminds me of Megatron.' So I took that and ran with it. Baby Megatron."

Turner, a former LSU commit, chose Arkansas over Clemson, Alabama, Georgia, Miami and Oregon and follows in the footsteps of former Central stars Eric Gregory and Shamar Nash, who are Razorback freshmen.

ESPN has Turner ranked as a four-star prospect, the nation's 16th-best wide receiver and its 110th overall player in the 2020 class.

The Razorbacks also have a pledge from four-star linebacker Martavius French (6-3, 240) of Memphis Whitehaven in their 2020 recruiting class and are also recruiting another pair of four-star prospects in Whitehaven linebacker Bryson Eason (6-2, 250) and Briarcrest Christian defensive lineman Omari Thomas (6-5, 300).

Arkansas has a foot in Memphis thanks to assistant director of football operations and Memphis native Sean "SJ" Tuohy, portrayed in the movie The Blind Side, which chronicled the story of his adopted brother Michael Oher.

Tuohy, who played college basketball at Loyola-Maryland and then spent a graduate year as a holder for the SMU football team coached by Morris, has opened many doors in the city for Arkansas.

Arkansas' hiring of former Memphis Whitehaven standout and former Auburn director of player relations Kenny Ingram as its defensive line coach in February signaled even more the Razorbacks' plan to be a presence in recruiting Memphis.

After a college career at Arkansas State where he played on the defensive line for current Razorback assistant Steve Caldwell, Ingram was the head coach at Memphis Melrose from 2002-2004 while going 37-4 and coached 17 players during that time who went to play college football.

"Arkansas is doing all the right things now in Memphis to try and land some of the great players over here," Whitehaven coach Rodney Saulsberry said. "The hiring of Coach Ingram, one of our Whitehaven alums, showed they were serious about it."