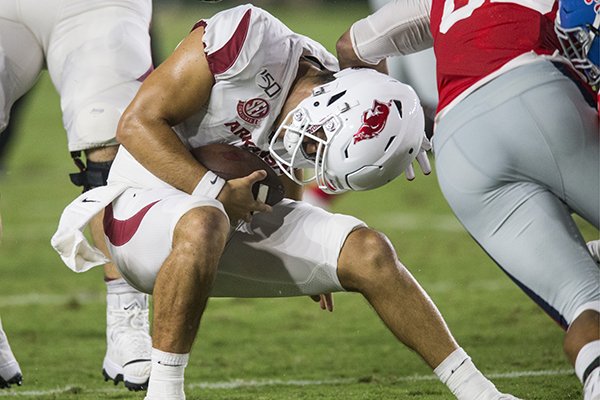 Arkansas quarterback Ben Hicks is sacked during a game against Ole Miss on Saturday, Sept. 7, 2019, in Oxford, Miss.

Down 10-3 at halftime, the University of Arkansas replaced starting quarterback Ben Hicks with backup Nick Starkel.

It didn't change the Razorbacks' fortunes in a 31-17 loss to Ole Miss on Saturday at Vaught-Hemingway Stadium in Oxford, Miss.

After Hicks completed 7 of 16 passes for 98 yards in the half, Starkel directed the Hogs for the entire second half. His first drive resulted in a three-and-out.

Ole Miss fumbled the ball away to the Hogs on a fourth-down run, and Starkel's next pass went for a 12-yard first down to receiver Mike Woods.

On third and 10, Starkel connected with receiver Trey Knox for an apparent game-tying 38-yard touchdown, but the Hogs were whistled for having an ineligible player downfield. Then on third and 15, Starkel hit tight end Cheyenne O'Grady for a 13-yard gain to the Ole Miss 30, but on fourth and 2 running back Rakeem Boyd was stopped for a 1-yard gain.

The Rebels (1-1, 1-0 SEC) broke the Hogs' defense on the ensuing drive. Ole Miss QB Matt Corral hit tight end Octavious Cooley for an 18-yard gain on third and 4, the only third down of the eight-play drive the Rebels had to convert. A 15-yard face mask penalty on UA defensive end Zach Williams moved the ball to the Arkansas 22, and Scottie Phillips ran for 21 yards on the next play. His 1-yard TD run put the Rebels up 17-3 with 2:34 left in the third quarter.

The Razorbacks (1-1, 0-1) moved to the Ole Miss 42 on their next drive, but Devwah Whaley fumbled the handoff from Starkel and the Rebels recovered.

Ole Miss got to the Arkansas 32, but Cooley had the ball ripped out of his hands, and Arkansas safety Kamren Curl scooped and scored from 69 yards out to pull the Hogs within 17-10 with 13:31 remaining.

The Hogs had two chances to force a punt on Ole Miss' next possession. On third and 2, the Rebels' pass was incomplete but Jarques McClellion was flagged for defensive pass interference, resulting in an automatic first down. Then on third and 5 from the Arkansas 46, Corral hit Elijah Moore on a slant, and he raced for the rest of the yardage on a 46-yard touchdown reception.

Ole Miss put the game away with a five-play, 66-yard drive that was capped by Phillips 26-yard touchdown run with 6:03 left.

Starkel finished 17-of-24 passing for 201 yards and 1 TD, on a connection with receiver Koilan Jackson with 1:21 remaining in the game to cut the deficit to 31-17. The Rebels accumulated 238 yards on the ground and 246 through the air. Phillips finished with 26 carries for 143 yards and 2 touchdowns on the ground for the Rebels.

After the teams exchanged three-and-outs to open the game, Ole Miss moved down the field on its second possession. Corral hit Dontario Drummond for 26 yards to the Arkansas' 35 on third and 7. On third and 2 from the Arkansas 12, Snoop Conner ran 3 yards for a first down.

On third and goal from the 2, Corral rolled right and found Moore for a 2-yard touchdown and 7-0 lead with 8:41 left to go in the first quarter.

Arkansas moved 33 yards on their next drive, with Boyd gaining 19 yards on 3 carries and 8 yards on 1 reception. But Hicks threw incomplete to Mike Woods on third down at the Ole Miss 48, forcing a punt.

The Rebels gashed the Hogs' run defense for 37 yards on three carries, but an offensive pass interference call erased a big gain and set up a first and 25. Ole Miss failed on a fourth-and-9 pass from the Arkansas' 38, setting up the Hogs with good field position with 2:08 left in the first quarter.

The Razorbacks secured one first down, but Hicks was sacked on first down to set up a second and 14 on the Hogs' 48 at the end of the first quarter. The Ole Miss defense stiffened, and Sam Loy's punt put Ole Miss at its own 14.

Despite a 23-yard connection between Corral and Conner, the Hogs' defense forced a punt on Gabe Richardson's third-down sack.

On second and 18, Hicks connected with Woods for a 30-yard gain to the Ole Miss 18. The drive stalled from there, and Connor Limpert made a 36-yard field goal to cut the deficit to 7-3 with 8:19 left in the half.

The Rebels failed to get anything going, but their punt pinned the Razorbacks at the 9. A Boyd run for no gain and two high, incomplete passes from Hicks forced an Arkansas punt, which left Ole Miss at the Hogs' 47 with 5:30 left in the quarter.

The Rebels picked up 15 yards on their first two plays, then Corral made a couple of Hogs miss tackles on a 23-yard run to the Arkansas 9. An offensive holding call gave the Rebels a second and goal from the 19, and the Razorbacks held them to a 33-yard field goal by Luke Logan with 2:24 left in the half.

Arkansas moved into field goal range on its last drive of the first half after Hicks avoided a swarm of defenders and found Trey Knox for a 49-yard gain to the Ole Miss 28. After three unsuccessful plays, Limpert missed a 43-yard field goal to set the halftime score at 10-3.

Ole Miss outgained Arkansas 236-137 in total yards in the first half. Boyd had nine carries for 29 yards.