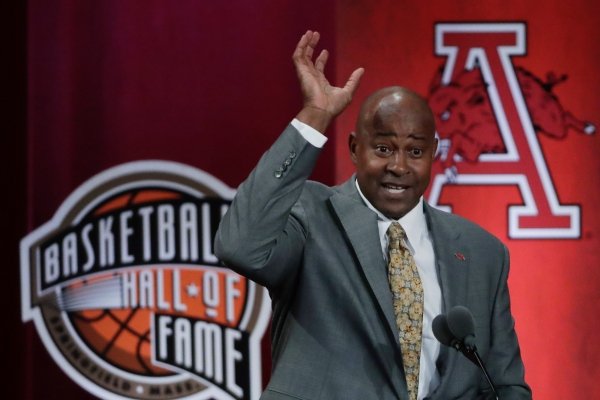 “If he’s so great, how did he pick Magic Johnson over me in 1979?” Moncrief joked during his Naismith Memorial Basketball Hall of Fame induction in Springfield, Mass. “I don’t know.”

Moncrief is the first former Arkansas player to be inducted into the Naismith Hall of Fame.

“It’s a wonderful game, and I’m just very blessed and fortunate to know that the game taught me how to prepare for opportunities, how to execute strategies, how to compete unconditionally and how to adjust when you experience setbacks.”

Moncrief scored 2,066 points in his Arkansas career, a school record at the time. He is one of four Razorbacks to score more than 600 points in two separate seasons.

Moncrief was a consensus first-team All-American and Southwest Conference player of the year as a senior in 1979 when he averaged 22 points and more than nine rebounds.

He was selected with the No. 5 pick in the 1979 NBA Draft, the only Razorbacks player ever picked that high. He spent more than a decade with the Milwaukee Bucks before finishing his career in Atlanta in the early 1990s.

Moncrief was named NBA Defensive Player of the Year in 1984 and 1985, and was a five-time all-star for Milwaukee.

Former Arkansas teammates Ron Brewer and Marvin Delph were in attendance for Moncrief’s induction. He saluted and thanked them for “making me a better player throughout my entire career. With Eddie Sutton, Gene Keady and Pat Foster, we did some tremendous things at Arkansas.

“Most of all, I want to thank the fans of the great state of Arkansas and Wisconsin in Milwaukee. It’s all about the game, and I’m just blessed to be a part of the great game of basketball.”