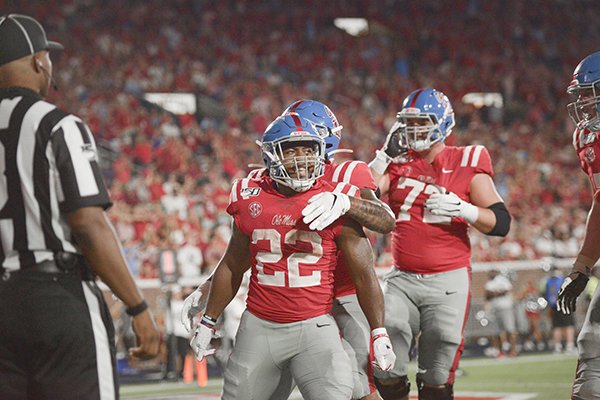 Ole Miss running back Scottie Phillips (22) celebrates after scoring a touchdown during the fourth quarter of a game against Arkansas on Saturday, Sept. 7, 2019, at Vaught-Hemingway Stadium in Oxford, Miss.

OXFORD, Miss. — Much like in its less-than-stellar win over Portland State in Week 1, Arkansas' offense appeared stuck in the mud and unable to take off Saturday night against Ole Miss in its SEC opener.

That was until Arkansas coach Chad Morris elected to sit starter Ben Hicks in the second half in favor of former Texas A&M quarterback Nick Starkel.

The Razorbacks' offense, though, still only found the end zone once in the 31-17 loss. Starkel, in the game's final moments, found receiver Koilan Jackson for the first touchdown of his career for the unit’s lone score. The Rebels had the game and conference win No. 1 well in hand at that point.

Plain and simple, Hicks did not impress for the second consecutive week since Morris named him the starting quarterback the Monday ahead of the opener with the Vikings. Hicks completed less than 50 percent of his 29 throws in Week 1 and did the same against Ole Miss - 7-of-16, 98 yards - before he was benched.

He did not throw a touchdown pass for the second game in a row after finishing with at least one in 10 straight games to end his SMU career.

Only one of Arkansas’ first-half drives covered more than 40 yards. Hicks was unable to sustain drives with third down completions, finishing 3-of-8 in that regard over his six series leading the offense. He was 1-of-5 when targeting freshman receiver Trey Knox in those situations, too. His other two such completions went to tight end Cheyenne O'Grady and running back Devwah Whaley for seven and nine yards, respectively.

Starkel, who was told by Morris he would take control of the offense as he ran out for warmups before the start of the second half, entered and looked to provide Arkansas' offense a spark. He completed nine of his first 11 passes, including first down throws to Mike Woods, Tyson Morris and O'Grady.

Starkel appeared confident and fell into a bit of a rhythm almost immediately, and the group began moving the ball with more consistency. He finished the game 17-of-24 passing for 201 yards and the score to Jackson. He would have had another touchdown pass to his name had the Razorbacks not been flagged for an ineligible player downfield.

The penalty wiped away a terrific 38-yard catch and run by Knox, who outran Ole Miss defenders and fought his way into the end zone only for it to be negated.

"It hurts," Starkel said of the play. "One second you’re celebrating in the end zone and the next second someone’s walking up to you saying, ‘Hey, there’s a flag. You have to go back.’ Just things like that, they put you in a hole. We talk about always wanting to stay in front of the chains because when you’re playing from behind the chains, your chances of scoring and getting first downs goes down detrimentally.

"We know that and we know how bad penalties can hurt us on offense and we have to correct that."

Despite pulling Hicks at the half and Starkel playing relatively well, Morris did not commit to naming either player the starter for next week against Colorado State.

Receiver Elijah Moore and running back Scottie Phillips were special. Moore turned in a career day with seven receptions for 130 yards and both of Corral's touchdown throws, one in the first quarter to give Ole Miss an early lead and one late to put the Razorbacks away.

Moore, who torched South Carolina for 11 catches and 129 yards late in 2018, was targeted a team-high eight times in the game. Corral exploited the 1-on-1 matchup between Moore and Razorbacks cornerback Jarques McClellion regularly.

Phillips ran a career-high 26 times for 143 yards and two touchdowns, putting the cherry on top of the win with a 26-yard score in the fourth quarter. Oddly enough, his 143 yards are his most in a game since facing the Gamecocks last season (141). He ran for three touchdowns that day.

"I mean, they did good," Arkansas linebacker Bumper Pool said of Moore and Phillips. "They have good players and they made plays tonight that they didn't make last week. We've got to focus on us and make sure we fix those mistakes."

Razorbacks safety Kamren Curl, who stripped tight end Octavious Cooley early in the fourth quarter and returned the fumble 69 yards for a touchdown, said the Rebels executed their offense well.

Tackling not up to par

Arkansas' night can best be summarized by one moment during Ole Miss' final touchdown, courtesy of Phillips.

More than 20 yards downfield, Phillips was met by Arkansas defensive backs Curl and Joe Foucha. The Razorbacks' last lines of defense, though, did not pose much of a challenge for the senior running back, who dragged the safeties roughly five yards and into the end zone with him.

It was the final bit of shaky tackling on Arkansas' part and the exclamation point on an important early season win for the Rebels. Morris said he was disappointed in the team's tackling overall.

"I thought we had entirely too many missed tackles, especially out on the perimeter," Morris added. "We overpursued the ball, let them cut back on top of us, let the ball get stacked on us."

Pool, who recorded a team-high nine tackles in the loss (7 solo), said he was in no way, shape or form proud of the way the defense performed.

"Whenever you're missing tackles it's not a good thing," Pool said. "There's a lot of mistakes that we have to correct, and we're going to get in there, work hard, and this is just Game 2. ... Just comes down to execution, and we've got to get better at that."

A missed tackle by McClellion also helped set up Ole Miss' first score of the night. The sophomore took a poor angle on receiver Dontario Drummond, who then slipped down the sideline for a 26-yard gain to the Arkansas 35. Nine plays later, Corral found Moore from two yards out to take a 7-0 lead.

On Wednesday, Morris said he felt good about the way the Razorbacks tackled in space in Week 1. Arkansas was rather lackluster in that area on Saturday.

Morris' message to the team following the loss was clear: It's all about the response now.

Last season, the Razorbacks allowed their second-half collapse at Colorado State in Week 2 to carry into the following week against North Texas. The Mean Green then embarrassed Arkansas at home, leaving Fayetteville with a 27-point win.

Pool confidently said the Razorbacks (1-1) have plenty of good football ahead of them.

"Our culture is so much different than it was last season," he said. "We're going to take this loss and the mistakes we made today and get it corrected Sunday, then we're going to have a fresh mindset going into next week.