Bounced in Oxford: Hogs can’t keep up with Rebels in SEC opener 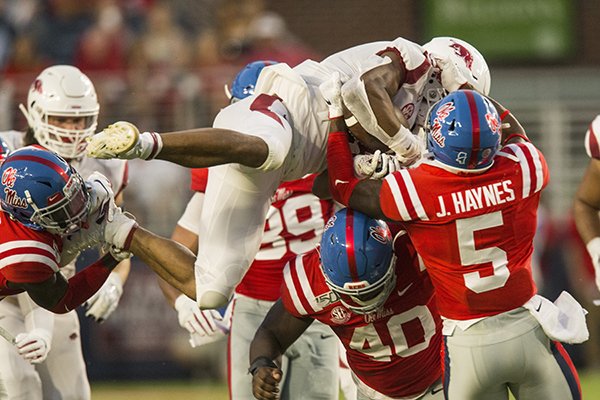 OXFORD, Miss. -- Ole Miss rebounded from an ugly season-opening performance and withstood a fourth-quarter Arkansas defensive touchdown to subdue the Razorbacks 31-17 in an SEC opener Saturday.

The Rebels (1-1, 1-0 SEC) found their offensive groove with a balanced performance behind freshman quarterback Matt Corral and bludgeoned the Razorbacks in the fourth quarter with a bruising run game before a crowd of 47,915 at Vaught-Hemingway Stadium.

Arkansas (1-1, 0-1 SEC) lost its 12th consecutive SEC game dating back to a wild finish in a 38-37 victory in Oxford two seasons ago. Ole Miss won its second in a row over the Hogs, breaking a two-game losing streak in the series at home and performing much better than in its 15-10 loss to Memphis a week ago.

"It's hard to win in the SEC on the road, and it's really hard when you make as many mistakes as we did tonight."

Arkansas missed an array of second-half tackles, had a touchdown called back by penalty early in the third quarter, bungled a couple of trick plays, failed on a fourth and 2 in Ole Miss territory and lost a fumble on the Rebels' side of the field just as the Razorbacks seemed to be gaining second-half momentum.

The Razorbacks also have a quarterback situation on their hands after Nick Starkel came on for Ben Hicks in the second half and provided a lift to what had been a moribund offense. Arkansas had 137 total yards and three points in the first half with Hicks running the unit and 224 yards in the second half with Starkel at the controls.

"I thought [Starkel] provided a spark," Morris said. "I thought he threw the ball well."

The Razorbacks had trouble establishing their running game against an Ole Miss defense that it ripped through last season for 300 rushing yards.

Ole Miss outgained the Hogs 237-61 on the ground and 483-361 in total offense. Arkansas tailback Rakeem Boyd had 67 yards on 17 carries, and the Razorbacks averaged 2.3 yards per running play, while Ole Miss nearly doubled that at 4.5 led by Scottie Phillips' 143 yards and two scores.

"They looked much more comfortable," Ole Miss Coach Matt Luke said of his offense, which generated 310 more yards than the 173 yards it had in a 15-10 loss at Memphis last week. "We did a good job of getting the ball to our playmakers in space."

Ole Miss, which converted 1 of 10 third-down plays last week, made 8 of 15 against the Razorbacks.

"We've just got to flush this out tomorrow," Arkansas safety Kamren Curl said. "Come back ready to work. We know we have a losing streak, but we've got to have faith and keep working to fix it."

Starkel relieved Hicks to open the third quarter and finished 17 of 24 for 201 yards and a touchdown. Starkel capped an 81-yard drive with a 6-yard pass touchdown on a fade to Koilan Jackson to pull the Hogs within 31-17 with 1:21 remaining, but it was too little, too late.

Hicks went 7 of 16 for 98 yards and directed one field goal drive in the opening half.

Ole Miss controlled the flow of the game and had a 17-3 lead early in the fourth quarter when the Razorbacks defense pulled off a takeaway and touchdown that elicited memories of wild plays in each of their last two victories in Oxford.

Corral was running around left end when he pitched wide to tight end Octavious Cooley as Ole Miss tried a misdirection move. Instead, the Razorbacks surrounded Cooley and held him up as Curl came in from his safety position and ripped the ball free.

Curl also scooped the ball and started a long run that included multiple broken tackles for a 69-yard fumble return touchdown. The score pulled Arkansas within 17-10 with 13:31 remaining, but Ole Miss didn't let things slip away.

The Rebels racked up 140 yards and a pair of touchdowns on their next two series to pull away, as they rushed for 89 yards in the final quarter and the Razorbacks missed a flurry of tackles.

"They have good players, and they made plays tonight that they didn't make last week," Arkansas linebacker Bumper Pool said.

"Whenever you're missing tackles it's not a good thing. Obviously, we're not proud of what we did tonight. There's a lot of mistakes that we have to correct, and we're going to get in there, work hard, and this is just Game 2."

The freshman Corral benefited from rejuvenated offensive line play and roll-out plays that helped maximize their run-pass option attack after the Rebels were pushed around by Memphis.

Arkansas had an apparent touchdown on its second possession of the second half when Starkel found Trey Knox, who broke a tackle and completed a 38-yard play, but the score was wiped off due to having an ineligible receiver downfield on an alignment mistake by Treylon Burks.

"It's disappointing to go over here and expect to play one way and then not play that way, not execute that way," Starkel said.