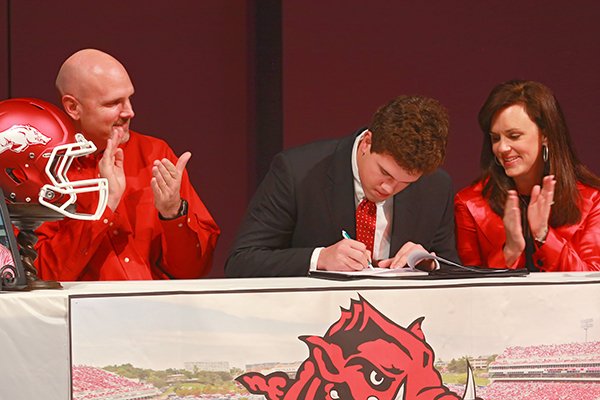 Pulaski Academy's tight end Hunter Henry sign a letter of intent to play football at Arkansas during a ceremony at the school Wednesday, Feb. 6, 2013, in Little Rock. At left is his father Mark Henry and right is his mother Jenny Henry.

Former University of Arkansas and All-Southwest Conference center Mark Henry has a wealth of knowledge about the recruiting process after going through it himself and having three sons do the same.

Henry inked with the Hogs in 1987 out of Little Rock Central, and he had a front-row seat when his sons Hunter, Hayden and Hudson were recruited by the Razorbacks.

"When I was recruited, it was in the dark ages," Henry said. "They didn't have internet, and literally the way coaches saw you, they had to come to your high school, and we didn't even have HUDL or VHS or any kind of tape."

Recruiting in Henry's day was much simpler.

He and his wife Jenny saw first son Hunter sign with the Hogs in 2013. He was an All-American and won the John Mackey Award as the nation's top tight end in 2015, and he is now in his third season with the Los Angles Chargers. Hayden was a part of the Razorbacks' 2017 recruiting class and is starting at the "Sam" linebacker for the Hogs. Hudson signed with Arkansas in February and is a freshman in Fayetteville.

"From my perspective, I think the recruiting process when Hunter started and where Hudson is, it's changed dramatically," Henry said. "I think the biggest impact on that is social media has played a very big role in recruiting, and a second big factor is now they have split up the official visits where now you can take official visits in the spring and early summer, whereas when Hunter went through it you could only take them in the fall."

Henry is contacted by former teammates and others in the state for advice on recruiting.

"Jenny and I really find ourselves really in a unique position in recruiting," Henry said. "It's a different animal, so a lot of people reach out to us asking for advice and things they need to do with their respective kids around recruiting. We've tried to help as many people as we can."

Parents from beyond the borders of Arkansas also reach out to Henry.

"Even people from out of state occasionally reach out to me and ask for advice around recruiting because it's a very complicated and challenging thing in today's age," he said.

Henry would like to see changes to the recruiting process to lessen the stress on the athletes.

"I think there's too much contact right now with schools and players," he said. "I would probably be most supportive of the NCAA having more built-in dead periods for kids. I'm a not a huge fan of the pressure that I think sometimes colleges put on kids to come up early to a campus. I think sometimes there's a pressure put in around that."

Twitter and other social media sites have made it easier for coaches to contact prospects, and Henry doesn't necessarily see that as a good thing.

"I think the ability to communicate through social media has the kids feeling the pressure to always respond to a coach or always be in contact with a coach during the week," he said. "I just think with school and high school football and just being a student and a kid, I think it just adds a huge dimension that I think maybe with a little bit of thought, there could maybe be some small changes that would change it a little bit."