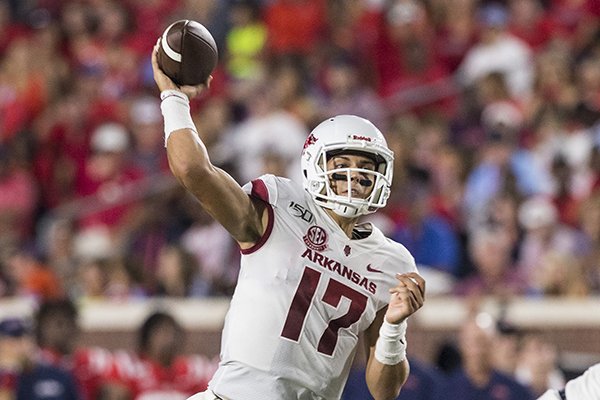 OXFORD, Miss. -- Ben Hicks was the University of Arkansas football team's starting quarterback in the first half against Ole Miss on Saturday night.

Nick Starkel replaced him as the starting quarterback for the second half.

So who starts when the Razorbacks play Colorado State next week?

Arkansas Coach Chad Morris wasn't ready to answer that question after the Rebels beat the Razorbacks 31-17 at Vaught-Hemingway Stadium.

"Well, we're not going to address that right now," Morris said. "This isn't the time or place right now to address it. We'll get back and evaluate like we always do."

Starkel started the second half -- with Arkansas trailing 10-3 -- and took every snap.

Hicks took every snap in the first half and completed 7 of 16 passes for 98 yards and was sacked twice.

Starkel, a junior graduate transfer from Texas A&M, completed 17 of 24 passes for 201 yards and 1 touchdown. He was sacked once.

"We didn't get the job done, so it doesn't really matter how I played," Starkel said. "I'd throw 10 yards and take a win over losing. That's how I've always been, and that's how I'll always be."

Arkansas freshman Trey Knox had six catches for 88 yards. He caught four of Starkel's passes for 42 yards, and had a 38-yard touchdown catch in the second half nullified by a penalty.

"Oh, he spins it," Knox said when asked about Starkel's passing touch. "It rips through the air. It's just so smooth to catch.

Starkel wasn't lacking for confidence when he got in the game.

"I'm not going to sit back there and make everything happen by myself because that's not my job. My job is to get the ball to them and let them make the plays. I told them that."

While Hicks, a senior graduate transfer from SMU, went through spring practice with the Razorbacks, Starkel didn't join the team until the summer.

"[Starkel's] smart," Knox said. "He's picking up the offense. So I think he'll be a great weapon for us."

"We had a trick [play] called, and it was to the right and he threw it to the left," Morris said. "Those things happen at times."

Morris was asked about the evaluation process this week for determining a starting quarterback.

"We're just going to step back from tonight, get in there tomorrow, and re-evaluate things and make a decision that's what's best for this football team," he said.

As was the case last season, the Razorbacks are struggling to find a starting quarterback.

Morris was asked about the frustration of going into the third game this season without an established starter.

"It's frustrating to walk back in that locker room with the work and effort that's gone into this program with our staff and our players and to see the disappointment in all of us right now," Morris said. "That's disappointing. I know this, this football team will respond."

But what about not having settled on a starting quarterback after two games?

"We were settled on a quarterback," Morris said. "Yeah."

But the Razorbacks aren't settled on a quarterback now, right?

"I didn't say that," Morris said. "I said we'd go back and re-evaluate and see, and we'll make a decision at that point."

Starkel didn't want to say whether he believes he did enough against Ole Miss to earn the starting job for the Colorado State game.

"We'll go back and we'll watch the film," Starkel said. "I felt pretty good out there, but obviously it's Coach Morris' decision, and I'm going to respect everything that he chooses to do."

The uncertainty at quarterback, Knox said, isn't an issue for the players, either.

In Arkansas' 20-13 victory over Portland State last week, Starkel played two series off the bench -- seven snaps total -- in the second quarter. He completed 4 of 5 passes for 48 yards, but he threw an interception.

Starkel said he found out at halftime Saturday night that he'd be starting the second half.

"I just need a crumb. That's all I've been saying."