Two more freshmen get to start 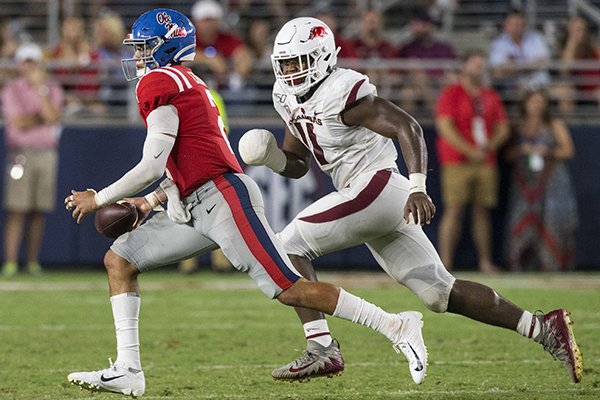 OXFORD, Miss. -- The University of Arkansas football team started true freshman linemen on both sides of the ball in the Razorbacks' SEC opener at Ole Miss on Saturday night.

Stromberg started in place of Austin Capps, who suffered an ankle injury in the fourth quarter against Portland State. Capps wasn't dressed out Saturday night.

Soli and Stromberg were among five true freshmen who started for the Razorbacks at Ole Miss. Wide receivers Treylon Burks and Trey Knox, and nickel back Greg Brooks all started for the second consecutive week.

Senior tight end Cheyenne O'Grady started after missing the Portland State game because of a knee injury. The Razorbacks went with a two tight-end set on their first offensive play, so junior Grayson Gunter -- who is from Madison, Miss. -- started again as he did last week.

Ole Miss lost junior starting linebacker MoMo Sanogo less than a minute into the game -- at the 14:21 mark of the first quarter -- when he injured his right ankle covering a punt return. He missed the rest of the game.

Harris out, back in

Arkansas senior starting linebacker De'Jon Harris left the game with an apparent leg injury with 3:54 left in the second quarter. Junior Grant Morgan replaced Harris, who returned to the game in the third quarter on the Rebels' second offensive series of the second half.

Arkansas sophomore safety Joe Foucha got his second takeaway of the season when he recovered a fumble by Ole Miss quarterback Matt Corral in the second quarter.

Corral kept the ball on a fourth-and-1 play from the Arkansas 30 and had the first down, but he lost the ball when he didn't bring it down cleanly after faking a pitch.

Foucha recovered the fumble at the Razorbacks 27. His first takeaway was an interception against Portland State last week with 11 seconds left that sealed the Razorbacks' 20-13 victory.

Arkansas senior Connor Limpert hit the right upright on a 36-yard field goal attempt in the second quarter, but the ball then bounced over the crossbar to pull the Razorbacks within 7-3.

The kick was through the goal post in the south end zone, the same as Limpert's 34-yard field goal in the final seconds at Ole Miss in 2017 that lifted Arkansas to a 38-37 victory.

Limpert wasn't so fortunate on a 43-yard attempt later in the second quarter, which was wide right.

Arkansas showed a new wrinkle to its offense with junior running back Rakeem Boyd taking direct snaps from the center in the Wildcat formation.

On three snaps to Boyd in the first quarter, he rushed for 3 yards, and made a quick flip pass to De'Vion Warren for a 1-yard gain and was tackled for a 3-yard loss by Ryder Anderson and Sam Williams.

In the second quarter, Boyd took a direct snap and lateraled the ball to quarterback Ben Hicks, who was sacked by Williams for a 4-yard loss.

Ole Miss starting senior safety Jaylen Julius was called for targeting against Arkansas tight end Cheyenne O'Grady with 5:39 left in the third quarter, but the call was overturned after a replay review.

So instead of having a 15-yard penalty and first down at the Ole Miss 15, the Razorbacks faced a fourth-and-2 at the 30 after Nick Starkel's pass to O'Grady went for a 13-yard gain.

Ole Miss then held Rakeem Boyd for a 1-yard gain and took over on downs.

It's not often a defensive player is called for an illegal block, especially a punter, but it happened to Ole Miss' Mac Brown in the second quarter.

Brown hit a 47-yard punt that Treylon Burks returned 15 yards to the Arkansas 30, where Brown made the tackle -- along with Armani Linton -- and was called for an illegal block.

The 15-yard penalty allowed Arkansas to start the possession at its 45.

Jones in the house

Dallas Cowboys owner Jerry Jones and several of his family members watched the Arkansas-Ole Miss game from a suite in Vaught-Hemingway Stadium.

Arkansas dressed in white pants, jerseys and helmets for the 10th time since 2012.

The Razorbacks came into the game 2-7 in all-white uniforms, including a 38-0 loss at Missouri in last season's finale.

Arkansas' two victories in all-white uniforms going into the Ole Miss game were at Texas Tech 49-28 in 2014 and 55-10 over Eastern Illinois in last season's opener.

Arkansas Coach Chad Morris has said he hopes to redshirt true freshman quarterback KJ Jefferson this season, but he dressed out for the game in his home state on Saturday night. Jefferson is from Sardis, Miss.

John Jenkins, who played at Arkansas in the 1970s and was the University of Houston's head coach from 1990-92, was at Saturday night's game scouting for the Hamilton Tiger-Cats of the CFL.