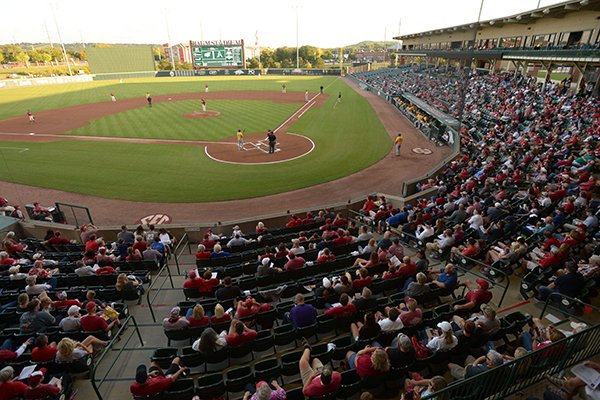 Fans watch a scrimmage between Arkansas and Wichita State on Friday, Oct. 5, 2018, in Fayetteville.

The Razorbacks' exhibition against Oklahoma is scheduled to be played Friday, Sept. 20, at Baum-Walker Stadium in Fayetteville. Arkansas coach Dave Van Horn said the scrimmage is tentatively scheduled to begin around 7:30 p.m. and will last 14 innings.

Van Horn said the teams were going to try to scrimmage Saturday, Sept. 21, but Arkansas' football game that day against San Jose State created too many logistical challenges.

The Razorbacks are scheduled to play Oklahoma twice in the 2020 season - at the Shriners Hospitals for Children College Classic in Houston on Feb. 28, and at the Sooners' home ballpark in Norman, Okla., at a date yet to be announced later in the season.

"They have some really good arms and it will be a good challenge," Van Horn said.

The Razorbacks will play at Oklahoma State on Saturday, Oct. 12, with a first pitch scheduled for noon. The 14-inning exhibition will be played at the Cowboys' former ballpark, Allie P. Reynolds Stadium in Stillwater, Okla., where Arkansas won an NCAA regional in 2015.

Oklahoma State is scheduled to open a new stadium in time for the 2020 season.

"With Arkansas, we're excited to welcome Coach Van Horn and his team — they've got a great ballclub that features some of the top position players in the entire country, along with a very talented pitching staff," Oklahoma State coach Josh Holliday said. "It will be a great challenge — we'll get to test our young team and see where we're at. It's on an off weekend for Cowboy football so we hope that our fans looking for something to do will come out and watch us play."

This is the second year college baseball teams can play up to two exhibition games during fall practice without the games counting against their regular-season schedule. Arkansas played exhibitions against Wichita State and Arkansas-Little Rock last October.