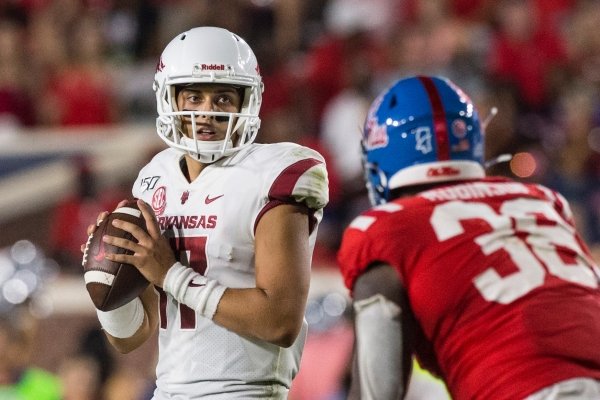 Nick Starkel, Arkansas quarterback, looks for a receiver in the fourth quarter vs Ole Miss Saturday, Sept. 7, 2019, at Vaught-Hemingway Stadium in Oxford, Miss.

FAYETTEVILLE -- Second-year University of Arkansas Coach Chad Morris did not want to start 2019 with the same quarterback shuffle the Razorbacks endured in his debut season, but that's what he's got heading into Week 3 with a 1-1 record.

Morris would not commit to a starting quarterback late Saturday after the Razorbacks fell 31-17 at Ole Miss.

The on-field results by quarterbacks Ben Hicks and Nick Starkel against the Rebels presented a stark contrast but also highlighted the very rationale Morris and offensive coordinator Joe Craddock used to name Hicks the starter for the opener.

The Arkansas offense was not as dynamic with Hicks behind center in the opening half. The Razorbacks had 137 yards total offense on 32 snaps with Hicks at quarterback. They scored three points, missed a field goal and went 3 of 9 on third-down plays. Hicks completed 7 of 16 passes for 98 yards and was sacked twice.

He threw hot and low for running back Devwah Whaley for a 9-yard gain on the right flank that could have broken open big, then delivered high and incomplete to Whaley on a seam pass from the Ole Miss 31 that could have gone for a score.

Starkel completed 17 of 24 passes for 201 yards and a touchdown and was sacked once. However, he threw the wrong direction on a would-be double pass in the third quarter, resulting in a 14-yard loss for Mike Woods.

The Razorbacks also had a 38-yard touchdown from Starkel to Trey Knox called back due to an alignment error, the kind of issue Hicks is adept at correcting before the snap, which is a point Morris emphasized two weeks ago.

Morris said the determination of a starting quarterback for Saturday's 3 p.m. game against Colorado State would be made after film review and further evaluation.

[Video not showing up above? Click here to watch » https://www.youtube.com/watch?v=scFo9i-Me_4]

Safety Kamren Curl made a heady play by stripping the ball from Ole Miss tight end Octavious Cooley, who was held up by Curl and end Mataio Soli, at the Arkansas 31 early in the fourth quarter.

But the second part of the play was even more spectacular. Curl scooped up the loose ball on one bounce and showed his open-field skills by navigating through would-be tacklers for a 69-yard touchdown to pull the Hogs within 17-10 with 13:31 remaining.

"Hit him up high, ball came out and just tried everything to get back to the end zone," Curl said. "Had to break a couple of tackles to get there, teammates helped out with the blocking."

Receiver Miles Battle missed a clean shot at Curl on the Ole Miss 35, then lineman Michael Howard made a futile diving try at the 10 before Elijah Moore whiffed in front. Curl got a nice block from freshman Greg Brooks Jr. on the Rebels' 20 on tailback Scottie Phillips to help seal the return.

"We got a little momentum with that play," Curl said.

The Razorbacks thought they had a tying touchdown midway through the second half against Ole Miss.

Trey Knox caught an intermediate crossing route from Nick Starkel, broke a tackle and charged into the end zone for what looked like a 38-yard score.

However, a yellow flag was lying on the grass near the Ole Miss sideline, where freshman Treylon Burks had been positioned on the line of scrimmage instead of off it. He made tight end Grayson Gunter, lined up in the slot, an ineligible receiver when he ran his shorter crossing route.

The touchdown was called back, the Hogs' momentum blunted.

"It hurts," Starkel said. "One second you're celebrating in the end zone and the next second someone's walking up to you saying, 'Hey, there's a flag. You have to go back.'"

Knox had a joyous celebration of what would have been his first touchdown catch interrupted.

"It was tough," Knox said. "I was getting too hyped. I was yelling, screaming, getting up with everybody. I turned around and the ref's in the middle of the field."

The Razorbacks brought out some new offensive material at Ole Miss and got a mixed bag of results, mostly non-productive.

The Wildcat formation with Rakeem Boyd taking direct snaps had a few positive results, but also resulted in an 8-yard sack when the Rebels got penetration during a double pitch from Boyd to De'Vion Warren to Ben Hicks.

The Hogs had a double-pass play called in the third quarter, but Nick Starkel threw a forward pass to the left instead of to the right. Mike Woods pulled back as if to pass, but kept it, ran backward and was tackled for a 14-yard loss.

The Razorbacks won the turnover battle by a 2-1 count against Ole Miss and cashed in one of their takeaways into immediate points on Kamren Curl's 69-yard fumble return touchdown.

Joe Foucha also recovered a Matt Corral fumble in Arkansas territory in the third quarter when it appeared defensive end Gabe Richardson tipped the ball away as Corral carried it high.

The Razorbacks did not convert the Foucha fumble recovery into points as they were stopped on fourth and 2 from the Ole Miss 30.

The Rebels did not cash in their lone takeaway, a muffed handoff from Nick Starkel to Devwah Whaley. Five plays after that, Curl raked the ball free from Cooley for his scoop and score.

Arkansas is third in the SEC and tied for 12th in the country with a plus 1.5 turnover margin.

Connor Limpert went 1 of 2 on field goals at Ole Miss to make him 30 of 37 in his Arkansas career and keep him atop the Hogs' career field goal percentage chart. His 36-yard try in the second quarter clipped the right upright and caromed downward but over the crossbar. His 43-yard try went wide right late in the second quarter.

Koilan Jackson took a rocky road to his first college touchdown and the Razorbacks' first passing touchdown of the season late in the game.

Jackson, a redshirt sophomore from Little Rock, went up for a fade route on the left edge and got a foot inbound to score on a 6-yard pass from Nick Starkel with 1:21 remaining.

Knox, a freshman from Murfreesboro, Tenn., caught six passes for 88 yards and broke tackles on several catches. He would have had his first 100-yard game if a 38-yard catch-and-run score had not been wiped out by penalty.

Curl had 6 solo tackles and 2 assists for 8 total tackles and also registered the play of the game. The San Diego native yanked the ball free from Ole Miss tight end Octavious Cooley in Arkansas territory and broke tackles on his 69-yard scoop-and-score touchdown.