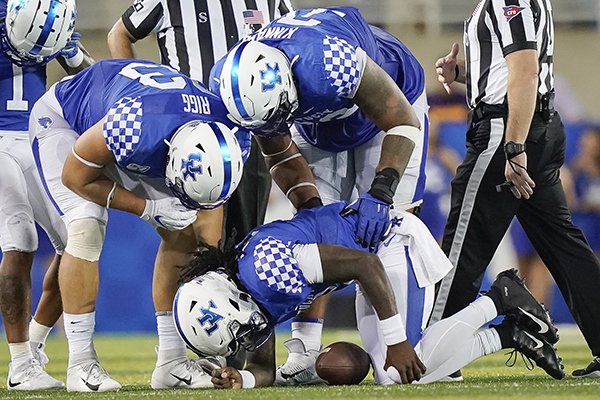 Kentucky quarterback Terry Wilson (3) is attended to by teammates after being injured on a play during the second half of an NCAA college football game between Kentucky and Eastern Michigan, Saturday, Sept. 7, 2019, in Lexington, Ky. (AP Photo/Bryan Woolston)

LEXINGTON, Ky. — Kentucky coach Mark Stoops says quarterback Terry Wilson will miss the remainder of the season with a torn patellar tendon that will require surgery.

Wilson was injured late in the third quarter Saturday night on a horse-collar tackle by Eastern Michigan defensive lineman Turan Rush. He was carted off the field for observation and an MRI on Sunday revealed the tear. A release from the school did not state when Wilson would have surgery.

Stoops says he's "sorry" for Wilson's injury in the release. He added that the junior QB "done so much for program the last two seasons, both in leadership and his production on the field."