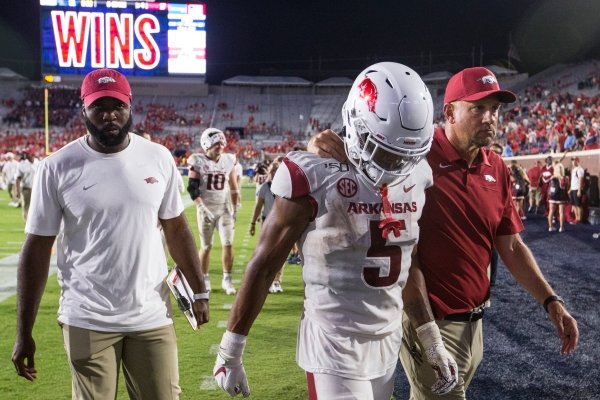 OXFORD, Miss. -- The University of Arkansas football team had another Power failure against Ole Miss on Saturday night.

Ole Miss beat Arkansas 31-17 at Vaught-Hemingway Stadium to drop the Razorbacks to 1-19 in their last 20 games against teams from Power 5 conferences, including 1-17 in SEC play.

Virginia Tech from the Atlantic Coast Conference and TCU from the Big 12 have also beaten the Razorbacks' during their horrendous stretch against teams their own size, so to speak.

Arkansas' only victory over a Power 5 team in its last 20 games was at Ole Miss two years ago, when the Razorbacks rallied to win 38-37 after trailing 31-7.

The Razorbacks have lost 12 consecutive SEC games and fell to 0-9 in conference play under second-year Coach Chad Morris.

"I promise you there's a lot of hurt going on in that locker room with those young men and that coaching staff," Morris said. "We can either stay on the ground or we can get back up.

Wide receiver Trey Knox, who caught six passes for 88 yards, was among 11 true freshmen to play against Ole Miss. It was just the first SEC loss those freshmen have experienced.

"We've just got to put this game behind us," Knox said. "We're going to evaluate tape, try to get better and work on ourselves.

"Because it's all about us at this point. We're not worried about anything else, but us being a better team, better staff, better position groups. I think if we just focus on us, we'll get better."

Quarterback Nick Starkel, who played in the second half in place of Ben Hicks and completed 17 of 24 passes for 201 yards, said the Razorbacks talked a lot in the locker room afterwards about how they will bounce back.

"This right here, we can't let this go over into next week," Starkel said. "For 24 hours we'll feel how we want about it and then we'll move on from it.

"I believe our team is going to do that. It's a different culture this year. We understand that we can't let one game hang on for two weeks."

Starkel, a junior graduate transfer from Texas A&M, said he's not concerned the Razorbacks have become accustomed to losing.

"I'm not worried at all," he said. "I have full faith in my teammates and my brothers out there that we can get the job done this year."

The Rams, who opened the season with a 52-31 loss to Colorado, broke a six-game losing streak by beating Western Illinois 35-13 on Saturday.

Last season, Colorado State rallied for a 34-27 victory over Arkansas after trailing 27-9. The Razorbacks lost to North Texas 44-17 the next week en route to a 2-10 season.

"My message was real simple and brief and to the point," Morris said of what he told his players after the Ole Miss game. "It's all about a response.

"A year ago this happened to us, and we let one team beat us a few times. We've got to respond and we're going to demand of our seniors that have been in this situation before to help us out. "

Junior safety Kamren Curl, who forced a fumble and returned it 69 yards for a touchdown to cut the Ole Miss lead to 17-10 with 13:31 left in the fourth quarter, said he's still confident Arkansas can have a good season.