State of the Hogs: Quarterbacks and Petrino 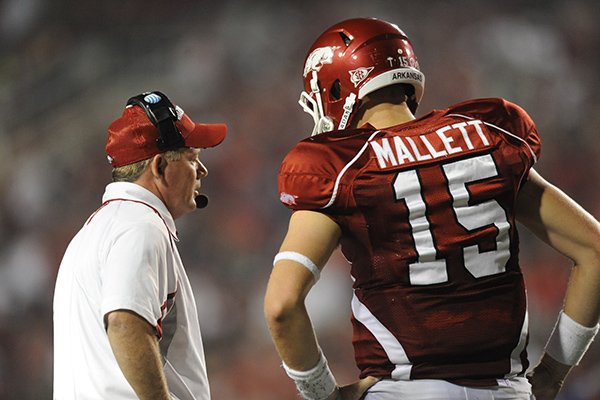 While Chad Morris confirmed speculation that Nick Starkel was the new Arkansas starting quarterback, Bobby Petrino was about 180 miles away in Little Rock taking questions about his days coaching his Arkansas quarterbacks.

Morris addressed his quarterback situation in Fayetteville. Petrino addressed some of his successes at quarterback in a question-and-answer format with David Bazzel at the Little Rock Touchdown Club.

It was the first real talk about Arkansas from Petrino – and first visit to the state – since he left Arkansas after being fired in the spring of 2012. He went 34-17 in four years as the Razorbacks’ coach, including 10-3 and 11-2 in his final two campaigns.

Petrino has had only two losing seasons in a 119-56 career record. The 2008 Arkansas team went 5-7 and Louisville was 2-8 when Petrino was fired last season.

There was little in Petrino’s remarks about his Arkansas termination other than an apology to both his players and the fan base. That came about five minutes into the Q&A with Bazzel as he confirmed that Little Rock businessman Frank Fletcher reached out with the invitation to return to Arkansas for the luncheon.

Petrino became teary-eyed as he interjected the apology while Bazzel told of the initial conversations of the invitation to speak at the touchdown club.

“I want to apologize to the fans and the players for the way (his Arkansas time) ended,” he said. “I also want to thank you from my family. You were great to us.

“You are a special group and a special crowd. You don’t realize how much you mean to the players and the energy you bring them.

“No question, the Hogs can come back. They need you more now than ever and you are what makes it special here.”

Bazzel revealed that speakers are compensated, sometimes with high fees. That was the intent with Petrino.

“I can tell you that when I brought up (pay), Bobby kept ignoring me,” Bazzel said. “He isn’t charging us one dime.”

Petrino said he “didn’t know what to expect” from the Little Rock crowd, but noted it was a lot of the same faces he recalled from his annual talk at the touchdown club.

“You are a special group,” he said, “and it was always (a good reception) no matter where I spoke across the state.”

The circumstances of his departure made talking to the team or fans impossible.

“It was hard,” he said. “The way it happened I’m truly sorry about. The hardest thing was not talking to the players, because they are the ones who had truly sacrificed.”

Bazzel moved the discussion into the highlights of Petrino's time at Arkansas, including some great victories in Little Rock with video clips to remind of the specific plays.

As Petrino always did on his weekly television show, it was in the wheel house for the great technique and polish Petrino put on the quarterback position. He went into detail on his three main starters: Casey Dick, Ryan Mallett and Tyler Wilson.

Bazzel asked Petrino if he was intentionally tougher on quarterbacks. Petrino smiled and said, “I always thought I was a player’s coach.”

“I liked to put pressure on quarterbacks in practice,” he said, then added, “The hardest thing for a quarterback is to take criticism – from fans, from coaches and from your teammates. But it goes with the position. You do have to learn to handle it.”

There was a tip of the hat to Dick, a senior who was benched at Mississippi State in favor of his younger brother Nathan in the second-to-last game of 2008. There was video of the throw from Casey Dick to London Crawford to beat LSU the following week after Nathan Dick was injured.

“Casey was one of the most positive players you could ever be around,” Petrino said. “He wanted to do anything you gave him. He did a great job of handling the ups and downs and that was one of his strengths.

“He was part of a big win over LSU and a big win at Auburn. He caught a TD against Auburn, threw one and ran in a two-point conversion.

“He didn’t have everything go right, but he ended his career on that pass to win the game.”

Petrino called Mallett one of the “unique” players he’d ever coached.

“He’s one of the tallest quarterbacks,” he said. “And, he was a great student of the game.”

Mallett sat out the 2008 season when the Hogs were struggling at 5-7. Petrino recalled the Sunday night practices that featured Mallett’s passing with the freshmen and backups.

“We had some tough losses,” he said. “Because of (Hurricane Ike), we had to reschedule some games and it made us play Alabama, Texas and Florida in a row.”

The teams were ranked ninth, seventh and 12th, respectively, at the time they played the Razorbacks. All three teams finished in the top six of the final AP poll.

“As coaches, we needed to see the light at the end of the tunnel and those Sunday practices were like that for us,” he said.

Just as he finished that question, Bazzel had video roll of Mallett’s 2010 pass to Cobi Hamilton at the end of the first half against LSU that went for a long touchdown.

“It doesn’t get any sweeter,” Petrino said.

Then, there was explanation about a fourth-down call that clinched another victory over LSU in Little Rock in 2010. That one lifted the Hogs into the Sugar Bowl. Mallett hit Joe Adams on a stop-and-go route to beat LSU safety Tyrann Mathieu.

“We practiced that play all spring,” Petrino said. “We made our defense put in (LSU’s) pressure, a max blitz. Joe toe tapped at six yards. The Honey Badger bit.”

There was a reminder of the conversation with assistant John L. Smith as Petrino thought about the decision "to go for it" on the fourth down play. Petrino recalled that Smith said, “We didn’t come here to paint.”

Petrino said Wilson’s ability to throw was only matched by his courage to take a hit.

“Tyler could really throw it,” Petrino said. “He threw some passes better than Ryan. “

He was “as tough as any quarterback” Petrino has coached.

“Tyler could take a licking and keep coming,” he said. “He showed courage.”

Petrino went through some of his other great offensive talents, too. He broke down the abilities of Greg Childs, Jarius Wright, D.J. Williams, Hamilton and Adams.

“We probably should have run Joe at tailback more,” Petrino said.

Wright, he said, was like Mallett in that coaching points only had to be made once.

“Jarius was a great learner,” Petrino said. “He could play all three (wide receiver) positions.”

“Cobi always had a smile,” Petrino said. “And, he had pretty hair. I was calling for him one time for a play and I couldn’t find him. On the next play, he was there and I said, ‘Were you combing your hair?’ He started laughing.”

Williams was not only a great tight end, but also a great personality. In 2010 he won the Mackey Award, given to the nation’s best at that position.

“He was as special as they come,” Petrino said. “He was so talented and tight end is like quarterback, a tough position to play.

“He could catch it, was tough to tackle and was a good in-line blocker. But he had a special personality, always with a smile on his face.”

“He’d screw around and I’d get on him,” Petrino said.

There was finally a meeting where the two came to an understanding of the problem.

“I told him when he goofed off and made everyone smile, it affected others like Ben Cleveland,” Petrino said. “You can’t do things that affect a performance by someone else. He understood.”

Petrino is out of coaching, but maybe not retired.

“I’m going to wait and see,” Petrino said when Bazzel asked if his next job would be in college or NFL. “I’m doing a couple of things right now.”

A book on coaching offense is in the works. Petrino said that was tougher than he imagined. He’s also helping Bobby Petrino, Jr., his son, with a Colorado company.

That sounds funnier than maybe it should have been. Petrino still can deliver a good, dry one-liner, even if he doesn't plan it.

Petrino opened with a story about his friends in Montana phoning him with word that Wally Hall, sports editor of the Arkansas Democrat-Gazette, was asking questions about him during a trip in Petrino’s early days with the Razorbacks. Petrino acknowledged Hall in the audience and said, "I did like Wally," then referenced Hall's vacation.

“They were calling from a bar,” Petrino said. “They wanted to know what I wanted them to do with him. I told them, ‘Be nice.’”

Everyone was exactly that to Petrino on Monday. He got a standing ovation when Bazzel brought him to the microphone. They were ready to hear about coaching quarterbacks.