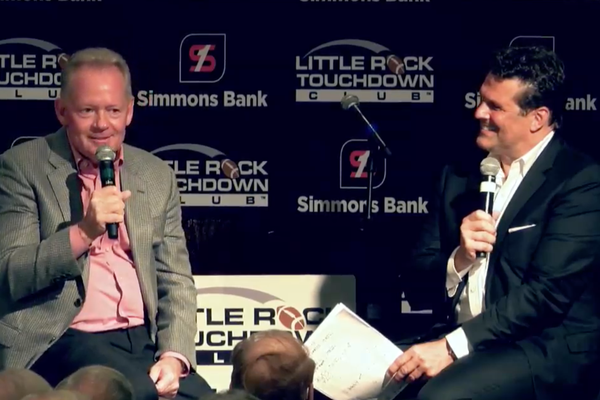 Former University of Arkansas head football coach Bobby Petrino and David Bazzel speak before the club on Monday in this still captured from video provided by the Little Rock Touchdown Club.

Former University of Arkansas football coach Bobby Petrino apologized to Razorbacks’ fans and players while speaking at the Little Rock Touchdown Club on Monday while encouraging attendees to continue to support the team.

Petrino, the club’s featured speaker for the day before a sold-out luncheon, said the event marked his first return to Arkansas since he was fired from UA in 2012.

When then-UA Athletics Director Jeff Long announced the decision to fire Petrino in April 2012, he cited misleading and manipulating behavior in an attempt to cover up Petrino's affair with a female employee.

Petrino on Monday didn’t talk in specifics about what led to his firing, but he said he wanted to make up for what happened.

“I wanted to be able to come here and apologize,” he said. “To everybody, the fans, the players, and truly tell you how sorry I am for the way it ended.”

Petrino said he also wanted to thank everyone for how they treated him and his family, a statement that brought a standing ovation from the crowd.

In the address, which took the form of a discussion between Petrino and David Bazzel, the former coach said he “didn’t know what to expect” coming back to the state after nearly seven years. He said speaking at the club reminded him of traveling around the state and the energy the audiences provided.

“You’re a special, special group,” he said. “And you don’t really understand how much effect y’all have on the players, the families, the support and how much that means.”

Petrino said the hardest thing when he left was “not being able to see the players.”

But the discussion didn't center entirely on Petrino's dismissal.

Asked about what traits Petrino looks for in quarterbacks, he emphasized the position is the hardest on the team to play. The former coach said he looked for leaders who lifted up others, were competitive but remained positive and were able to throw a football.

He also said potential quarterbacks must have enough intelligence to understand what the coach is trying to accomplish.

Bazzel asked Petrino whether Razorbacks fans can have hope this season.

“There’s no question the Hogs can come back,” Petrino responded, but added the team would need fans’ support as the Razorbacks face “the toughest conference in the country.”

Petrino, who was fired at Louisville last year during a 2-8 season, said he has started a franchise involving infrared saunas with his son and is writing a book on offense. He said he misses coaching.

“Saturdays are a little boring right now,” he said.