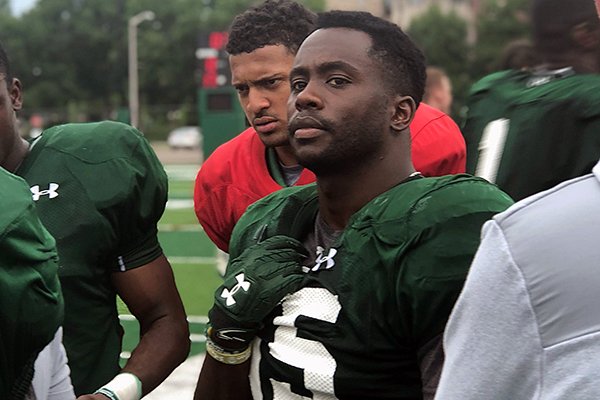 He has trained with U.S. Army Rangers and Green Berets and has supported both on missions he's not allowed to talk about.

He's a staff sergeant who has spent most of his 13 years in the Army working in special operations.

He's also the oldest player on a major college football team in the country this year, approaching his 33rd birthday and beginning his second season at Colorado State.

The Army, he said, taught him how to take care of his body and remain fit. And by admitting him into a special program to complete his final two years of college while remaining on active duty in an ROTC program, it provided Griffin an opportunity to pursue a dream he thought had died when he tore a hamstring during his senior year of high school.

"It was always a dream for me to play ball, and then when I got the opportunity to come back to school to finish a degree, I was like, OK, let me go to a school where I can see if I can walk on," Griffin said.

He looked at several programs. Temple, near his grandmother's home in Philadelphia. Houston, where he grew up. Southern California, for its rich football tradition.

CSU, he said, didn't enter the picture until after he missed his flight to Los Angeles to meet with the USC coaching staff.

Traffic at 3 a.m. on Interstate 25 from Fort Carson, where Griffin was stationed, to Denver International Airport was unusually heavy that morning last summer, causing him to miss his flight.

Figuring he was already halfway to Fort Collins at that point, he Googled the CSU football program, found contact information for longtime director of operations Tom Ehlers and accepted an invitation to drive up and visit.

"I tell people all the time it was God that brought me here, because there's no way in this world I even thought about it," Griffin said. ". But I came here, met Coach Ehlers, Coach (Mike) Bobo, who, by the way, is one of the most honorable people I've ever met — truly, I can't speak enough about him, honestly — him and Tom Ehlers.

"I said, 'I'll fully support you being an athlete, doing what you need to do,'" Thomas said. "It was the perfect storm in a positive way."

Griffin, 5-foot-10 and 194 pounds, spent the 2018 season as a safety on the Rams' scout team, running the opposing team's defense in practice each week while awaiting word from the NCAA on his eligibility. He was finally cleared to play this season just before the start of spring practices.

Bobo, though, noticed the way teammates looked up to "Pops," as they called him, and sought his advice. The coach selected Griffin as one of 10 leaders for the accountability teams he established in January. Bobo has had nothing but praise for how Griffin has handled that role.

Griffin, who was moved to running back two weeks into fall camp, sat out of the first two games of the season with a hand injury.

"Josh is a walk-on trying to find a role on this team, find a role on special teams for us," Bobo said. "But he has influence. He's older. He's done a great job of taking these guys under his wing. If something happens, the first person they call a lot of times is Josh, and I think that's great.

"I'm just ecstatic to have him on our football team. He's a great influence on these guys."

Because he's receiving his regular salary as an active duty officer in the Army while completing a bachelor's degree (his military benefits cover the cost of his tuition and fees), Griffin can afford to rent a house off campus. Teammates often come over and hang out with him. They play video games, watch movies and talk about life, Griffin said.

"I literally have a picture of waking up in my living room; we blew up an air mattress, we had two sleeping on the couch, another one sleeping on my other couch, you've got trash and popcorn and everything in the living room. There are three others on this blowup mattress, all playing video games.

"They're my kids. That's just how it feels most of the time, but I love 'em."

Griffin has taught teammates how to tie a tie, change a tire and swap out spark plugs on their cars, he said. Simple lessons he learned from his own father, a career officer in the Army.

He also tells them if they have to think twice about doing something to give him a call first so he can talk them out of whatever it was they knew deep down they shouldn't do.

Griffin tells them stories about his service, too. Those he's allowed to share, at least.

"He has prepared for war; it's real," sophomore safety Tywan Francis said. "We never go into depth, because he says some of the stuff is confidential.

"It's incredible. I commend him for it," Francis said.

Griffin didn't get started in football until his junior year of high school, at Ross Shaw Sterling in Houston. His mother, whom he lived with prior to that, wouldn't let the oldest of her five children play.

His father, whom he moved in with that year, had no such qualms.

Griffin, already one of the nation's top high school sprinters in track, was an instant hit. The hard-hitting, speedy cornerback was drawing plenty of attention from college recruiters.

Until he tore his hamstring.

Griffin went to college anyway but ran out of money after one year.

So he joined the Army.

Besides the intense physical training he went through as part of the Army's special operations units, Griffin played intramural football on each of the bases where he was stationed. And as an instructor in the Army's combatives program, which Thomas developed while both were at Fort Benning, he remained as fit as ever.

"He's a great example of what soldiers are like out there," Thomas said. ". When you support people through their goals, it's amazing what they can accomplish. We've been able to support Josh while he gets an education and plays athletics.

"I suspect great things for him in the future."

Griffin's ultimate goal is to take advantage of a waiver put in place over the summer by President Donald Trump that allows athletes at federal service academies and in ROTC programs to defer their military obligation if they are selected in the draft of a major professional sports league. He knows that's not likely but isn't giving up hope.

After all, he didn't start playing college football until 13 years after he graduated from high school.

"I tell people all the time, I can go to Fort Carson right now, and I can grab 20 more guys that can play on this team today, at my age," Griffin said. "It's amazing, not just the things we go through but how we take care of our bodies, how they teach us to take care of our bodies. At 32 years old, I can still hang with people that are 18."