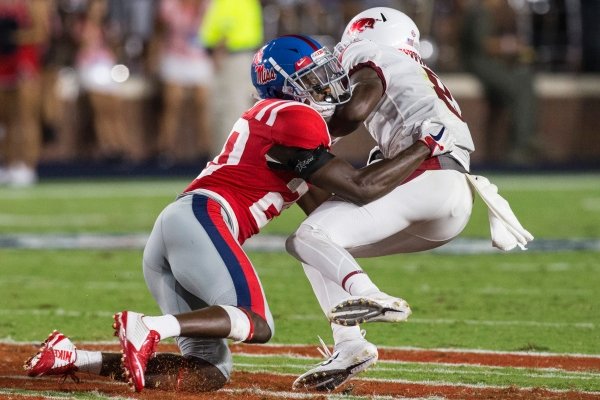 FAYETTEVILLE -- The Arkansas Razorbacks had bad luck on some of their "special" plays in last week's 31-17 loss at Ole Miss.

On potentially the biggest of them, quarterback Nick Starkel threw to Mike Woods on his left -- as opposed to Treylon Burks on the right side of the formation -- for what was going to be a long lateral and a pass.

On the play, tight end Cheyenne "C.J." O'Grady had released down field and was open as Woods was catching the forward pass from Starkel. On the other side, Burks had stepped back off the line to make sure Starkel's delivery would be a lateral, making a forward pass from that spot legal.

Woods drew back as if to throw, but if he had delivered a pass it would have been an illegal second pass. Instead, he pulled the ball down and was tackled for a 14-yard loss as he tried to elude defenders.

"We take in several specials to every game," Coach Chad Morris said. "That's just what you do. When they work, you look great, you look like a hero. Whey they don't, then it goes completely the other way. The ball was supposed to go to the right, to Treylon.

"That ball has never gone to the left on that case to Mike. So it was a mistake. We made a mistake on it. If it goes to the right, C.J.'s wide open running down the field, you know, and we're talking about something totally different right now."

[Video not showing up above? Click here to watch » https://www.youtube.com/watch?v=qf0XjIwAHwc]

Offensive coordinator Joe Craddock said the Razorbacks have worked on that play since the beginning of camp to have it ready for Ole Miss.

"Every time we've ever done it, we've thrown it to Treylon Burks, and so it's just one of those things, man," Craddock said. "We've got to coach it better, make sure they understand it better. Obviously we had C.J. wide open down the field for a touchdown if we threw it to the right guy.

"Those things, they're kind of feast or famine. If it's a big play, everybody is celebrating. If not, it's a big-loss play.

"We're going to take specials into every game, which is what we feel we have to do right now to create some momentum, create some big plays, some explosive plays down the field. We've just got to execute them a little bit better."

The Razorbacks had good and bad injury news from Sunday's practice to open the week.

Coach Chad Morris said defensive end Jamario Bell has probably not recovered enough from the knee injury he suffered Aug. 31 to be ready by Saturday, but offensive guard Austin Capps is likely on the brink of returning. Capps missed the loss to Ole Miss after coming out of the opener with a left ankle injury.

"Austin Capps, we hope to have him back out to practice on Tuesday," Morris said Monday. "He was not out there yesterday."

Capps tried to test the ankle one day last week and was not ready to compete on it.

Wideout and kick returner De'Vion Warren suffered a hand injury at Ole Miss but was able to get back in the game and have a 37-yard return.

Linebacker De'Jon Harris, who dealt with a cramping issue in the second quarter, went back in the game during the second half after a strong relief appearance by Grant Morgan.

[Video not showing up above? Click here to watch » https://www.youtube.com/watch?v=dx9pwWvreng]

Ole Miss got plenty of yards after contact in Saturday's victory over the Razorbacks, a point both Chad Morris and defensive coordinator John Chavis lamented.

"We've got to be a better defense, and as you saw, and I'm sure you did, tackling had a lot to do with that," Chavis said. "I'm not disappointed in our players and their effort. As I said, they gave us very good effort. But fundamentally, from the standpoint of tackling, we've got to be better. It's gonna get better, I guarantee that."

Chavis said most of the tackles the Razorbacks missed were due to over pursuit leading to cutbacks by the Rebels.

"We missed entirely too many tackles," Morris said.

Offensive coordinator Joe Craddock had indicated Nick Starkel would draw backup reps in the first two games behind Ben Hicks, which leads to the question: Will Hicks get certain reps as Starkel's backup Saturday?

"Ben will be ready. He's a veteran guy. He knows the system. He'll be ready if that time comes, but right now we want to see what Nick can do."

The Razorbacks' home game against San Jose State on Sept. 21 has been picked up for a 6:30 p.m. kickoff and broadcast on the SEC Network, the league announced Monday.

The Razorbacks and Spartans, of the Mountain West Conference, will meet for the first time. Arkansas will have alternated 3 p.m. and 6:30 p.m. kickoffs in its first four games, as it hosts Colorado State, also of the Mountain West, on Saturday at 3 p.m.

Colorado State freshman Dante Wright was one of four players named to the Paul Hornung Award honor roll for his performance in the Rams' 38-13 victory over Western Illinois on Saturday.

The 5-8, 168-pounder from Navarre, Fla., scored on a 75-yard catch on Colorado State's first offensive snap, and he added a 35-yard touchdown run en route to 176 all-purpose yards. Wright wound up with 108 receiving yards, 33 rushing yards and 35 punt return yards in the game.

The Hornung Award started in 2010 as a way to honor outstanding performances by versatile college football players in the vein of Hornung, a standout at Notre Dame and in the NFL.

[Video not showing up above? Click here to watch » https://www.youtube.com/watch?v=q6D9z_dO6RQ]

Colorado State guard Nouredin Nouili is questionable after missing Saturday's game with concussionlike symptoms. Nouili became the first true freshman to start on the offensive line for the Rams since 1996 when he was in the lineup for the opener against Colorado.