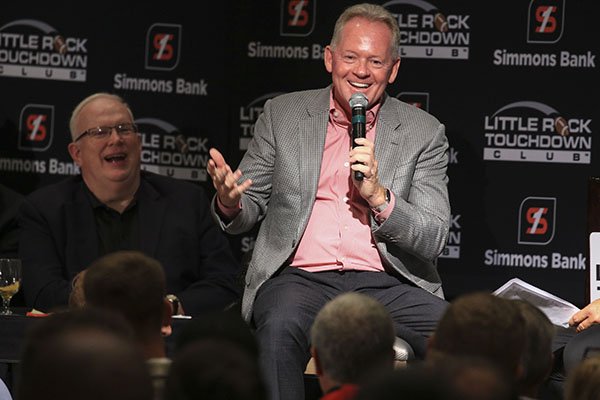 Seven years after being terminated as the University of Arkansas head football coach, Bobby Petrino returned to the Natural State to apologize for his actions.

In front of a sold-out crowd at the Little Rock Touchdown Club's weekly meeting at the DoubleTree Hotel, Petrino expressed remorse for covering up his relationship with a then-25-year-old employee of the Razorbacks football program.

"I wanted to be able to come here today and apologize to everybody -- the fans, the players -- and truly tell you how sorry I am for the way it ended," an emotional Petrino said. "I also wanted to come here and thank you for what this state did for me and my family."

Petrino was fired by then-UA athletic director Jeff Long in April 2012 after Petrino was not truthful about his relationship with Jessica Dorrell, who was hired as the football program's student-athlete development coordinator. Dorrell received $20,000 during the relationship with Petrino.

On April 1, 2012, Petrino and Dorrell were involved in a motorcycle accident on Arkansas 16 near Crosses in rural Madison County, according to Arkansas State Police reports. Petrino suffered injuries and was rushed from the scene by an Ozark couple.

[Video not showing up above? Click here to watch » https://www.youtube.com/watch?v=pvCo-A4dkT8]

Two days later, Petrino -- wearing a neck brace and showing visible scars from the accident -- held a news conference and said he was alone during the crash, misleading Long and other university officials.

Petrino was fired with cause, and the university did not have to pay him the $18 million buyout in his contract.

"He engaged in reckless and unacceptable behavior that put his relationship in the national spotlight," Long said in an Arkansas news release in 2012. "Coach Petrino's conduct was contrary to the character and responsibilities we demand from our head football coach.

"In fact, that is the very language that is included in his contract that he signed at the University of Arkansas."

Petrino said Monday he enjoyed his four seasons at Arkansas and how the university and the state still resonated with him and his family.

[Video not showing up above? Click here to watch » https://www.youtube.com/watch?v=ccYoSNFd__k]

Two of Petrino's biggest victories at Arkansas came against LSU at War Memorial Stadium in Little Rock in 2008 and 2010. Petrino said he enjoyed being back in Arkansas' capital city.

"Little Rock has and will always be a special place to me," Petrino said. "This is my first time back, and it brings back so many memories."

Petrino said he didn't want to comment on Razorbacks Coach Chad Morris out of respect for him, but he did have a message for Razorbacks fans.

'There's no question the Hogs can come back," Petrino said. "But they're going to need everybody's help here. Stay with them and keep supporting them. You are part of what makes the University of Arkansas a special job, there's no question about it."

When asked about his treatment of quarterbacks, Petrino joked that he thought he was known as a player's coach. But he said that he wanted to put pressure on quarterbacks, such as former Arkansas signal-callers Casey Dick, Ryan Mallett and Tyler Wilson, in practice to get them ready for games.

"The hardest thing for a quarterback is to handle criticism and take criticism," Petrino said. "A lot of it is put on the quarterback. But you made the choice to play that position and what goes with it. You have to learn how to handle it."

After his firing at Arkansas, Petrino coached at Western Kentucky in 2013 and Louisville for a second stint from 2014-18. He was fired by Louisville with two games left in the season last year.

Petrino said he hopes to get back into coaching again. He lives in Orlando, Fla., and is writing a book about offensive football.

"I miss being around the players," Petrino said. "I miss trying to help players excel, to be the best they can possibly be.

"Saturdays are a little boring right now. The competitive spirit is still there. If I get a chance to coach again, I'm going to do the best I possibly can."