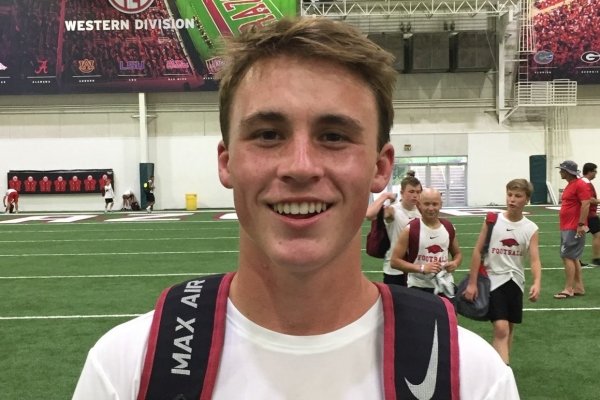 University of Arkansas quarterback commitment Chandler Morris started off his senior season with a bang with 664 yards of total offense in Highland Park's 66-59 victory over Rockwell on Aug. 30.

He completed 29 of 42 passes for 479 yards and 5 touchdowns, and had 18 rushes for 185 yards and 4 touchdowns in the Class 5A Scots' victory over the Class 6A Yellow Jackets. Morris and Highland Park set a school record for total yards in a game.

The Dallas Morning News named Morris its Offensive Player of the Week off of that performance. His feat was noticed by former Clemson quarterback and Houston Texan Deshaun Watson, who said "My lil brother!!" while quoting Morris' stats for the game on Twitter.

Watson became close to Arkansas Coach Chad Morris and family when the elder Morris helped recruit Watson to Clemson. Watson, who led the Tigers to the 2016 national championship, stays in contact with Chandler.

"It's a blessing to have him in my life and to see what he's had to go through to get where he is today and how much it motivates me to 'be legendary,' like he always says," Morris said.

Morris, 5-10, 172 pounds, had scholarship offers from Oklahoma, Clemson, Kansas State, Auburn, Colorado, Virginia Tech, Kansas and others before pledging to the Hogs in June.

Morris was named the Dallas Morning News Offensive Player of the Year after completing 266 of 411 passes for 4,055 yards and 46 touchdowns while throwing 6 interceptions and rushing 131 times for 652 yards and 19 touchdowns as a junior. He led the Scots to a third consecutive Texas Class 5A Division I state championship.

National recruiting analyst Tom Lemming of CBS Sports Network said Morris is a four-star recruit who can do it all.

"On film, Chandler shows the ability to extend plays with his feet and arm strength to keep the corners on their toes," Lemming said. "He has the quick release and accuracy you look for in a big-time signal caller.

"You can definitely tell he's a coach's son. He makes few mistakes. He's a leader on the field, and he has all the intangibles to need to be successful at the next level.

"He certainly has the ability to make every throw on the field. I'm very impressed with his overall game and, in my mind, there's no doubt he will succeed in major college ball."