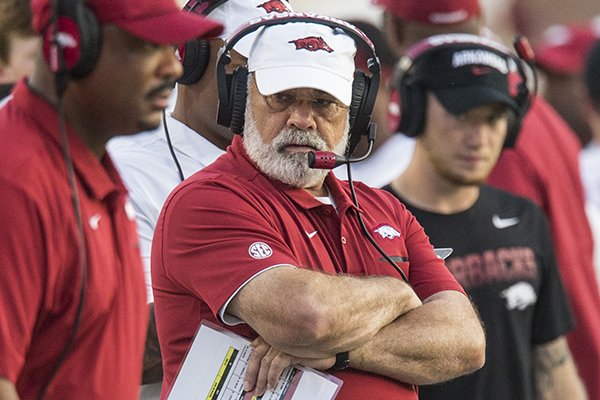 Arkansas defensive coordinator John Chavis is shown during a game against Ole Miss on Saturday, Sept. 7, 2019, in Oxford, Miss.

“I thought our defense kept us in the game, especially in the first three quarters,” Morris said. “We scored on defense (safety Kamren Curl’s 69-yard touchdown of a fumble recovery). We created some momentum that gave us a chance. But they were on the field entirely too long.”

Arkansas’ offense, with only six first-half first downs and on the first-half field just 13:42 to Ole Miss’ 16:18, takes some of the blame but shouldn’t inordinately.

“Defensively, we made too many mistakes,” Chavis said. “Usually the team that makes the fewest mistakes wins. From a defensive standpoint that was the case. Whether it was scheme or mistakes we didn’t do a very good job getting off the field on third downs. It was just slightly over 50-percent and that’s not good enough to win. It’s got to be at 70 percent. We only got two takeaways (fumble recoveries by safeties Joe Foucha and Curl). That’s not good enough.”

It’s up to a defense on the field too long to get off the field with stops or turnovers.

“We had too many missed tackles,” Morris said. “More than I can remember in the past. We had a couple of critical third down penalties that kept drives alive. And we just couldn’t overcome it.”

Fatigue seems a likely contributor, especially in the second half.

“No, I don’t think so,” Chavis said. “I don’t think it had anything to do with it. The tackles that we missed, most of them were over-pursuit. We’ve got to be able to leverage the ball and not let them cut back on us. We got an interference call on a big third down. We missed tackles on the sideline where if we had just used the sideline and pressed the ball to the sideline then we’re gonna be off the field. It’s fundamentals that we can improve and it’s what we’ve got to do. It’s going to get better.”

GOOD-BYE TO A GOOD FELLOW

The Razorbacks and St. Louis Cardinals lost an ardent fan, while Fayetteville lost someone regarded as one of its most hail fellows, well met, with Sunday’s death of Vernon Tarver, 79.

The former Pine Bluff Zebras quarterback became a Fayetteville fixture. After military service, he graduated from the UA in 1966 and remained here. Vernon was renowned as the realtor who could sell your house on Friday morning, lead sing “Sweet Lil’ Angel” with the fabled Cates Brothers Friday afternoon at the George’s Majestic Lounge Happy Hour, and Saturday host a pre-game/postgame party calling the Hogs into the night.