Next 2 vs. Mountain West will provide gauge for Razorbacks 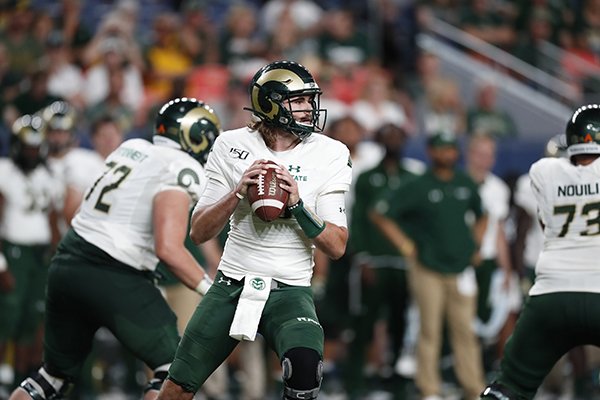 LITTLE ROCK — Making the case that 2-0 vs. Mountain West Conference teams is an undeniable sign of progress is difficult for some Razorback fans to swallow.

To accept that truth is to admit the Razorbacks are one of the worst teams in the SEC. In fact, the last three years, Arkansas’ 4-20 mark in conference play was two games shy of Ole Miss and Tennessee at 6-18. Vanderbilt was 7-17.

Ole Miss was a deserving two-touchdown winner over the Razorbacks last week and Vanderbilt opened 2019 with an SEC loss to Georgia. Tennessee, which doesn’t start conference until Sept. 21, has already lost to Georgia State and BYU.

Hard-pressed to defend Arkansas, a devoted fan could argue the SEC West has more top-caliber teams than the SEC East and that the Razorbacks would have recorded a couple more victories playing Vanderbilt and the Vols annually.

But, the immediate task involves the Razorbacks vs. Colorado State and San Jose State in Fayetteville on consecutive Saturdays. For that purpose, poll recognition for Mountain West teams and bowl relationships — both current and future — with the MWC illustrate where the conference’s football ranks on the national landscape.

• The Mountain West has not had a team in the Top 10 of AP’s final poll since Boise State’s 12-1 team was No. 8 in 2011. In the six years prior, MWC members BYU and TCU were ranked twice each, but BYU is now an independent and the Horned Frogs are in the Big 12.

• Not counting Alabama, the SEC has had seven other teams earn a top 10 ranking after the postseason during the same time period. The group includes Georgia three times, Florida twice, plus LSU, Auburn, Texas A&M, Ole Miss and Missouri. Last January, Alabama, LSU, Florida and Georgia were in the top eight and 12-2 Boise State of the Mountain West was No. 16. Ten teams with 10 or 11 victories were ahead of Boise.

• The Mountain West is a member of the Group of Five and, for the past five years, the highest-ranked team from those conferences gets an automatic bid to a New Year’s Six Bowl game. The Mountain West’s only qualifier was 11-2 Boise, which beat Arizona in the Fiesta Bowl and moved up two spots to No. 16 in the 2014 final poll.

• The Mountain West is proud to note it was the only Football Bowl Subdivision conference with at least three teams with double-digit wins during the 2018 regular season. The league also touts winning 57 percent of its bowl games the last 15 seasons, second only to the SEC at better than 60 percent, among the 10 FBS conferences and being the only Group of Five conference with six bowl reps each of the past six years.

• Currently, the Las Vegas Bowl has first pick of eligible Mountain West teams, but starting next year, Vegas will match a Pac-12 team against the SEC or Big Ten. If the Pac-12 or Big 12 doesn’t fill its spot in the Cheez-It Bowl, the MWC is the primary backup. Otherwise, Mountain West officials decide which league teams play in New Mexico, Idaho and Hawaii.

• The SEC champion has been in the College Football Playoff every year since inception of the CFP and the league’s best are so stout that even a two-loss conference champion would get serious consideration. The conference also is represented in the Sugar Bowl except when New Orleans is part of the CFP and, on occasion, in the Orange Bowl. After those commitments are filled, the not-so-shabby Citrus Bowl in Orlando has first choice of SEC teams.

• From 2020 through 2025, Mountain West ties include bowls in Boise, Albuquerque, Tucson and Honolulu, a new bowl in Los Angeles, and an ESPN-operated bowl likely in the Dallas-Fort Worth metroplex.

• In June, the SEC announced a six-year agreement with 10 bowls once the CFP, Sugar and Orange are filled.

The comparison leaves no doubt that anything less than victories vs. teams picked at or near the bottom of their Mountain West divisions will raise serious questions about whether Chad Morris is the right coach to return the Razorbacks to respectability.

Only a year ago, Arkansas began a six-game losing streak by failing to protect a 27-9 third-quarter lead over Colorado State. Some theorized that playing in a stadium nearly 5,000 feet above sea level zapped the Razorbacks, who gave up drives of 70, 96, 60 and 59 yards for 25 points in the final 19-plus minutes.

No excuse is good enough Saturday.

Making his first start at Arkansas, quarterback Nick Starkel’s performance will impact the outcome. However, whether he is good or bad or somewhere in between, nothing is a must like a W.