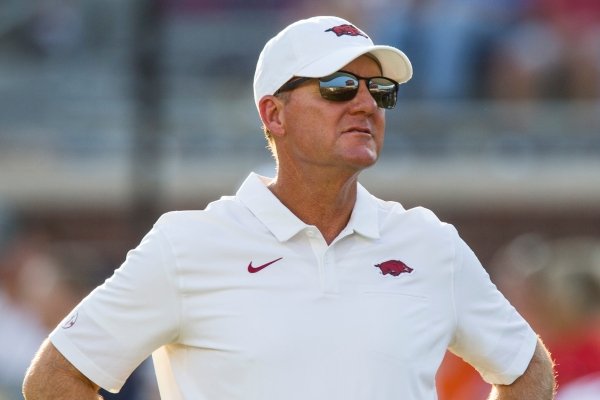 There was no team vs. team work in the open portion of today’s practice, but there were a few notable things to come from the 25 minutes and Chad Morris' pre-workout media session.

• Walking off the field at the conclusion of that window, what looked to be Arkansas’ first team offense was working vs. air. Nick Starkel was at quarterback, Rakeem Boyd at running back, receivers were Treylon Burks, Mike Woods and Trey Knox, I believe Cheyenne O’Grady was at tight end, and the offensive line (L–>R) was Myron Cunningham, Austin Capps, Ty Clary, Ricky Stromberg, Dalton Wagner.

• Colton Jackson was at practice, but, as you can read above, did not run with the first team offense. Morris said Capps would be limited Wednesday. It’s safe to say he’s questionable for Saturday. Capps did not travel to Oxford last weekend.

• Jamario Bell, Morris said, did not participate in practice on Tuesday, and I did not spot him at today’s workout. He is dealing with a knee injury sustained in the season opener against Portland State. He did not travel to Ole Miss either. Morris added on Monday it is unlikely Bell will play against Colorado State, which opens the door for true freshman Mataio Soli’s second career start.

• Trey Knox and Mike Woods both got stretched out pretty good in the first period of practice today. Woods has been doing this for roughly two weeks now, getting attention prior to hitting the field full go. Knox, who took a pretty big hit late in the game Saturday, is still limping around a little bit, Morris said. He will be ready to go Saturday.

De’Vion Warren (hand) was present as well. He doesn’t seem to be slowed by that injury. He was working at kickoff return today. Freshman receiver T.Q. Jackson looked to be full speed. He wore a black sleeve over his right knee.

• Being Sept. 11, the Razorbacks practiced to a few America-themed songs, including Springsteen’s Born in the USA and Lee Greenwood’s Proud to be an American. Morris said the team, which consists of many players who are too young to recall the day’s events, began today talking about 9/11. Players and coaches watched a video of families being recognized, he said.

“I was at school in Bay City (Texas) getting ready to play Houston Lamar,” Morris said Wednesday. “I just walked in (the office), and had actually been working on a game plan. An assistant coach said, ‘Have you seen this?’ I said, ‘No,’ and he turned the TV on.”

• Arkansas’ offensive captain this week will be running back Rakeem Boyd. He has rushed for 187 yards (5.2 yards per carry) and one touchdown this season. Boyd is also fourth on the team in receptions with four for 30 yards. The Razorbacks will also don the same uniform combination (Darren McFadden-era jerseys) as in their season opener.

• Arkansas defensive end Dorian Gerald, who strained an artery in his neck in the season opener, walked onto the practice field today and watched the Razorbacks’ defensive ends group work. He wore a shirt that read “SECURITY” across the back. Morris was asked about Gerald before practice:

• Scouts from the Chicago Bears and Philadelphia Eagles were at practice today, and former Razorbacks tight end Chris Gragg was present. He was at a practice at least one day last week, too.

Chase Harrell, who wore a green jersey during the open portion of practice on Tuesday, was back in standard red today. He appears to be dealing with something of a shoulder issue. Harrell came off the field following a drop during the Portland State game favoring a shoulder. He did, though, travel to and play at Ole Miss, but was not targeted in the passing game.

WR Jordan Jones (high ankle sprain; out around another week)