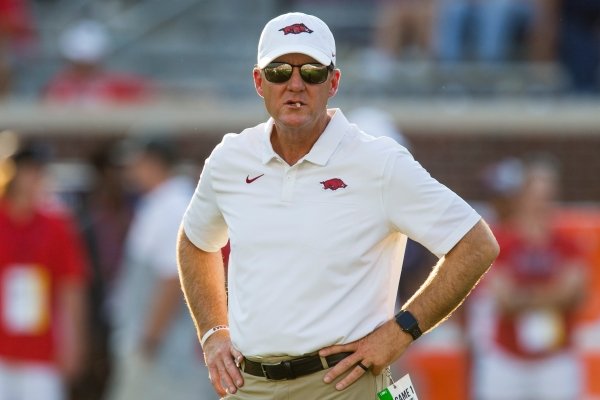 The newcomer who has received the most attention this week is quarterback Nick Starkel, the redshirt-junior graduate transfer who will start his first game for the Razorbacks on Saturday against Colorado State. Starkel last started a game in 2017 while at Texas A&M.

“Our guys have responded extremely well with Nick and appreciate his leadership,” Morris said. “Watching him take over, it’s been impressive this week.”

Starkel completed 17 of 24 passes for 201 yards and a touchdown last week at Ole Miss. Starkel entered the game in the third quarter in place of starting quarterback Ben Hicks.

Morris said Starkel, who did not go through spring practice at Arkansas, will carry about 25-30 percent of the team's offense into the game. He said Starkel will have the opportunity to make audibles, especially on first and second downs.

“If he sees it, he has the flexibility” to make a change at the line of scrimmage, Morris said. “We give him the leeway to change it or get to what he wants to get to. We ask all of our quarterbacks to have input in the game plan and what they like, what they don’t like. We would never want to call a play they don’t care for or didn’t feel like they could understand.”

Receiver De’Vion Warren said there has been a lot of communication this week with Starkel in an attempt to make him as comfortable as possible.

“We’ve been talking with him (about) what we see, what he sees - get on the same page and that’s been great this week,” Warren said.

Starkel is one of seven first-year players in the program who are expected to start this week on offense or defense. Left guard Ricky Stromberg is expected to start again after making his first career start against Ole Miss, although Austin Capps (ankle), who started the season opener, has practiced this week.

Morris said Stromberg was “extremely impressive” against the Rebels and graded as the team’s second-best lineman during the game.

“He did really well in pass protection,” Morris said. “He had a couple of breakdowns. We let a guy beat him across his face and had a tackle for loss, but overall Ricky responded well."

Soli recorded three tackles and had a quarterback hurry in his first career start at Ole Miss.

Morris praised the development of Soli and fellow freshman ends Zach Williams and Collin Clay. Williams has played the first two games and Clay has yet to play this season, but is expected to work himself into the rotation as the season goes along.

“When you talk to (defensive ends coach Steve) Caldwell, who is with them every day in meetings…they’re like a sponge,” Morris said. “They’re so hungry and they’re going to do what you ask them to do. You have to continue to stay on them and tell them, ‘This is the way this league is. It’s tough, it’s rough and you’ve got to continue to play physical and play fast.’ These guys did a good job of that.

“They had too many mistakes, they missed a few tackle, but that’s going to happen. They’re going to continue to get better every week.”

Morris was asked specifically about freshman tight end Hudson Henry and freshman defensive backs Jalen Catalon and Devin Bush. Henry, who went through concussion protocol in the preseason, has yet to play this season.

“Hudson has done a good job picking up the offense,” Morris said.

Catalon and Bush have been limited to special teams and played in their first game at Ole Miss.

“They’re going to play this year,” Morris said. “They’re just not there just yet. You’re going to see them more and more on special teams. They’re progressing right along. We’re excited about where they’re at and they’re going to have to help this football team this year.”