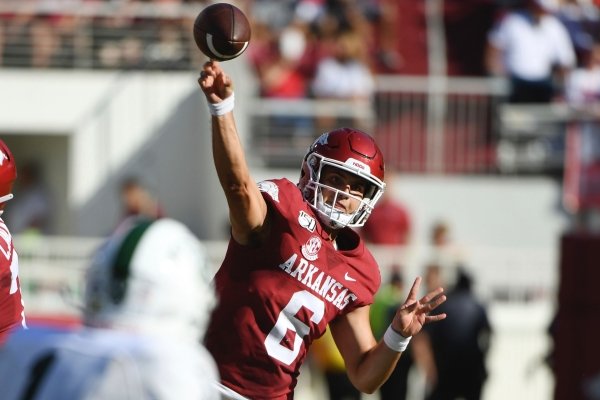 Interceptable passes (not picked off but could have been): 3 (16-yard gain to Tyson Morris, 15-yard floater to Mike Woods, incomplete on screen play to Chase Hayden in red zone)

Analysis: Hicks failed to truly impress in his debut with the Razorbacks, even against an FCS opponent. He completed less than 50 percent of his passes (14/29), but six drops also hurt his raw numbers. Tight end Chase Harrell had a costly drop on 3rd down that would have kept a drive alive, and freshman Trey Knox had one on 3rd down as well. Hicks also threw some balls in harm's way, specifically the above passes to Morris, Woods and Hayden. More talented defensive backs likely would have come down with interceptions on the first two. On the interceptable pass to Chase Hayden, he simply has to be much more careful in the red zone. Arkansas can not afford turnovers in that area and has to assure itself of at least three points in those trips.

Interceptable passes (aside from INT): 0

Analysis: Starkel's first meaningful action at Arkansas was less than ideal. He completed a pass to tight end Grayson Gunter for a loss of one yard, then left an end-zone shot intended for Treylon Burks woefully shallow and low, low enough for a Portland State defender to come up with an interception. On the Monday following the game, offensive coordinator Joe Craddock said he didn't want to call anyone out, but there was a depth issue on the route. Starkel should have put more height on the pass, he said. On his second possession, it began with an explosive play to Trey Knox for 38 yards. Miscommunication then became a factor as Starkel completed a pair of balls to Gunter and Rakeem Boyd as time expired in the first half. Starkel needed to be more aware of the game situation to ensure a possible shot to the end zone and/or field goal opportunity for Connor Limpert.

Inaccurate passes: 3 (completed pass to Devwah Whaley for nine yards, ball at his feet; incomplete to Trey Knox on 3rd down, too high; incomplete to Whaley down the middle of the field, too high)

Analysis: For the second consecutive week, it felt like a chore moving the ball with any consistency with Hicks running things. Arkansas totaled only 137 yards of offense in the first half, and 49 came on one play late in the second quarter on an interceptable pass to Trey Knox. Hicks was 3-of-8 passing on third down, and each completion went for a 1st down. Mike Woods had a critical drop on 3rd down in the first quarter in Ole Miss territory. The inaccurate passes listed above are all balls Hicks surely wants back. Although he completed a pass to Devwah Whaley for a nine-yard gain on 3rd down, if the throw is on the money Whaley picks up 15-20 yards and pushes Arkansas across midfield. The throw down the middle of the field just out of Whaley's reach late in the first half was a killer, too. Hicks was visibly frustrated after that miss. It could have tied the game 10-10. Arkansas did not have much of an intermediate passing game with Hicks in control either. He did not complete any of his four passes 6-15 yards downfield. He did, though, average eight yards per completion on throws 1-5 yards in depth.

Analysis: Overall, Starkel was pretty effective moving the offense (224 yards after halftime). What really stood out was how quick the ball came out of his hand on most throws. While Hicks did not show much of an intermediate game, Starkel was perfect there, completing all six throws 6-10 yards downfield for 62 yards and the touchdown to Koilan Jackson. He also took 13 shots - completing six - 11-plus yards down the field, which netted 138 yards. There's no question the Razorbacks are much more capable and dangerous pushing the ball vertically with Starkel. The junior did play relatively well at Ole Miss - he completed nine of his first 11 throws and his final seven. There were also a handful of mistakes to learn from, including throwing to the wrong side of the field to Mike Woods instead of Treylon Burks on a trick play and not properly aligning the formation on Trey Knox's 38-yard score. Arkansas also had to call timeout to regroup prior to running its first official play in the third quarter. So, he will need to be a bit more cognizant in certain situations, but that will come with more time in the system. His play against the Rebels earned him the starting job against Colorado State this Saturday. I am eager to find out how he handles his first start since passing for nearly 500 yards against Wake Forest in the 2017 Belk Bowl.