In Nick's time: Glimpses of Starkel show possibilities for Hogs 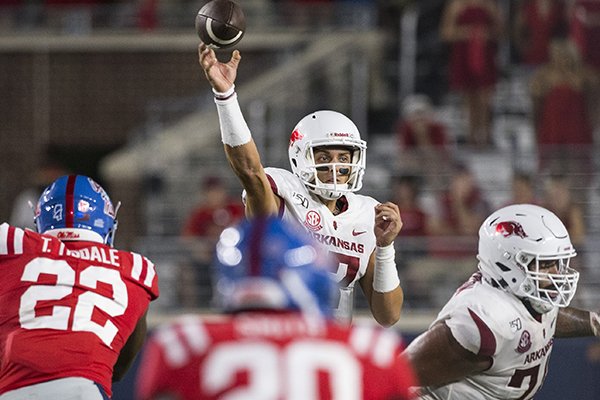 Arkansas quarterback Nick Starkel throws a pass during a game against Ole Miss on Saturday, Sept. 7, 2019, in Oxford, Miss.

FAYETTEVILLE -- A glimpse at the immediate future of the Arkansas Razorbacks' offense was on display in the second half of Saturday's 31-17 loss at Ole Miss.

If Starkel, a 6-4 junior, and the receivers can make connections like they did while Arkansas tried to rally from a 10-3 deficit, the downfield passing threat could open up better run-game opportunities for Rakeem Boyd, Devwah Whaley and Chase Hayden, and provide a little more free flow to the Razorbacks' offense.

The results of the switch to Starkel will be on display Saturday at 3 p.m. at Reynolds Razorback Stadium when the University of Arkansas (1-1) hosts Colorado State (1-1).

"I think we saw last week in the second half that there was a lot more consistency," Arkansas Coach Chad Morris said on Wednesday's SEC coaches teleconference. "We got into a little bit -- a lot more of a groove and a rhythm. So I expect to see that this week as well as moving forward with Nick."

With Starkel at quarterback, the Hogs had 224 yards of total offense on 35 snaps, an average of 6.4 yards per play. They had 12 first downs, including one by penalty.

"Honestly, Nick's arm strength, and I think he's able to push the ball down the field a little bit more," offensive coordinator Joe Craddock said when asked about a Morris remark about Starkel helping open things up. "That may put a little more fear in those DBs that they can't just stop the run.

"I think that's what Coach was referring to is in loosening those safeties up a little bit, you're going to have more yards in the run game. So that's something I think Nick can give and provide us, giving us maybe a little more running room inside."

The Razorbacks generated more second-half yards in Oxford, Miss., but they were hampered by mistakes and negative plays. Some of those were triggered by Starkel, such as a 14-yard loss on a pass to Mike Woods when Starkel threw to the wrong side of the field. The Hogs also had a 38-yard touchdown pass to Trey Knox nullified by a penalty due to an alignment mistake that a veteran such as Ben Hicks might have caught.

Hicks ran 32 plays in the first half, and the offense generated 137 yards for an average of 4.3 yards per play and 6 first downs.

The idea of "loosening" defenses is a plus for the Hogs with Starkel.

"He definitely provides an arm talent that stretches sideline to sideline and vertical as well," Morris said. "And then just from his overall preparation, he's been the same guy as he was when he wasn't [the starter]. He's still up there watching film. He's gotten a lot more input. That's what we really like is to see him respond the way he has."

The input part should translate to formations and calls that are better suited to him. In his last start, Starkel completed 42 of 63 passes for 499 yards, with 4 touchdowns and 1 interception, in the 2017 Belk Bowl against Wake Forest as a redshirt freshman for Texas A&M.

"I have a little more say in the game plan," Starkel said. "That's really big for me. It's everything I 100% know, and I know the receivers know 100% as well. If you know something 100%, you'll be playing really fast rather than second guessing yourself, do I do this or do that? That's what we're really look for this week, just really playing fast."

"It's going to be there when you get out of your break, so you better be ready or else it'll hit you in the facemask," Woods said.

The more threatening the passing game, perhaps the more space the Razorbacks can create for the run.

Arkansas managed 204 rushing yards in the season opener, but was held to only 61 yards and a subpar average of 2.3 yards per carry in the 31-17 loss to Ole Miss.

"The first half, they were loading the box on us," said Morris, adding that strategy was not out of the ordinary for the Rebels. "They bumped their front a little, slid their front, but we see that every week against our defense.

"We've just got to continue to maintain our blocks, play with a low pad level, and we've got to be able to hold on to the football, too. I thought we had some creases there."

Starkel said his plan is to deliver balls quickly to let the Razorbacks' skill athletes do their thing.

"I want to get some passes in there, get the guys the ball and let them do something with it," he said. "We did that and it opened up the box. Rakeem had a couple of good runs in there. That's kinda what this offense can do when it really starts rolling."

Despite playing in a little over one fourth of the Razorbacks' two games, Starkel ranks among the SEC leaders in several categories.

He is sixth among SEC "starters" with 8.6 yards per pass attempt, seventh with a completion percentage of 72.4% and eighth with an efficiency rating of 149.0.

Colorado State Coach Mike Bobo noted the emergence of Starkel last week and his team's struggles against the Razorbacks' run game, which racked up 299 yards on the Rams last year.

"It looked to me like they found their stride a little bit when they went with Starkel," he said. "They seemed to click a little bit better offensively. So I think we've got a big challenge. They're big up front. We had a hard time last year stopping the run. ... They've got some skill players in the two receivers [Knox and freshman Treylon Burks] that are kind of scary."