'Limping' Knox gets in practice 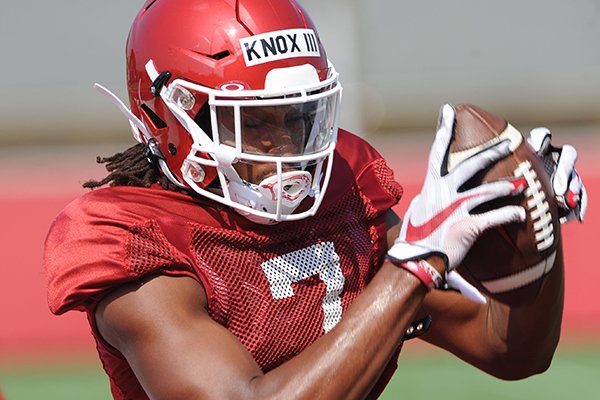 FAYETTEVILLE -- University of Arkansas receiver Trey Knox has worn his red No. 7 jersey at practice each of the past two days, but the freshman does not appear to be 100%.

Knox took a shot to his midsection toward the end of a 26-yard catch and run late in the fourth quarter of Saturday's 31-17 loss at Ole Miss.

He stayed on his feet after the hit by linebacker Donta Evans, which halted him in his tracks, and gained a few more yards, though he needed a moment to pop up and was clearly affected by the play.

Knox took a little extra stretch time after Wednesday's flex period and appeared to favor his right hip a bit as the Razorbacks broke into group drills, in which he participated.

[Video not showing up above? Click here to watch » https://www.youtube.com/watch?v=AHvvr3XlHJM]

Knox, speaking after the game Saturday, said he noticed an uptick in the physicality level.

"Oh, they were hitting out there, I'm not going to lie," Knox said. "I got stuck a couple of times, but I popped right back."

Knox, one of the most exuberant Razorbacks, detailed the play near the Ole Miss 10-yard line.

[Video not showing up above? Click here to watch » https://www.youtube.com/watch?v=joXpCwH8B6Q]

"I got the wind knocked out of me, oof," Knox said, describing the blow. "It was one of those."

Koilan Jackson, who came in and caught a 6-yard touchdown pass on the next play, has been splitting time with Knox at one of the wide receiver spots this week.

Senior left guard Austin Capps appears on the brink of rejoining the starting lineup this weekend after missing last week's game with an ankle injury.

Capps has been in his red No. 54 jersey -- as opposed to a green (no-contact) outfit -- each of the past two days, though he has not participated in all segments of practice. True freshman Ricky Stromberg drew decent reviews after starting in his place last week.

Defensive end Dorian Gerald, out for the season after straining an artery in his neck in the opener, has attended practices in casual clothing.

"He's doing well. Obviously he would love to be out there," Coach Chad Morris said of Gerald. "He's losing weight, and I told him, 'You can't lose too much weight on me.' "

Quarterback turned wide receiver Daulton Hyatt (flu) has not been at practice this week, Morris said.

Coach Chad Morris said Wednesday's team activities started with a team meeting that included a short video as a memorial to the terrorist attacks of Sept. 11, 2001.

"These young guys, it's a whole other generation," Morris said. "A lot of them weren't born yet. So we spent time talking and rolled our focus into Colorado State."

Morris was asked later about how the team discussed the attacks on their 18th anniversary.

"We watched a video and just shared with them where we were," he said. "Everybody remembers where you were on that day. One of those life-changing moments and how it's changed our world. As I shared with them, there was no such thing as clear backpacks then."

The music at practice on Wednesday struck a patriotic tone with some selections such as "Born in the USA" and "God Bless the USA."

Assistant head coach Jeff Traylor belted out some of the words to the latter song during a special teams period.

Part of the book

Speaking on his radio show Wednesday night, Coach Chad Morris said quarterback Nick Starkel has about 25% to 30% of the playbook at his disposal heading into Saturday's game. That puts him behind senior Ben Hicks, who had close to 60% in his arsenal heading into the opener. Hicks went 1-1 as the starter in the first two games.

Morris said Starkel has the flexibility to change the Razorbacks out of plays and audible to better plays.

Nick Starkel said he'll stick to his pre-game practice of wearing a Justin Bieber T-shirt rather than go to the head-banging extreme of LSU quarterback Joe Burrow.

Informed about Burrow's admission -- "I put my helmet on and then smash my head against the wall once before I go out every game" -- Starkel chuckled when asked whether he had any weird pre-game rituals.

"Other than the [Justin] Bieber stuff, no," Starkel said. "Not a big fan of hitting my head against the wall. Like I'll head butt some people with a helmet on, but not the wall."

Safety Kamren Curl has a distinction among defensive players in the FBS through two games.

According to the Arkansas football Twitter account, Curl is the only player in the nation with an interception, a sack and a fumble recovery for a touchdown. Curl had a 29-yard interception return and two sacks in the season opener, then yanked out a fumble and returned it 69 yards for a score in last week's loss at Ole Miss.

"It's a big part of what we do and work on," defensive coordinator John Chavis said of Curl's scoop and score. "The emphasis paid off.

"He's able to get the ball out and for it to bounce right back to him. Any time you score on defense, it's a big play. I just wish we would have done some other things on defense so we could have made it count."

Junior tailback Rakeem Boyd will represent the offense as a captain for Saturday's 3 p.m. game against Colorado State.

Boyd will join permanent defensive captains McTelvin Agim, De'Jon Harris and T.J. Smith, who have gone out for the coin flip each of the first two games.

Coach Chad Morris said Wednesday it was back to the Razorbacks' throwback jerseys for Saturday's game against Colorado State.

Arkansas unveiled its Darren McFadden-era jerseys during the summer, and Morris said the Razorbacks would wear them as often as possible. The Hogs wore red jerseys and helmets and white pants in the opener and would go back to them for Saturday's game.

Arkansas quarterbacks Nick Starkel (201 yards) and Ben Hicks (98 yards), with a 1-yard pop pass from Rakeem Boyd in the Wildcat formation added in, combined to throw for exactly 300 yards at Ole Miss on Saturday.