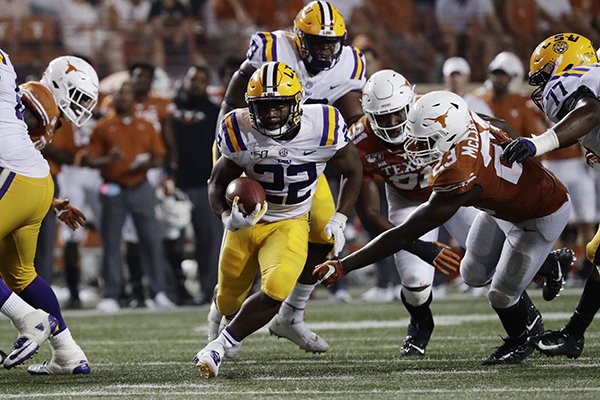 LSU running back Clyde Edwards-Helaire (22) during the second half of an NCAA college football game against Texas, Saturday, Sept. 7, 2019, in Austin, Texas. (AP Photo/Eric Gay)

The LSU-Texas rivalry is heating up after the Tigers beat the Longhorns 45-38 in Austin, Texas, on Saturday night when the temperature at kickoff was 98 degrees.

Tigers Coach Ed Orgeron said at his Monday news conference that the air conditioning wasn't on in the visiting locker room at Royal-Memorial Stadium.

Orgeron said LSU was prepared because he had been tipped off by someone on Louisiana Tech's staff that the air conditioning wasn't operating when the Bulldogs opened the season at Texas the previous week.

"I called Louisiana Tech, and they told us about it," Orgeron said. "So we did some things in the dressing room that [made the air flow] better. It wasn't great, but it was better."

After hearing about Orgeron's comments, Texas Athletic Director Chris Del Conte issued a written statement that neither Louisiana Tech nor LSU complained about a lack of air conditioning, and that UT officials had confirmed it was "in good working order" in the visiting locker room.

So what did Orgeron have to say about Del Conte's comments?

"Whether or not the air conditioning was on I don't know ... I was told it was not," Orgeron said Wednesday on the SEC coaches teleconference. "I took a precautionary measure of making sure the locker room was fine for us. That's all we did.

"We had air blowers on the floors on Friday so we could have some ventilation ... When we got there [Saturday], it was a little stuffy, but it was fine."

Louisiana Tech Coach Skip Holtz -- who lived in Fayetteville from 1977-83 when his father, Lou, coached the Arkansas Razorbacks -- said this week on a radio show in Monroe, La., that he didn't talk to anyone at LSU about Texas' visiting locker room, and that he didn't know whether or not it was air-conditioned.

"I do not know the answer," Holtz said on The Morning Drive 977. "I wasn't the one who talked to anybody in Baton Rouge. I don't remember [the locker room] being like a sauna, and I don't remember it being cool."

Orgeron confirmed Holtz wasn't the person who told him about the locker room situation in Austin, but he declined to reveal his source.

"I didn't call Skip, but I did talk to someone on the staff, and they said they felt it was very hot," Orgeron said.

So what does Orgeron have in mind for the visiting locker room's air conditioning in Tiger Stadium for the Longhorns' visit?

"I'm sure we'll have a plan or two to make them as comfortable as they can possibly be," he said with a laugh.

Let's just say Texas might want to bring some air blowers on the trip.

Auburn Coach Gus Malzahn said many years ago he began wearing a visor as a nod to Steve Spurrier, the longtime Florida and South Carolina coach who always wore one.

Malzahn, never known as a quote machine, seemed to channel his inner Spurrier on Tuesday when he opened his weekly news conference by saying he wished the Tigers had an earlier kickoff than 6 p.m. Saturday for their game against Kent State.

"Personally, I wish it was at noon," Malzahn said. "We'd have more time to prepare for our next opponent."

The comment sounded like a zinger directed at the in-state rival Crimson Tide a day after Alabama Athletic Director Greg Byrne and President Stuart Bell issued a joint statement complaining about the team's early kickoffs.

"We realize we've played more nonconference day games at home in September than any other SEC team since 2014," the statement read, without providing any statistics. "There have been a number of conversations with our conference office, and they also recognize the challenges these kick times present for our student-athletes and fans."

Malzahn opening a news conference by referencing an early kickoff time sounded like something Spurrier would have said about Tennessee or Florida State when he coached at Florida, or about Clemson when he coached at South Carolina.

Remember, Malzahn wasn't asked about Alabama's statement or kickoff times. He opened his news conference by saying he would prefer a noon start.

But Malzahn didn't admit he was having some fun at Alabama's expense when asked about it Wednesday on the SEC coaches teleconference.

OK, Gus, but weren't you trying to have a little fun with that comment?

"I was just trying to give my opinion," Malzahn said again.

Corbin rushed 35 times for 137 yards in two games this season before being injured in the third quarter of the Aggies' 24-10 loss at No. 1 Clemson when he was tackled after making a catch for a 4-yard gain.

"It's a huge blow," Texas A&M quarterback Kellen Mond told reporters this week. "Seeing how hard he's worked ... and he goes out like that with a hamstring injury is kind of devastating. But the next man's got to step up, and I know Isaiah [Spiller] and some of those guys behind him are ready."

Junior Sawyer Smith, a graduate transfer from Troy, will take over as Kentucky's starting quarterback in place of Wilson.

Smith played in 13 games last season for Troy and started the final seven. For the season, he passed for 1,669 yards and 14 touchdowns while rushing for 191 yards. His transfer gave the Wildcats a capable backup after Gunnar Hoak's decision to transfer to Ohio State.

"Sawyer was a very good pick up for us," Kentucky Coach Mark Stoops said. "He obviously was very much needed in case of this situation that popped up right here.

"We know that injuries are part of the game. I certainly feel for Terry, but it was very important for us to pick up Sawyer with transfers happening across college football."

Smith's first start for the Wildcats will be against No. 9 Florida.

"This environment won't be too big for him," Stoops said. "He's played a lot of football and played in big games and won big games."

Troy was 5-2 with Smith as the starter last season, and he was named MVP of the Dollar General Bowl when he passed for 320 yards and four touchdowns in the Trojans' 42-32 victory over Buffalo.

"Sawyer is very intelligent. He's accurate when he throws the ball down the field," Stoops said. "He makes good decisions and quick decisions."

Arkansas plays Texas A&M on Sept. 28 in Arlington, Texas, and plays at Kentucky on Oct. 12 after an open date.

Top of the hill

Mississippi State junior Kylin Hill wasn't among them, but two games into the season he's averaging 160.0 yards per game to lead the SEC.

Hill had 27 carries for 197 yards in the opener against Louisiana-Lafayette, and 14 for 123 against Southern Mississippi.

Bulldogs Coach Joe Moorhead said he doesn't believe Hill, 5-11 and 215 pounds, has surprised anyone within the Mississippi State program with his start to this season after he rushed for 734 yards on 117 carries last season despite missing the final two games because of a leg injury.

"Kylin has all the physical tools," Moorhead said. "Historically running backs in this system going back to my days [as offensive coordinator] at Penn State have had a lot of success.

"Hopefully, Kylin can continue to do the things he's doing. I'm very proud of his start. He combines small back characteristics in a big back body. He can get a play that's blocked for 1 or 2 [yards] 4 or 5 because of his pad level and his physicality, and he's a guy that when he gets in open space is able to make people miss."

Alabama is playing at South Carolina on Saturday for the first time since Oct. 10, 2009, when the Gamecocks upset the No. 1 Crimson Tide 35-21 to stop their 19-game winning streak.

"I remember we got the lining kicked out of our britches," Alabama Coach Nick Saban told media at his weekly news conference. "I don't know if you know what that means, but it means you got your butt kicked so bad, you don't have a seam in the back of your pants."

• Ole Miss junior linebacker MoMo Sanogo suffered a broken ankle covering a punt against Arkansas last week. He will undergo surgery and is expected to be sidelined for 10 weeks.

• LSU had been 0-8 in road games against nonconference teams ranked in the top 10 before winning 45-38 at No. 9 Texas last week.

Franks, a fourth-year junior, is on a roll going into the No. 9 Gators’ SEC opener at Kentucky on Saturday. Franks completed 25 of 27 passes — including 15 consecutive to start the game — for 270 yards and 2 touchdowns in Florida’s 45-0 victory over Tennessee-Martin last week. For the season, Franks has completed 42 of 54 passes for 524 yards and 4 touchdowns.

No. 9 Florida at Kentucky

CBS is showing the Alabama-South Carolina game, but that’s because of the Crimson Tide’s TV ratings power. Alabama is a 25 1/2-point favorite, so don’t expect that game to be competitive, especially with the Gamecocks starting a freshman quarterback. The Wildcats beat the Gators 27-16 last season to break a 31-game losing streak in the series. Now Kentucky (2-0) will try to beat Florida (2-0) in back-to-back years for the first time since 1976-77. The Gators are favored by 8.

Arkansas State at No. 3 Georgia

No. 2 Alabama at South Carolina

Kent State at No. 8 Auburn

Northwestern (La.) State at No. 4 LSU

— South Carolina Coach Will Muschamp on facing Alabama and Nick Saban, his former boss at LSU and the Miami Dolphins