Arkansas vs. Colorado State: How to watch and listen, forecast, team comparisons 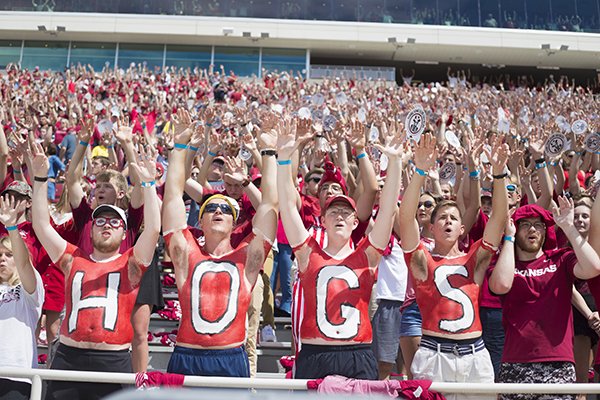 Arkansas fans are shown during a game against Portland State on Saturday, Aug. 31, 2019, in Fayetteville.

RADIO Razorback Sports Network can be accessed through local FM and AM affiliates, via the Arkansas Razorbacks Gameday app, via the TuneIn app or on ArkansasRazorbacks.com. Blackouts may apply. The Arkansas radio broadcast will be carried on satellite radio on Sirius Ch. 133 and XM Ch. 190.

WEATHER According to the National Weather Service, Saturday will be partly sunny with a high near 87 degrees in Fayetteville.

NOTABLE Arkansas (5 games) and Colorado State (6) are looking to snap long losing streaks against FBS competition. Both teams have defeated an FCS opponent this year….Arkansas’ Nick Starkel will make his first start at quarterback as a Razorback. Starkel completed 17 of 24 passes for 201 yards and 1 touchdown last week at Ole Miss after entering the game in the third quarter….The Razorbacks are 14-2 all-time vs. teams from the Mountain West Conference. Colorado State is 3-12 all-time vs. teams from the SEC….The Rams will play in Fayetteville for the first time. Colorado State’s three previous games at Arkansas have been played in Little Rock….Rams quarterback Collin Hill played five snaps vs. Arkansas last season. Hill tore his ACL six months prior to the 2018 game. Hill has completed 56 of 79 passes for 741 yards and 7 touchdowns this season, and been intercepted twice….Arkansas defensive end Jamario Bell (knee) is doubtful for the game, while offensive guard Austin Capps (ankle) is available after missing last week’s game at Ole Miss….Fifteen new inductees for the University of Arkansas Sports Hall of Honor, including Joe Johnson, Anthony Lucas and Wallace Spearmon Jr., will be recognized on the field at halftime.