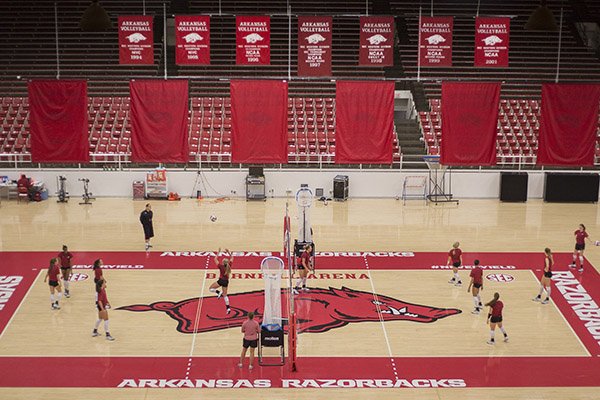 Barnhill Arena is shown during a volleyball practice on Monday, Aug. 24, 2015, in Fayetteville. The arena was once home to the Razorbacks' basketball programs but has since been repurposed into an 8,500-seat venue for volleyball and gymnastics.

Ron Brewer and Marvin Delph flew on the school plane along with Musselman, his wife Danyelle and UA associate athletic directors Jon Fagg and Kevin Trainor to Springfield, Mass., to attend Sidney Moncrief's induction into the Naismith Memorial Basketball Hall of Fame.

Brewer, Delph and Moncrief -- all 6-4 guards from the state of Arkansas -- led the Razorbacks to the 1978 Final Four and were dubbed "The Triplets" by Al McGuire, an NBA television analyst who the season prior had led Marquette to the national championship before retiring from coaching.

[Video not showing up above? Click here to watch » https://www.youtube.com/watch?v=7HPwkYcMvlA]

"There's no doubt with 'The Triplets,' " Musselman, 54, said of their impact. "Somebody my age that loves basketball, you're going to know who those three guys are for sure."

Beginning with "The Triplets" in the late 1970s, 9,000-seat Barnhill Arena was consistently filled for games and became known as one of the toughest venues for visiting teams in college basketball.

It stayed that way until the Razorbacks moved to Walton Arena for the 1993-94 season.

For one more day at least, Barnhill Arena again will be the gathering place for Arkansas basketball fans.

Arkansas will play its Red-White instraquad game at 3 p.m. on Oct. 5 -- the Saturday of the football team's first open date -- in Barnhill Arena.

Admission is free and seating will be on a first-come, first-served basis.

"We couldn't be more excited about having a throwback game and honoring our past and playing a game here in Barnhill," Musselman said on Thursday when he held a news conference on the arena court. "We think that it will be awesome for the fans.

"There's just so much tradition and history here that we wanted to have a fun night, and hopefully everybody will enjoy it."

The Red-White teams will be called "Team Eddie" and "Team Nolan" in honor of former Arkansas basketball coaches Eddie Sutton and Nolan Richardson.

"I had a great talk with Coach Richardson the other day," Musselman said. "I wanted to make sure that he thought it was a good idea [to play a game in Barnhill Arena], and he certainly did. He talked about a lot of the things that he had done in the past from a marketing standpoint."

Mussleman said he hopes a lot of former Arkansas players will be in Barnhill Arena for the Red-White game.

"We're going to reach out to as many players as we can and invite them back," he said. "Without question that's something we're going to start doing as early as next week."

Musselman, who wore a 1994 Arkansas national championship T-shirt on Thursday, said the idea to play the Red-White game in Barnhill Arena resulted from discussions among the coaching staff, administration and marketing staff.

"We're constantly trying to throw different ideas at each other," he said. "I just felt like a traditional Red and White game, that's kind of been done in the past.

"To do something new and different, and this might be the only time that we play basketball back here, it's kind of a neat thing."

Musselman said it might be fun to encourage fans to wear clothes from the past to celebrate a return to Barnhill Arena.

"We could even get the fans interested in dressing up in some throwback gear themselves," he said. "We're going to come up with what year this thing will kind of look like."

Musselman said he believes attending a game in Barnhill Arena will be exciting for older fans who did in previously and for younger fans who will experience it for the first time.