Improvement a must for Hogs' run defense 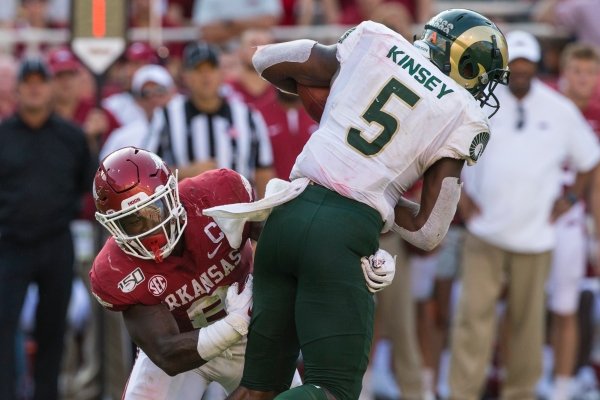 FAYETTEVILLE — The Arkansas defense took a punch in the gut from Colorado State on the second play from scrimmage Saturday.

Rams running back Marvin Kinsey took a handoff from quarterback Collin Hill and sprinted 75 yards for a touchdown. Razorbacks linebacker De'Jon Harris, who finished with 12 tackles in the game, ran left to assist in plugging the right side of the Colorado State line, but only Mataio Soli, Arkansas' freshman defensive end, got a hand on Kinsey as he burst through the hole.

Safety Kam Curl, the last line of defense on the play, then took a poor angle and was unable to make a play. Eighteen seconds in, the Razorbacks were down 7-0.

Colorado State rushed for 76 more yards in the first quarter, finishing with 151. For the game, Kinsey totaled 180 yards and the score on 20 carries, marking the second consecutive week in which an opposing running back topped the century mark on the ground.

The Rams, one week after Ole Miss rushed for 237 yards and two touchdowns against the Razorbacks, ran for 220 yards as a team. Arkansas defensive coordinator John Chavis prefaced his comments Monday by saying he is never going to get used to giving up 400 yards of offense.

"That isn't acceptable," he added. "We had two plays that accounted for about a 160 yards, and that's totally unacceptable. Both of those plays (Kinsey's score, Dante Wright's 75-yard touchdown catch) were easy plays we should have made. We didn't, and I take responsibility in that.

"There's some plays we've got to play better and, again, that goes back to coaching. We're going to get that corrected."

The Razorbacks' run defense, which has finished no better than 10th in the SEC since 2015, was a question mark in the preseason, and it appears to be an area of concern through three weeks. Arkansas ranks last in the conference in rushing yards allowed per game at 177.33, according to cfbstats.com.

Kinsey, aside from his long run, had three more rushes of at least 13 yards, and running back Marcus McElroy also had a 34-yard gain in the first quarter that helped set up Warren Jackson's 14-yard touchdown catch to pull the Rams within 21-14.

Chavis said there were too many instances in which Colorado State's backs got the edge in the run game. Those plays, he said, were due to alignment errors.

"That goes back to coaching. We've got to be able to do those things. We felt like we did it enough in practice, but we didn't get it executed and they were able to make a couple of runs on the edge. We've just got to be better."

After the bad showing in the first 15 minutes, Arkansas did stand tall on the ground the rest of the way, giving up just 69 yards rushing over the final three quarters. That response was among a handful of things Chavis was pleased with in the win. The Razorbacks' defense came up with three turnovers, although a fumble forced by true freshman Greg Brooks and recovered by Harris was negated because of a roughing the passer penalty on safety Joe Foucha.

The Rams were just 4 of 14 on third down. Arkansas is currently tied for sixth in the league - Vanderbilt, Alabama - with an opponent third-down conversion rate of 33.33 percent (14/42).

This weekend, Chavis' defense has a chance to impose its will on San Jose State's rushing attack. The Spartans, Arkansas' second Mountain West Conference opponent in as many weeks, averaged 2.07 yards per carry last season - last in the country. They rank 95th this season at 4.27 yards per attempt.

Freshman quarterback Nick Nash leads the team in rushing, totaling 115 yards and a score in two games. Senior running back DeJon Packer has run for 93 yards and a touchdown as well.

The Spartans will flash the option game when Nash is on the field, while senior Josh Love is more of a pocket passer - 413 yards, three touchdowns. Freshman receiver Isaiah Hamilton has a team-high 109 yards on eight catches, and Jermaine Braddock has two of the team's three touchdown grabs.

"They've got some athletes outside, they like throwing the football," Chavis said. "They've got two quarterbacks they're going to play. Their starter, he runs the offense and reads the secondary really well. He's good in the RPO game and making the right decisions. They have a true freshman that comes in and he's an athlete. He can throw the football, but he's really more of a runner.

"I think with the two quarterbacks and their differences, we're going to prepare for both of them."