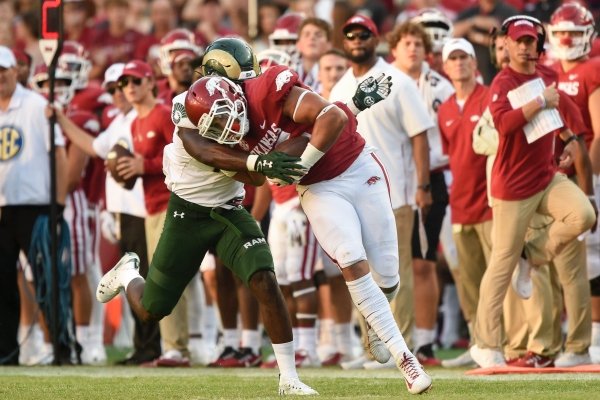 Arkansas Razorbacks tight end Cheyenne O’Grady (85) carries the ball for a touchdown during the fourth quarter of a football game, Saturday, September 14, 2019 at Donald W. Reynolds Razorback Stadium in Fayetteville.

FAYETTEVILLE -- Cheyenne O'Grady will remember the University of Arkansas' 55-34 victory over Colorado State for years to come.

O'Grady turned in a tackle-breaking 62-yard touchdown catch that gave the Razorbacks late breathing room in the shootout against the Rams.

The feat of perseverance slotted in at No. 2 on ESPN SportsCenter's list of top plays from Saturday.

Five Colorado State defenders hit O'Grady between the Rams' 45- and 30-yard lines but none could bring him down.

O'Grady got behind linebacker Cam'Ron Carter on an out-and-up pattern on second and 9 from the Arkansas 38 with the Hogs holding a 41-34 lead. Quarterback Nick Starkel dropped a pass to the senior from Fayetteville in perfect stride.

Carter made first contact with O'Grady on the Rams' 45-yard line and he was soon joined by cornerback Rashad Ajayi, safety Logan Stewart, linebacker Max McDonald and nickel back Marshaun Cameron for the next 15 yards as O'Grady clutched the ball tight and kept his legs churning.

Some of the defenders tried to impede O'Grady's progress and others stripped at the ball or rammed him to no avail.

"I really wanted to get to the end zone," O'Grady said. "It's been too long for me. Over a year."

O'Grady last reached the end zone when he scored two fourth-quarter touchdowns in the Razorbacks' 24-17 loss to No. 9 LSU on Nov. 10.

"I didn't see how he got out of it or anything, but he did his job that play," Starkel said.

"That was a huge play for us," Arkansas Coach Chad Morris said. "You know, he just kept his legs moving. Determination, will, drive. I thought that was a great finish by him."

Said Colorado State Coach Mike Bobo, "We have to get that guy on the ground when they're trying to strip him and make a play. That guy did a great job of keeping his feet and scoring a touchdown."

The Razorbacks lost several defenders for all or parts of Saturday's game, including linebackers Bumper Pool and Hayden Henry. Henry appeared shook up after his devastating, fumble-forcing shot that led to Ladarrius Bishop's 25-yard scoop-and-score touchdown late in the game.

Pool did not return after suffering an injury to his left arm or shoulder midway through the first half. He was driven to the turf by tight end Cameron Butler on a pass to running back Marvin Kinsey near the Rams' sideline. On the next snap, the last play of the first quarter, he got caught up in the pile and came up favoring his left arm. Pool played the first snap of the second quarter, a takeaway for the Hogs as Montaric Brown recovered a fumble forced by McTelvin Agim.

He did not appear to return after that, with D'Vone McClure and Henry taking a lot of reps. Pool wore a sling on his left arm during the second half while dressed in street clothes.

Additionally, the cornerback Brown missed parts of the second half with what looked like an issue with his right leg.

Safety Kamren Curl came out a couple of times with cramping issues and an injury to his thumb, but the junior participated in postgame interviews.

The Razorbacks had a masterful first quarter in their victory over Colorado State.

Arkansas racked up 137 rushing yards, 112 passing yards, 249 total yards and 10 first downs in the quarter. The Hogs were also 4 of 5 on third-down plays.

The Razorbacks scored touchdowns on their first three possessions -- a 24-yard catch by Trey Knox, a 14-yard catch by Chase Harrell and a 59-yard run by Rakeem Boyd -- and got a 54-yard Connor Limpert field goal to complete their 24-point quarter.

That marked the highest-scoring quarter for the Hogs since a 28-point second quarter vs. Eastern Illinois during a 55-20 rout in last year's season opener on Sept. 1.

The Razorbacks' 520 total yards represented a high-water mark during the 15-game Chad Morris era. The previous high had been 476 yards during a 37-33 loss to Ole Miss on Oct. 13 in Little Rock.

The stat sheet showed balance, with Arkansas having 35 runs and 35 passes. However, quarterback Nick Starkel was sacked once on a pass call, meaning the Razorbacks actually had 34 runs and 36 passes against the Rams.

The Arkansas football program released a postgame video in which Coach Chad Morris asked his players, "Isn't it fun to walk back into the club, and get the Club Dub [for 'W'] going?"

Morris praised the players for winning the game in the fourth quarter when "mental and physical toughness had to prevail" to signal the teams' response to a 31-17 loss to Ole Miss last week.

"This is a huge win for this program, make no mistake," Morris said. "Momentum is wearing an Arkansas jersey."

Nick Starkel had a big day against Colorado State with 305 passing yards and three touchdowns, but he had a chance for even bigger numbers.

Starkel overthrew a few receivers, including both Treylon Burks and Trey Knox on deep balls behind defenders, and Cheyenne O'Grady a couple of times, once in the end zone and again on a bootleg when the tight end had room to rumble.

"Yeah, thanks for pointing that out," Starkel said when asked about the missed plays. "I missed a lot of throws today. We're going to watch the film and correct it."

Colorado State Coach Mike Bobo did not take offense to the blow delivered to quarterback Collin Hill by Arkansas' Joe Foucha in the third quarter that left the junior hobbling. Foucha was flagged for a personal foul for going in low. He tripped going over teammate Mataio Soli, who was being cut-blocked by running back Marvin Kinsey, and his left shoulder went into Hill's left planted foot, causing his knee to buckle.

Hill hobbled around for two more plays before going out with the injury. The 6-5 Hill had left knee surgeries in both 2016 and 2018.

"It's tough," Bobo said of losing Hill again. "That kid is special. He got his knee hurt and comes back out there and has got a headset on. He's special kid and he's made up of the right stuff."

The Razorbacks were 6 of 12 on third-down conversions, the 50% rate a big jump after they went 3 of 10 in each of their first two games.

Arkansas converted its first four third-down chances against Colorado State while needing an average of 4.2 yards to convert.

Mike Woods showed good hands for a 6-yard catch on third and 2, then Trey Knox did the same on an in-cut for a 17-yard gain on third and 10. Devwah Whaley ran through a big hole up the middle for 24 yards on third and 1, then Nick Starkel found Chase Harrell for a 14-yard touchdown on third and 7 to finish off the Hogs' second touchdown drive.

The 6-2, 226-pounder from Little Rock had 7 tackles, 2 solo and 5 assists, broke up a third-and-2 pass, and forced a fumble that Ladarrius Bishop returned for a 25-yard touchdown.

CORRECTION: Bret Bielema’s last game as the University of Arkansas football coach was on Nov. 24, 2017, against Missouri. An earlier version of this story gave the incorrect date.