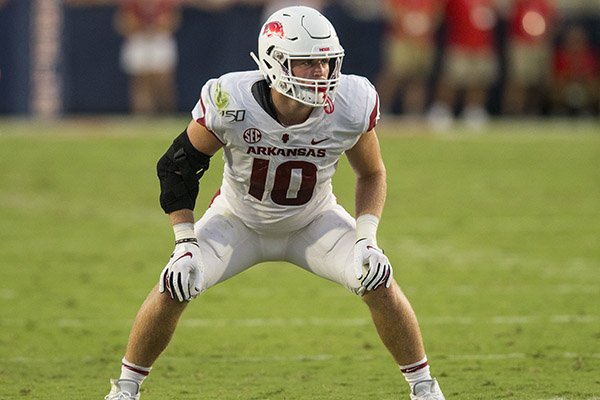 Arkansas linebacker Bumper Pool is shown during a game against Ole Miss on Sept. 7, 2019, in Oxford, Miss.

FAYETTEVILLE — Arkansas linebacker Bumper Pool is listed as a starter on the depth chart for the Razorbacks’ game against San Jose State on Saturday.

Pool was injured early during the Razorbacks’ 55-34 victory over Colorado State. Morris said he played through the injury for a short time.

“He landed on it and the adrenaline was still running,” Morris said. “Once we created a turnover he got excited and pumped his fist and felt, ‘Wow, maybe the adrenaline has worn off.’”

Despite missing most of the Colorado State game, Pool, the team’s weakside linebacker, is third on the Arkansas roster with 19 tackles this season, including a tackle for loss.

“We’ll definitely have those guys ready to go,” Morris said.

At defensive end Morris said senior Jamario Bell will return to the lineup this week after missing two games with a knee injury. Bell practiced Sunday.

Morris said redshirt junior receiver Jordan Jones (ankle) is expected to return by the Texas A&M game next week, but could potentially play in this week's game. Jones underwent a minor surgery on his ankle last month and has not played this season.