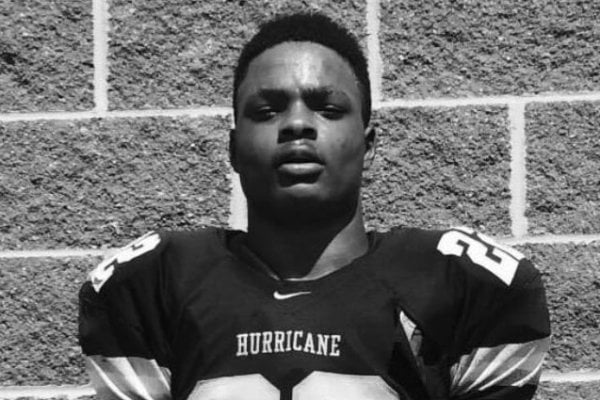 He started off with a bang in the Hurricane's 18-13 victory over Little Rock Catholic with 10 unassisted tackles, an assisted tackle, 4 sacks, 4 tackles for loss, 5 quarterback hurries and a fumble recovery.

"The Catholic game, he could have a good season highlight film off of one game," Jonesboro Coach Randy Coleman said.

"I am glad we don't have to see him again," said Fogleman, who has led the Rockets to two consecutive victories since the Jonesboro game. "He lived in our backfield. Very quick first step, fast, and good with his hands. Plays hard and seems like a good kid, too."

Stewart, 6-2, 224 pounds, 4.61 seconds in the 40-yard dash, picked the Hogs over scholarship offers from Houston, SMU, Kansas, Arkansas State University, Memphis and others in March.

Coleman said the past two opponents have made adjustments in trying to handle Stewart.

"Batesville and Conway have done a little bit more ... cut blocks, running away ... but what I love about Jashaud is he's chasing things down from the backside," Coleman said. "He's catching the running back downfield. He's still pressuring the quarterback, still getting sacks, but when people run away and do other things, he's still making an impact on the other team because they're having to change what they do. You have to know exactly where he is and make an adjustment."

"It's tough, but I keep fighting and pushing through," said Stewart, who has a 325-pound bench press, 500 squat and a 325 power clean. "That's really all it is just hustling and just keeping going even though they're double teaming."

"Jashaud is another quick-twitch athlete who can set the edge showing explosive speed to the ball," Lemming said. "He has enough speed to chase down players on the other side of the field. He's a smart, instinctive ball player."

He recorded what was then the nation's sixth-best combine rating (131.76) at the St. Louis Opening Regional in the spring. The five better scores were from defensive backs, running backs or receivers. His rating was ninth-best nationally after other regionals were completed.

Lemming and Coleman praised Stewart for giving maximum effort at all times.

"I just love going out and playing ball, even if the offense isn't clicking," Stewart said. "I just like to go out there and play. It doesn't matter what the score is, I just go hard."

Stewart recorded 89 tackles, 24 tackles for loss, 6 sacks, 10 quarterback hurries, an interception, a forced fumble and a recovered fumble as a junior.