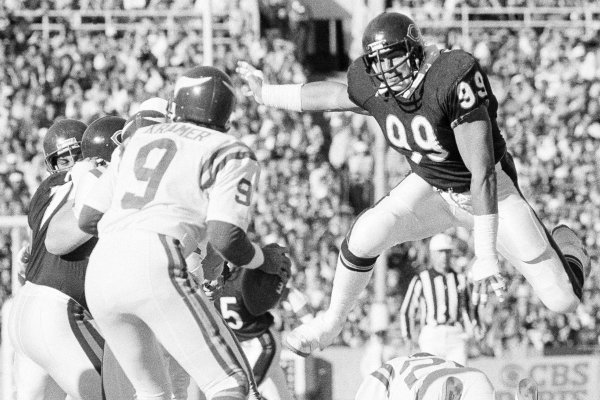 Chicago Bears tackle Dan Hampton leaps over a downed Minnesota Viking to corner quarterback Tommy Kramer during game in Chicago on Sunday, Oct. 28, 1985. The Bears won, 27-7. It was the eighth straight victory for the undefeated team. (AP Photo/Charles Bennett)

In his first appearance at the Little Rock Touchdown Club in six years, Dan Hampton took a moment to honor his high school football coach.

Hampton played for the late Bill Reed at Jacksonville in 1973 and 1974, but only after the veteran coach talked him into playing the game after Hampton broke multiple bones in his arms and legs when he fell out of a tree as a 12-year-old.

"How lucky was I to have a guy like Bill Reed?" Hampton said to the Little Rock Touchdown Club crowd Monday at the DoubleTree Hotel. "He took the time to tell the 6-6 scrawny, skinny kid playing a saxophone at the high school football game to get your a** out of the band and come out here and play football. He shamed me.

"The good Lord has amazing powers. You'll never know if you don't try, he said."

The meeting worked. Hampton became one of the top defensive players at the University of Arkansas and eventually an NFL Hall of Famer.

Playing for the Razorbacks was a time Hampton said he'll always treasure.

"We wanted to be great," Hampton said. "We wanted to play for you, the great people of Arkansas, and give you a great source of pride.

Arkansas has not played in a bowl game since the 2016 season. Hampton alluded to that fact during his speech as he mentioned the bowls he played in.

"Would you take that today?" Hampton said. "The Citrus Bowl is looking kind of nice, isn't it?"

Hampton was part of one of the greatest defenses of all-time, the 1985 Bears. He helped lead the Bears to a 46-10 rout of the New England Patriots in Super Bowl XX in New Orleans.

The Bears, who led the league in fewest points allowed (12.4 per game) during the season, set Super Bowl records for sacks (7), fewest rushing yards allowed (7) and margin for victory (36 points).

Hampton realizes that with the recent bowl-less seasons for Arkansas, the recruiting effort to get players to come to the school is harder. But he is confident that if players sign on with the Razorbacks, they can experience what he experienced in Fayetteville.

"How do you convince these young men and players to come here?" Hampton said. "If you go to Alabama, who cares? You're just another one in the long line.

"You come here, you can be special. You can be extraordinary."